Specialists Shane Hubbard, left, and Corey Mullins, inspect a Chinook helicopter that had just completed a mission and returned to Bagram Air Base in Afghanistan. Big Windy and other Army aviation units based in Germany will soon be returning home from a yearlong stint supporting Operation Enduring Freedom. (Kent Harris / S&S)

Specialists Shane Hubbard, left, and Corey Mullins, inspect a Chinook helicopter that had just completed a mission and returned to Bagram Air Base in Afghanistan. Big Windy and other Army aviation units based in Germany will soon be returning home from a yearlong stint supporting Operation Enduring Freedom. (Kent Harris / S&S) 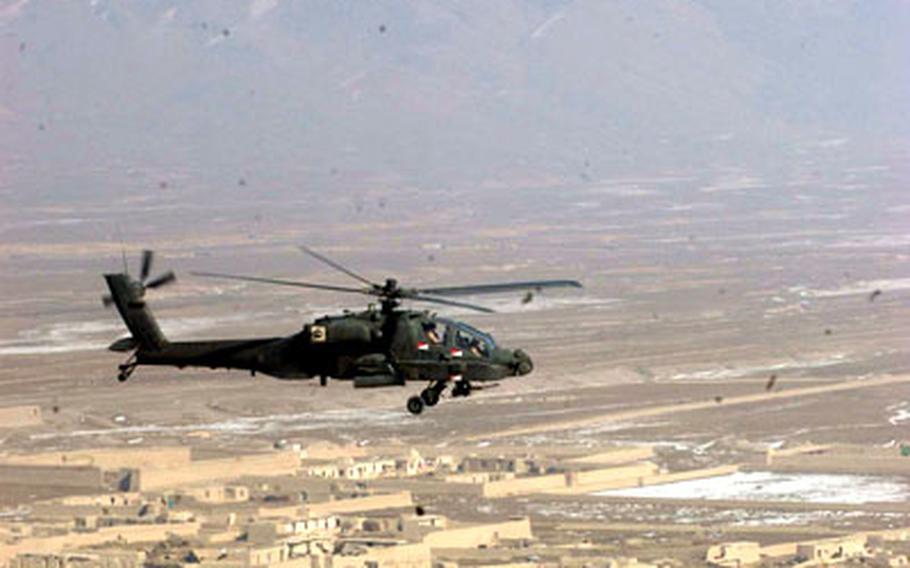 An Apache helicopter glides over patches of snow outside of Kabul, Afghanistan, while escorting a Black Hawk helicopter that was transporting a general officer. (Kent Harris / S&S) Spc. Sean Lewis looks out at the Afghan countryside over the turret of his machine gun as the Black Hawk he&#39;s aboard makes the short run between Bagram Air Base and Kabul. This flight took only about 15 minutes; others last for several hours. (Kent Harris / S&S)

BAGRAM AIR BASE, Afghanistan &#8212; A year away from family and loved ones. Living conditions and a lifestyle not exactly on par with the home base back in Germany. And a mission pace about three times that at Army bases in Illesheim or Giebelstadt, Germany.

Soldiers assigned to Task Force Sabre have spent the last 11 months getting their helicopters in the air and into one of the toughest environments in the world.

That hasn&#8217;t been true for all the 900 or so members of the task force. Some of those maintaining or fueling the AH-64 Apaches, UH-60 Black Hawks and CH-47 Chinooks that make up the task force did largely stay in the same place during their tour &#8212; one that is quickly nearing its end. But that doesn&#8217;t mean they were taking it easy.

Pilots and other crewmembers who take to the air say that was sometimes true for them as well. But they often found something to set each mission apart.

Sometimes that was tragedy or near tragedy. One of the Chinooks from Big Windy plummeted to the ground in April, killing five crewmembers and all the passengers on board. A Black Hawk returned to base a few days later after an intense firefight, carrying 57 bullet holes with it. All of the crew survived. An Apache went down while on a training mission in July. Both of those onboard survived, but suffered severe injuries.

Chief Warrant Officer 2 Clay Rekow, who had a close call of his own when an engine failed on his Chinook, said watching a fellow aviator go down isn&#8217;t easy.

&#8220;I think we dealt with that by paying our respects, talking with each other and getting back up and flying as soon as possible,&#8221; he said.

Lt. Col. Mike Swanson, the Sabre commander, said it took a while for the various components of the task force to get accustomed to working with each other. Crews from the various helicopter models tend to have their own lingo and ways of doing things.

Whose lingo won out? That depends on who you talk to.

&#8220;We brought all the other airframes around,&#8221; said Chief Warrant Officer 2 Paul Heitzenroder, a Chinook pilot, smiling.

&#8220;We all come out of basic training thinking our aircraft is the best,&#8221; said Capt. Kelsey Smith, an Apache pilot and troop commander. He estimates he worked with 18 types of fixed-wing or rotator aircraft from at least eight countries during his tour.

But most of the missions involved a mix of the three helicopters.

Swanson said such mixed task forces now will be the norm for Army aviators.

All of the dozen or so soldiers in his command interviewed seemed to agree with that sentiment.

&#8220;With the experience we&#8217;ve gained here, we bring a lot more proficiency to the job,&#8221; said Sgt. Michael Signorio, a crew chief for those maintaining the Apaches.

Most of those in the task force will take something besides experience with them back to Germany: memories.

Spc. Jayra Douglass was a member of the five- or six-member crews that would spend weeks at a forward operating base, waiting for helicopters to land. Some days there weren&#8217;t any landing to fuel up. Other days there were too many.

Others will remember the harsh mountain terrain, the quickly changing weather and the high altitudes at which they flew.

And those sent to help earthquake victims in Pakistan put that at the top of their lists.

Chief Warrant Officer 2 Michael Thompson said he had seen nothing like it during tours in Somalia, Iraq and Afghanistan.

Soldiers participated in a variety of missions during the yearlong tour: ferrying cargo and personnel, supporting troops or convoys on the ground, whisking away those in need of medical care and launching aerial assaults.

Although all those interviewed say they&#8217;ve improved their skills, they&#8217;re not exactly eager to put them to use in a similar deployment any time soon after they return to Germany.

Those with families in Germany or the States say they&#8217;ve been away from their loved ones too long. Others just need a break. Or a return to &#8220;civilization.&#8221;

That&#8217;s not to say they aren&#8217;t proud of their accomplishments. Spc. Rafael Villodas summed up his tour by recalling a common feeling: