A car sits perched on a curb Wednesday after floodwaters pooled in a low-lying part of the main post Sunday. Officials estimated the damage of Sunday&#39;s rainfall at over $2 million. (Jeremy Kirk / S&S)

A car sits perched on a curb Wednesday after floodwaters pooled in a low-lying part of the main post Sunday. Officials estimated the damage of Sunday&#39;s rainfall at over $2 million. (Jeremy Kirk / S&S) 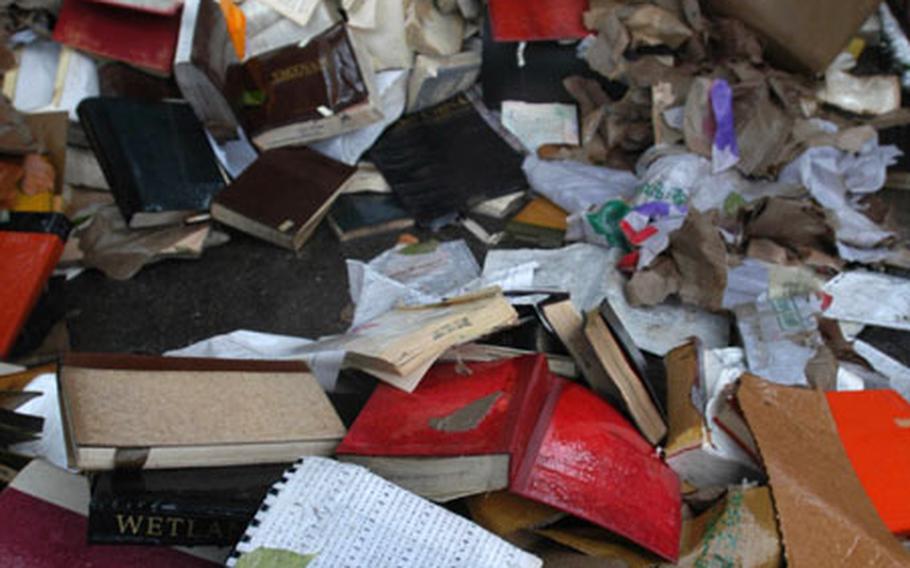 Hundreds of books were damaged Sunday when floodwaters ran through Yongsan Garrison&#39;s library. Officials estimated the damage to base buildings at over $2 million. (Jeremy Kirk / S&S)

YONGSAN GARRISON, South Korea &#8212; Heavy rains this week have caused more than $2 million in damage to the base library, recreation center and other buildings, officials said Wednesday.

Storm drains couldn&#8217;t keep up with the consistent, heavy rain and occasional deluges that pounded Seoul, causing water to pool in a low-lying area near the west side of Yongsan&#8217;s main post, said Maj. Steve Roemhildt, Directorate of Public Works director.

From Friday through Sunday, about 10 inches of rain fell, said Kim Yon-ju of the Korea Meteorological Administration &#8212; and the rain hasn&#8217;t stopped.

Water reached a height of 12 feet in the area by the Yongsan base wall adjacent to the Korean War museum, Roemhildt said. The area is one the lowest points on main post, getting runoff from Camp Coiner and nearby 8th Army headquarters, he said.

Real property damage, which excludes material owned by units inside buildings, was estimated at $170,000, Roemhildt said. The 176th Finance Battalion headquarters, Gallery and post office had some water damage, he said.

Power was out on main post from about 7 p.m. to midnight Sunday, Roemhildt said, adding that the upgraded electrical system worked as planned and tripped a circuit.

At least six cars parked in the heavy flooding area were damaged, said John Nowell, 34th Support Group spokesman. Posted signs still warn of heavy flooding; on Wednesday, one car was perched on a curb, pushed there by floodwaters.

Twelve inches of water came in the back door, and 8 inches through the front door, said Chae Sang-yun, librarian. The deluge waterlogged books which had been boxed to clear the shelves during renovations started Aug. 18.

Fans were set up to dry out the flooring, and workers were busy moving boxes. But Wednesday, hundreds of books sat outside in the rain, trashed because pages had turned to mush.

The renovation project had been slated to take a month. &#8220;I think it will take more time,&#8221; said Chae, standing among boxes of the soaked books and puddles on the floor.

The facility may need complete replacement; damage was estimated at $2 million, Frankovich said. Bowling leagues have been suspended.

About 2 inches of water also entered the Main Post Club, now under renovation. The basement, which houses the Underground Club, has tile on the floor that may be easier to clean up, Frankovich said. The damage to the facility still is being estimated, he said.

A new restaurant, Reggie&#8217;s, should still be on schedule for opening in November, Frankovich said. The Moyer Recreation Center, opened again in March after a nine-month renovation, took on up to 2 feet of water but a damage estimate was not available, he said.

MWR has taken photos and documented the damage, Frankovich said. A claim will be filed with the Army Central Insurance Fund, he said, and should not affect MWR funding.

How to file a claim

If U.S. Forces Korea servicemembers or civilians at Yongsan Garrison have experienced flood damage to their personally owned vehicles or quarters, they immediately should contact the U.S. Armed Forces Claims Service-Korea or local claims offices outside Yongsan.

USAFCS-K is on the second floor of the Community Services Building at Yongsan. The telephone number is 738-8111.

In addition, potential claimants should:

&#8226; Attempt to mitigate damage by actions including drying out car mats, emptying vehicles of water, dry-cleaning water-damaged clothing and cleaning rugs. If items that could have been salvaged are allowed to mold and deteriorate beyond repair, claimants may not be entitled to compensation because they had a duty to lessen any damage by drying out the items promptly.&#8226; Contact insurance companies to determine whether their policies cover such incidents.&#8226; Photograph or videotape the damage, or call USAFCS-K so an investigator can come out to photograph the damage.&#8226; Not dispose of damaged property before contacting the claims office, unless it becomes moldy or presents a health risk. Even then, it should be photographed before disposal.

&#8226; In areas plagued by frequent flooding below ground level, store items off the floor.&#8226; Avoid driving or parking in or near drainages and low-lying areas susceptible to flooding. Take extra precautions when driving near water puddles to avoid hidden pot holes or loosened manhole covers.&#8226; During storms, turn off and unplug all electronic devices such as televisions, microwaves, computers and stereos.&#8226; During power outages, keep refrigerator and freezer doors closed to prevent food spoilage.