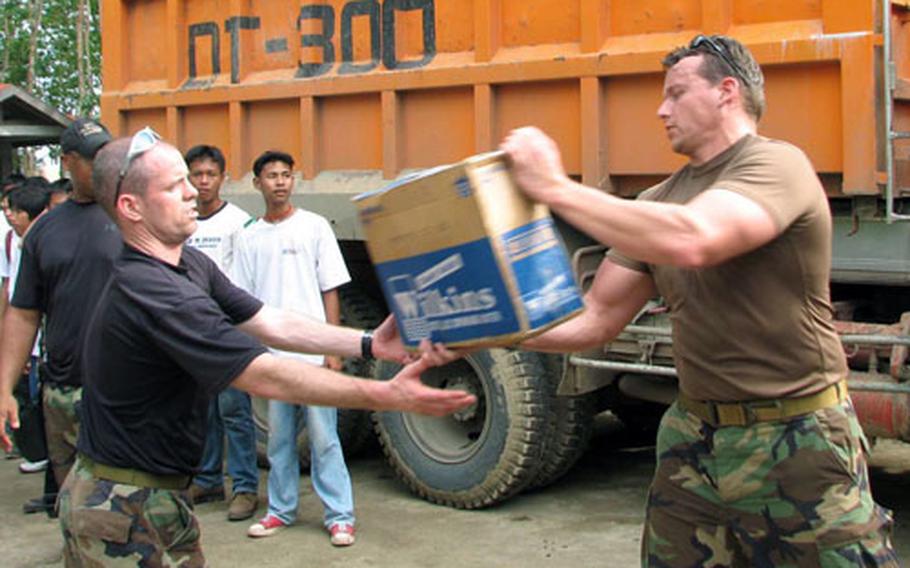 Capt. Charles Brisbois, left, hands a case of water to Capt. Mark Van Weezendonk during humanitarian relief operations in southern Leyte. Both are from the 31st Rescue Squadron stationed at Kadena Air Base, Okinawa. The 18 pararescuemen and combat rescue officers on the scene are medics specially trained for confined-space rescue, adverse terrain and mountain climbing operations. (Catherine Talento / Courtesy of U.S. Army)

CAMP FOSTER, Okinawa &#8212; Philippine and U.S. forces, diverted from the annual Balikatan exercise, suspended their desperate digging Thursday at the site of a Feb. 17 mudslide that wiped out an entire Philippine village.

Operations were called off after search teams were getting stuck in the mud.

&#8220;This morning, at about 10:50, both the Taiwanese (rescue workers) and a team of Marines with them contacted their operations centers and said seven Taiwanese rescuers had gotten trapped in the mud,&#8221; Parmer said. &#8220;(Philippine) Maj. Gen. Donifacio Ramos, the ground commander here, then ordered the evacuation of all teams from the site.&#8221;

However, at press time, The Associated Press reported that aerial photographs spotted what was believed to be the roof of an elementary school swamped by a massive landslide, and rescue workers will undertake a risky mission to reach it, the provincial governor said Thursday.

Before the rains forced suspension, work was concentrated in an area in which some 240 students and teachers were believed trapped under tons of mud.

The roof was spotted far from what was believed to have been its original site. Rescue workers, who were forced off the disaster zone by heavy rains Thursday, were to try to reach the roof Friday morning after a former resident is brought in to confirm that it came from the school, provincial Gov. Rosette Lerias told a news conference.

Meanwhile, two CH-46E Sea Knight helicopters from the 31st MEU&#8217;s Marine Medium Helicopter Squadron 262 were sent to retrieve all the workers, Parmer said &#8212; but the muck even threatened to bog the first helicopter to arrive.

Parmer said 1st Lt. Rian Iglesias, executive officer of the 31st MEU&#8217;s Weapons Company, 2nd Battalion, 5th Marines, was helping the helicopter crew chief pull out some of the Taiwanese when the helicopter began to sink.

Iglesias reported the helicopter had to take to the air and throw a lifeline to the workers, who were pulled out one by one. From 11 a.m. to noon, &#8220;Those two CH-46 helicopters flew back and forth across the river and brought back 152 personnel,&#8221; Parmer said.

No survivors have been found in the six days since Guinsaugon village disappeared under 30- to 100-feet of mud and boulders. Civilian rescue experts now are working with local authorities to determine when the search phase will end and the site will be considered a recovery effort, a Balikatan &#8217;06 news release stated.

The relief effort included sailors and Marines from ships with the Forward Deployed Amphibious Ready Group, also in Subic Bay for Balikatan &#8217;06. They were joined by the USNS Concord, a Military Sealift Command&#8217;s combat stores ship, which provided a large portion of the supplies.

The confirmed death toll rose to 122 Thursday; officials feared it could surpass 1,000.

Efforts were set back further late Wednesday when a 2-ton rotary drill rig the U.S. military contracted for $7,000 was damaged during delivery. The rig can dig down 60 yards and has a mud pump, according to the news release.

In the meantime, the U.S. Agency for International Development announced it will give $100,000 to the Philippines Red Cross and is airlifting blankets, plastic sheets, water containers and body bags from Miami and Dubai.