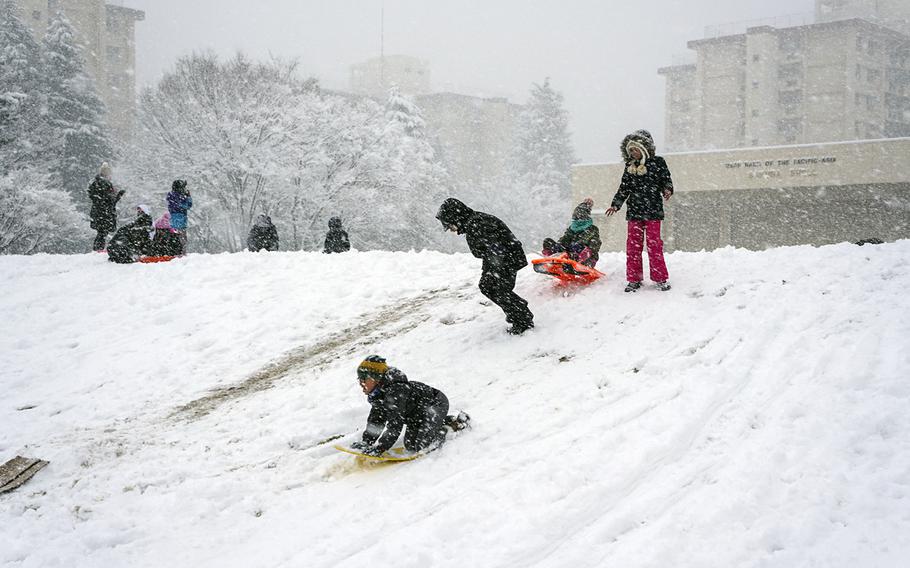 Buy Photo
Children at Yokota Air Base play in the snow, which caused early closures at Camp Zama, Naval Air Facility Atsugi and Yokota on Jan. 22, 2018. (Leon Cook/Stars and Stripes)

YOKOTA AIR BASE, Japan — Some U.S. bases in and around Tokyo closed all but essential operations Monday after the heaviest snowfall in four years slammed the densely populated area around the Japanese capital.

At Camp Zama, the home of U.S. Army Japan in Kanagawa Prefecture, officials announced that normal base operations would cease from 11 a.m. in anticipation of the snowstorm - the first of 2018.

Officials at nearby Naval Air Facility Atsugi announced a 1 p.m. closure for all but mission-essential tasks and personnel.

Significant amounts of snow had already fallen, and children were building snowmen by the time Yokota Air Base, in western Tokyo and home to 5th Air Force and U.S. Forces Japan, announced a 3 p.m. closure.

The announcement covered all 374th Force Support Squadron and Army and Air Force Exchange facilities, except one convenience store scheduled to close at 5 p.m.

By Monday evening more than five inches of snow had fallen on central Tokyo, already surpassing the level of a February 2014 snow. A Yokota weather advisory predicted 7 inches of snow would accumulate on the base by the time the storm passes early Tuesday. The accumulated snowfall was the first at some of the bases since Thanksgiving Day in 2016.

Winter snows are routine and sometimes heavy in northern Japan and the mountains of the main island Honshu but are less frequent and intense in the Kanto Plain around the capital, one of the world’s most densely populated regions and home to thousands of U.S. soldiers, sailors, airmen and Marines.

Japan’s Kyodo news agency said airlines cancelled about 250 flights Monday, many of them to or from Tokyo’s Haneda airport.

Rail service was curtailed and some bullet trains were operating at reduced speeds. The Rainbow Bridge at Tokyo Bay and several expressways in the capital were shut down after numerous collisions due to ice and reduced visibility.