Heat, little rain take the green out of an Aviano summer 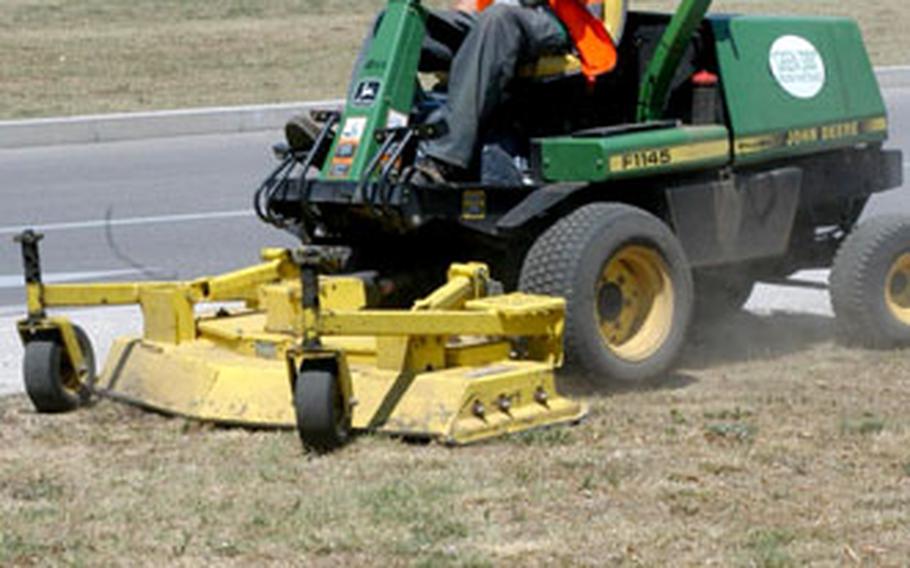 Enrico Leshner mows the lawn Tuesday in front of Aviano’s Building 1472. It didn’t take him too long, because a lack of rain has much of the grass turning brown. (Kent Harris / S&S)

AVIANO AIR BASE, Italy &#8212; In the cornfields that surround the base perimeter, huge sprinklers spray water over the crops, helping to keep them green and vibrant.

Inside the fences, though, where most irrigation comes from clouds, the lawns have largely turned brown.

But the amount of rainfall the base has received is a different story.

Aviano receives about 60 inches of precipitation a year, he said. The total measured this year is around 20 inches. That includes only about one-half inch in July. Even though the fall months are traditionally a lot wetter than July and August, that&#8217;s still behind schedule.

In addition, a problem with one of the base&#8217;s water wells has prompted a water-conservation effort that has essentially limited the irrigation on base to the golf course and athletic fields. And even those areas are receiving the minimum amount needed to keep the grass alive, according to Capt. Jennifer Ferrau of the base&#8217;s public affairs office.

The city of Pordenone, the largest community nearby, has told all its residents &#8212; Italians and Americans alike &#8212; not to water lawns or gardens during three periods during the day. Violators face fines.