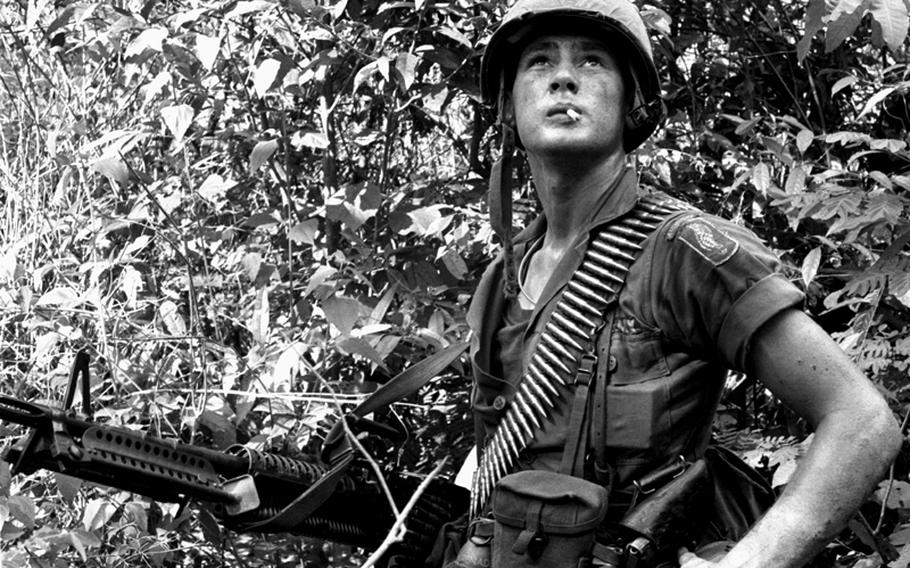 A soldier from the 173 Airborne Brigade checks out the surroundings while on patrol in South Vietnam in May, 1965. (Mike Mealey/Stars and Stripes)

BIEN HOA, Republic of Vietnam — The mission was to search and clear an area of about 13 square miles northeast of Bien Hoa, and, to accomplish this, the largest number of American troops ever to participate in a Vietnam operation had been committed.

They totaled about 2,000, members of the 1st and 2d Battalions of the 173d Airborne Brigade, in the country just about a month but already familiar with the frustrations and hardships of this new kind of war.

They had four days to do the job. They had nearly 60 helicopters, thousands of pounds of ammunition and weapons, and countless years of training among them.

One thousand soldiers were airlifted to the operation area the first day: an artillery battery on the outskirts of the target zone and 750 around troops into the heart of the area, which had long been a Viet Cong stronghold.

The landing, except for the number of men and helicopters, was routine — the armed Hueys shooting rockets while door gunners pounded machine gun fire into the landing zone on the approach. Then the troops were rushing across the rice fields to establish a perimeter.

By the time the fifth wave had brought the last of the soldiers to the area, many others were already deep into the thickly wooded areas heading for the first objective.

Charlie Company was coming down a steep hill, when 60mm mortars began exploding about 35 meters away. There were only a few rounds, and the men, laying flat on the ground under dense brush, escaped unhurt.

Then two rounds of big stuff — possibly artillery — came in.

The men who heard the whistle of the rounds hit the dirt.

Seconds after the shattering explosions, the word came down the line: “Medic! We need a medic up here.”

Within 30 minutes they were headed for a hospital, aboard a helicopter ambulance of the 57th Medical Evacuation Det. Other men were falling victims of the heat, nauseous and dizzy, but the day’s objective and permanent shade were close enough so they could keep going.

Being hit hard by the heat is nothing to feel ashamed of — not when every man’s fatigues are so wet with perspiration that they could be wrung out.

By nightfall, the objectives had been met. There had been no firm contact with the enemy.

Another 1,000 men were landed the next day — this time 4 miles to the east. For the next two days, the 173d would sweep the area, hoping to find the Viet Cong; accomplishing their mission — to clear the area.

The frustrations of this war were now becoming even more clear — days of marching and sweating under the blistering sun or crawling under the scratching brush of the muddy jungles, nights with little sleep and a thousand insects biting you, and always the dwindling water supply and the cold C-rations.

And a vanishing enemy that could strike any minute, making his presence known with deadly machine gun sounds.