Heart of US base expansion effort in Europe gets new commander 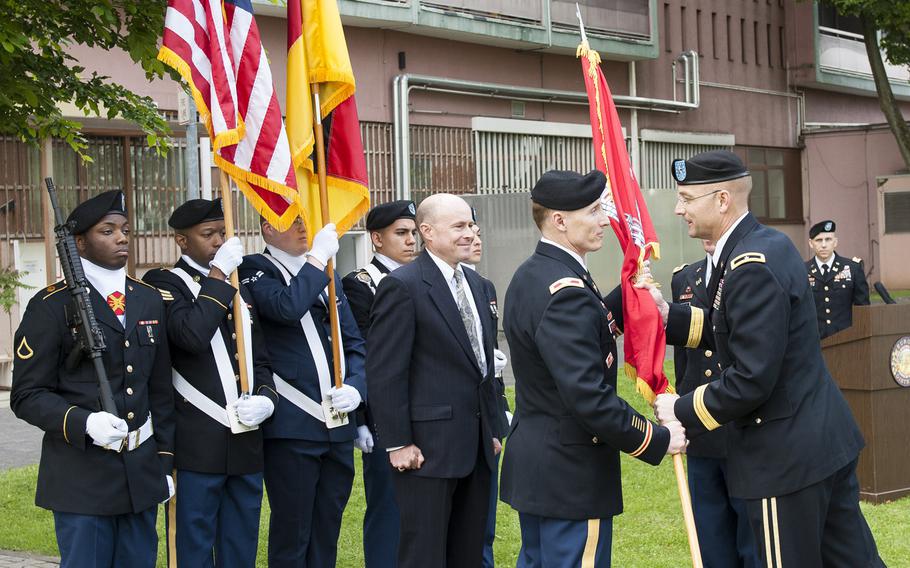 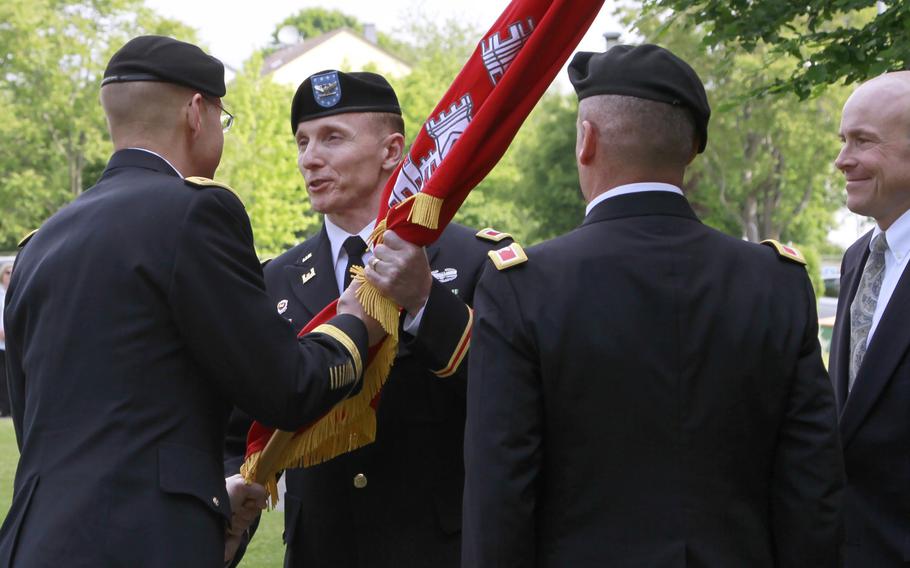 WIESBADEN, Germany — The organization tasked with much of the work involved in building up and expanding logistical and training bases in Europe is under new leadership, as Col. John Baker took command of the U.S. Army Corps of Engineers-Europe District from Col. Matthew Tyler Wednesday in a ceremony in Wiesbaden.

Baker brings a wealth of experience to the position, having previously served as commander of the San Francisco district and deputy commander of the Baltimore district. Most recently, he was chief of staff of USAEUR’s engineering division, a job he says has given him a unique perspective on his new role.

“I have the interesting position, and it’s been very beneficial, in that for the past year I’ve been a customer of the (Europe) Corps of Engineers,” Baker said during the change-of-command ceremony at the Amelia Earhart complex.

“Seeing what the security environment is, seeing what our national security interests are, having my family over here, using the schools and hospitals — we benefit from past projects from the Europe district. I couple that in with my past experiences, which includes command, and I think that has put me in the right frame of mind.”

Baker will be stepping into a command that currently oversees more than 650 projects annually in Europe, Africa and Israel. Projects are now underway in 44 countries and involve about $4 billion in annual spending.

Major efforts are underway for the European Reassurance Initiative, an Aegis ashore ballistic missile defense complex in Poland, new schools in Germany and Belgium, and humanitarian projects in Africa and Europe.

The scope is daunting, but it’s something Baker is looking forward to, pointing to USAREUR generally as a “leadership laboratory” where junior leaders are tasked with important missions.

“I think it makes it even more important to rely on our subordinates,” he said.

“This is an environment and command where our junior leaders really have a chance to rise to their full potential.”

U.S. European Command chief Gen. Curtis Scapparotti, in testimony to Congress this month, signaled the need for more troops — and the facilities to support them — to counter a possible Russian threat and to reassure allies, particularly the Baltic states and Poland. He said improving existing facilities was the command’s “top priority” in coming years, one that will fall heavily on the engineers. Baker thinks it’s something his district will be able to pull off.

“I like studying history and gain perspective from that, and the Europe district and the U.S. Army Corps of Engineers has a history of reliable and responsive support to U.S. national security interests,” he said.

Col. Matthew R. Tyler, who has guided the district over the past three years, was proud of what he and his team accomplished.

“I’ve watched the district ... handle a workload that continues to increase, has greater international reach than ever before, and includes projects that become more and more complex and challenging each and every day,” he said.

“I’m proud to have been part of an organization that had such an active role in improving the quality of life for those who serve within our area of responsibility.”