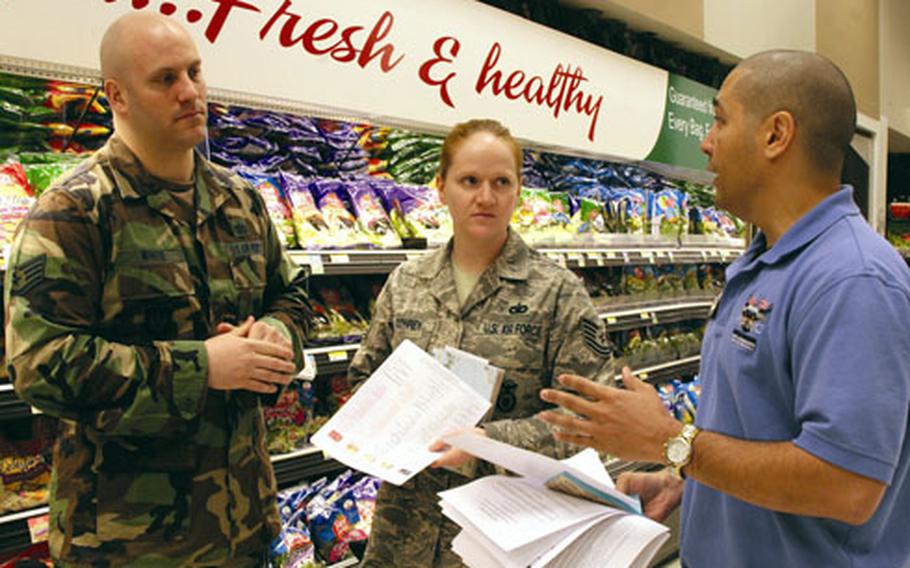 The grocery store can be a den of temptation if you&#8217;re not careful.

But it&#8217;s not just the impulse junk-food buys that can derail people from their good intentions when it comes to grocery shopping.

"You gotta have a game plan," explained Tech. Sgt. Michael DeCarmo during a recent tour of the commissary for airmen looking to improve their eating habits.

Making a grocery list and eating before you go food shopping can make all the difference, said DeCarmo, with the Health and Wellness Center at RAF Lakenheath.

For newlyweds Stacie Conrey and Michael White, both noncommissioned officers with the 48th Security Forces Squadron at Lakenheath, marriage has considerably changed the way they eat.

"We just want to get a better lifestyle going," said Conrey.

Now that she&#8217;s cooking more and more often for her husband &#8212; who eats about twice as much as she does &#8212; Conrey&#8217;s biggest problem is portion control. Since consulting a base dietician last month, Conrey and White have learned to leave the dinner table satisfied, but not stuffed.

"It&#8217;s knowing you can eat more but not doing it," said White, who has been focused on his diet since having foot surgery recently.

"Since I can&#8217;t exercise, diet is the only thing I can use to control my weight," said White, who has had considerable experience manipulating his weight to meet Air Force physical fitness standards.

A few years ago he lost 40 pounds in one month on the Atkins Diet, which sent Americans on a carbohydrate-cutting craze before the next fad diet emerged.

White admits he was in a pinch and had to drop the pounds fast. But he said he is now determined to make healthy eating part of his lifestyle and will never crash-diet again.

"We want to do it the right way, the healthy way," Conrey said.

The Health and Wellness Centers at RAFs Lakenheath and Mildenhall have hosted a series of activities throughout March as part of National Nutrition Month. A healthy-cooking demonstration Thursday at Lakenheath will conclude the campaign.

For more healthy eating tips or information about upcoming nutrition classes, contact the Health and Wellness Centers at 226-2710 (Lakenheath) or 238-7161 (Mildenhall.)

Staff Sgt. Michael White and Tech. Sgt. Stacie Conrey get healthy eating tips while touring the commissary at RAF Lakenheath with Tech. Sgt. Michael DeCarmo from the base&#8217;s Health and Wellness Center. "You gotta have a game plan," DeCarmo said.