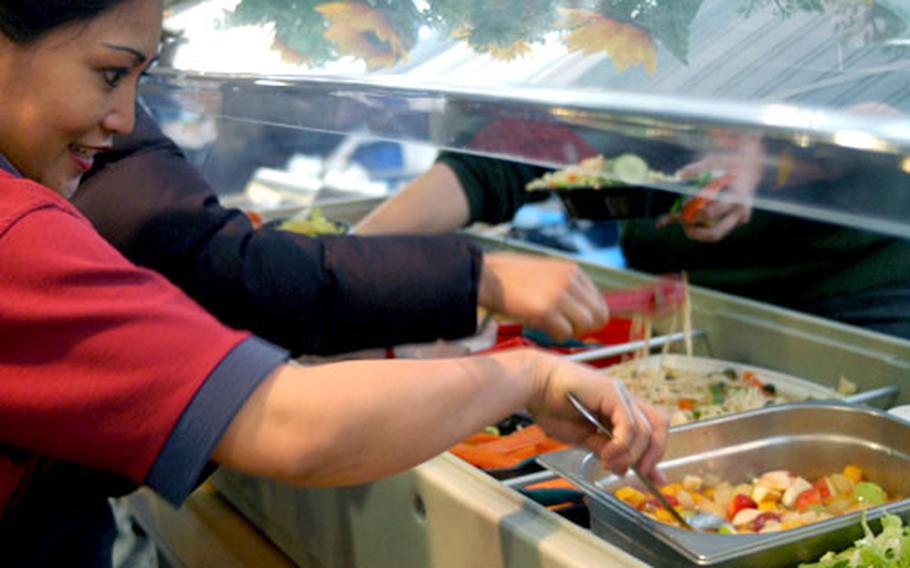 Lakenheath’s “salad lady” Naneth Melcher keeps watch over her beloved salad bar, which she spends each lunch keeping stocked and tidy as students and teachers move through for some greenery. (Ben Murray / S&S)

Lakenheath’s “salad lady” Naneth Melcher keeps watch over her beloved salad bar, which she spends each lunch keeping stocked and tidy as students and teachers move through for some greenery. (Ben Murray / S&S) Considering the growing concern over childhood obesity among American kids, many of the menu items at on-base schools can seem suspect.

Cheeseburgers, chicken nachos, potato wedges and french fries can all be bought at a high school cafeteria on a given day, often in lieu of the salad bar, the deli counter or the lonely fruit cup.

But are the greasy-sounding menu items as bad for kids as they may initially appear? Officials from the Army and Air Force Exchange Services, which cooks and serves school lunches in the United Kingdom and across Europe, say, in many cases, no. Chicken nachos and potato wedges, for instance, are part of one of the U.S. Department of Agriculture&#8217;s guaranteed-to-be-nutritious school lunches.

But do kids really prefer a healthy, baked corn dog over a sizzling stack of chicken tenders with fries? The answer, for teenagers, would appear to be a big fat no.

Once a student gets into high school &#8212; and often is granted the option to leave campus for lunch &#8212; participation in the school lunch program falls off the map. Only 18 percent of Lakenheath students (where only 10th-12th-grade students can leave) eat what is called the patterned &#8212; or USDA-approved &#8212; meal. And, a rock-bottom 11 percent at Alconbury High School get in line for it daily.

So what are most older students eating for lunch? The one thing they can&#8217;t get at school, teens said: cheap junk food.

Lamothe and a gaggle of other sophomores showed off their lunch choices: a bowl of ice cream for one, a slice of pizza for another, a chili dog, chicken wings, a bag of chips and a Coke. The seniors, because they have cars, weren&#8217;t around because they were likely at the drive-through at Burger King or Taco Bell.

Others frequent the local shoppette, the girls said. For what?

There&#8217;s very little junk food to be had at Lakenheath&#8217;s campus. Vending machines selling sodas and potato chips have long since been removed.

Randy Cole, AAFES food business manager in England, said that&#8217;s the basic reason for offering the a la carte options: Older students have the freedom, means and metabolism to eat a Whopper a day, so why not try to provide that at school?

At smaller, remote schools such as Menwith Hill and London Central, which don&#8217;t have on-post fast food chains, lunch program participation rises back nearly 50 percent, according to school and AAFES information.

And despite the universal chalupa-loving ways of high school students, AAFES food programs at many levels are making a turn toward the healthy.

At Feltwell Elementary School, for example, lunch options have become more nutritious, said cafeteria supervisor Will Brown. Following an initiative driven by local parents, the Doritos and candy next to the lunch counter cash register were replaced by fruit cups, bananas, juice boxes and water, he said. There&#8217;s even a mini salad bar now &#8212; though kids don&#8217;t use it much.

Just two years ago, kids could still buy candy bars and potato chips at the lunch counter, and some youngsters were spending their entire fistful of lunch money on them regularly, Brown said.

The future of school lunches at U.K. schools will likely be determined in a similar way, Cole said. Parents will go to school liaison officers, or appeal to principals or base commanders.

You are what you eatWhen the lunch bell rings, what does a child&#8217;s daily lunch money buy? About 3.6 calories per penny, if they&#8217;re eating a school lunch, and a gram of fat for every 10 cents. But for older students, four bucks can buy a day&#8217;s worth of saturated fat at a fast-food joint, and a chef salad at the cafeteria costs more than a pizza slice, a bowl of chili and a cheeseburger combined. Here&#8217;s a sample of the nutritional value and cost of some lunch room and off-campus favorites:

Slice of cheese pizza, side salad with fat-free ranch dressing and a milk: