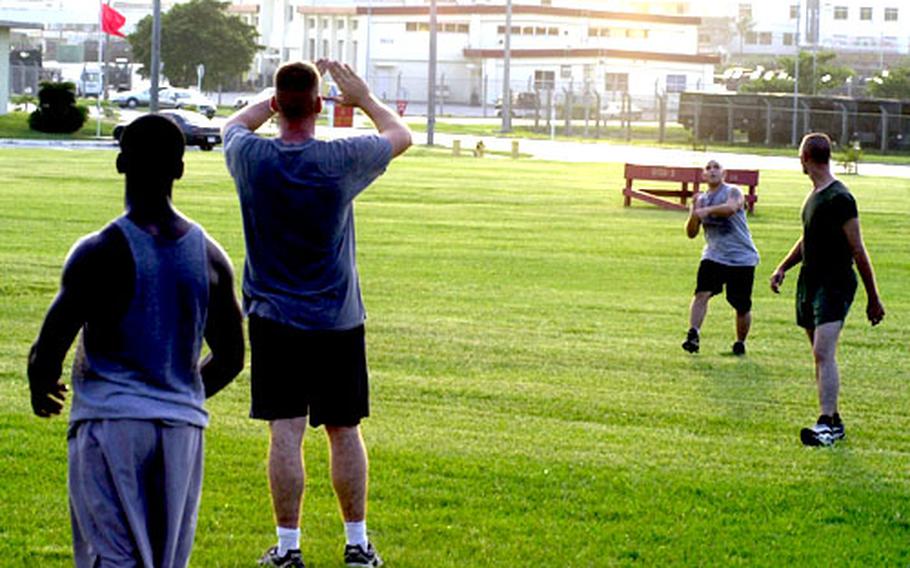 Marines from the Engineer Maintenance Company of 3rd Materiel Readiness Battalion on Okinawa practice just after 6 p.m. Friday for an upcoming Commander’s Cup football tournament. The Marines beat the heat by practicing in the evening when it’s cooler. (Fred Zimmerman / S&S)

CAMP LESTER, Okinawa &#8212; While the high summer temperatures may be perfect for Okinawa beachgoers, the heat coupled with high humidity can be a danger for those who are trying to stay in shape.

So far this year, there have been a total of nine heat-related injuries reported, either heat exhaustion or heat stroke, according to U.S. Naval Hospital Okinawa&#8217;s preventive medicine department.

Heat cramps are the least severe form of heat injury, according to Navy Capt. David Lasseter, director of medical services at the hospital. He said cramps occur when an individual is dehydrated and loses electrolytes from the bloodstream. Once cramps have started, Lasseter said all activity should stop and the individual should seek shade and drink liquids.

Typical signs of heat exhaustion include weakness, anxiety, fatigue, dizziness, headache, poor appetite, nausea and even vomiting. When heat exhaustion occurs, Lasseter said the individual should seek medical care because they may require intravenous fluids to replenish their system.

The most severe heat injury is heat stroke. Lasseter said prior to suffering from heat stroke an individual may experience many of the same symptoms of exhaustion, but there is one tell-tale sign.

There is one precaution everyone should observe to prevent heat injuries: drink plenty of fluids, Lasseter said.

While staying hydrated is important, Dave Elger, the head of the hospital&#8217;s health promotions department, said if an individual&#8217;s body isn&#8217;t prepared for the climate, heat injuries can still occur.

Elger recommends people in Okinawa engaging in daily exercise do so in the morning before 8 a.m., or in the evening when temperatures cool down.

To help make sure dehydration doesn&#8217;t occur, Elger said, people can weigh themselves before and after workouts. Most will see a loss of water weight, which can help determine how much fluid they need to consume.

While water works, Elger said a sports drink should be consumed if exercising goes an hour or more. He said these beverages help replace electrolytes that water doesn&#8217;t replenish.

Also, Elger said those on fad diets, taking nutritional supplements or certain medications, or recovering from hangovers or illness are at a higher risk because their bodies are already stressed. He said individuals who have already suffered from one heat injury are at a greater risk to suffer another.

Elger said a good rule for staying safe during Okinawa&#8217;s summer heat is not to expect to exercise quite as much. For example, he said, &#8220;You can&#8217;t run at the same interval and distance as you do in the winter months.&#8221;

A good way to judge when and how much training an individual should undertake is the heat flag system on the Marine camps and at other U.S. facilities, Elger noted. The colored flags &#8212; green, yellow, red and black &#8212; are flown to signify the heat condition. Green equates to a thumbs-up for exercise; black means exercise should be curtailed or postponed.

Green Flag&#8212; 80 to 84.9 degrees: Heavy exercise, for unacclimatized personnel, will be conducted with caution and under constant supervision.

Yellow Flag&#8212; 85 to 87.9 degrees: Strenuous exercises, such as marching at standard cadence, will be curtailed for unacclimatized troops in their first three weeks. Avoid outdoor classes in the sun.

Black Flag&#8212; 90 degrees Fahrenheit and above: All nonessential physical activity will be halted for all units.