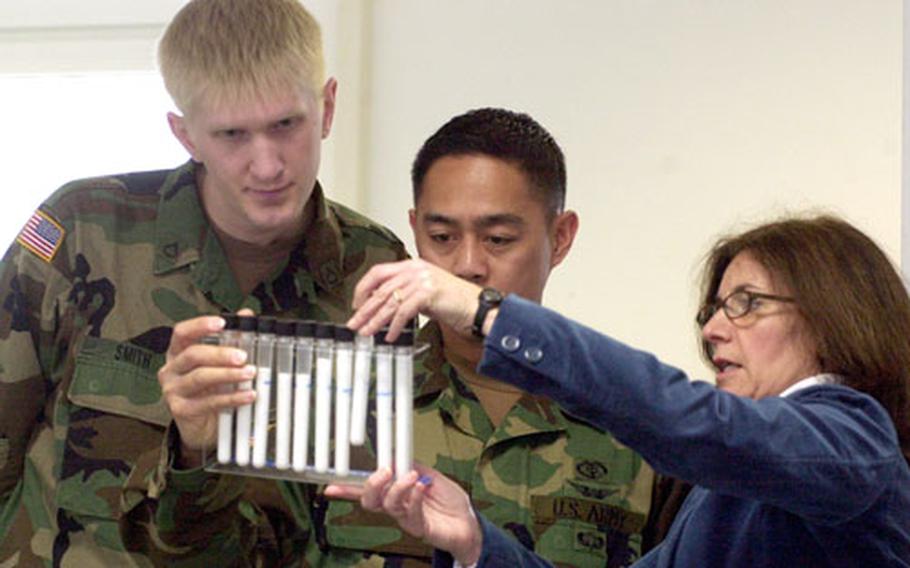 Pfc. Steven Smith, left, and Staff Sgt. Dennis Ladrillono check out the sugar-content display at Baumholder’s first Women’s Health Fair. Most people say “Gross!” when they see how much fat or sugar is in processed foods such as potato chips and soft drinks, said Cathy Douglas, right. (Terry Boyd / S&S)

Hold the body fat analyzer with arms extended and palms over the little silver sensors of the two-handled instrument. Select your height, weight, age and sex and the gadget reveals how much of your body is composed of fat, as well as whether your fat ratio is good, normal or bad.

Women coming into the community are often overwhelmed, said Donna Mundt, a clinical nurse at Baumholder&#8217;s clinic. So the health fair was a chance to reach those who may not be familiar with all the medical services to evaluate their health needs and what&#8217;s available, Mundt said.

A lot was available at the fair, from flu shots and family planning appointments for Baumholder-based women to drawings for free massages, veggie snacks to free prophylactics, Mundt said. There were booths on seemingly every topic, from depression and occupational health issues to exercises and hormone replacement therapy.

Some were fun, some were kind of eye-opening, attendees said.

Carie Hockman, a teacher at Smith Elementary School who is pregnant and an asthma sufferer, said that until she stopped at Jamie MacKenzie&#8217;s booth she didn&#8217;t know how many chemicals, such as institutional cleaners, can be potential hazards.

Even health-care workers don&#8217;t realize that some of the chemicals they work with, such as anesthetic gases, can pose problems during pregnancy, said MacKenzie, who was handing out materials on reproductive hazards for the U.S. Army Center for Health Promotion and Preventive Medicine.

And in that cola? Two full test tubes of sugar, she said, to gasps from an onlooker.