Health care, bonuses convince some GIs in Iraq to re-enlist 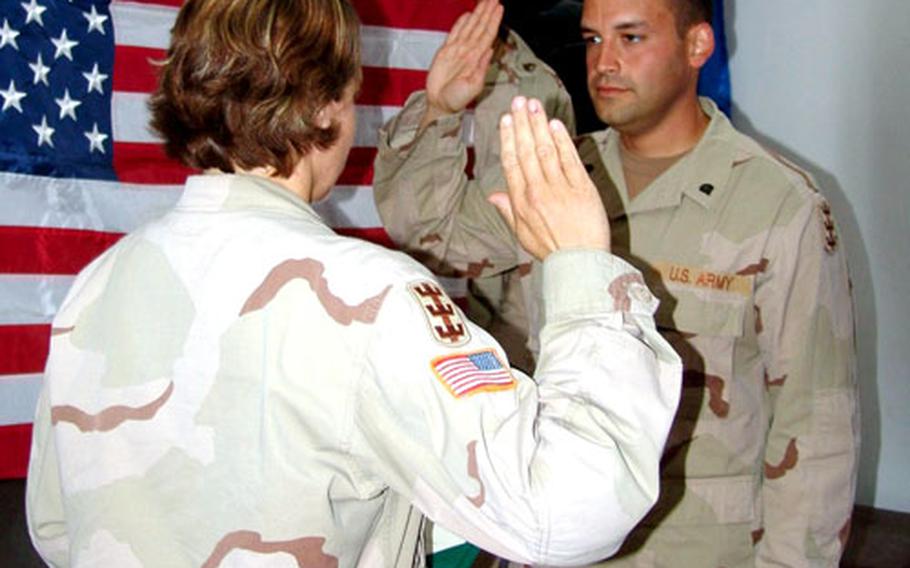 MOSUL, Iraq &#8212; Through the first seven months of his unit&#8217;s Iraq deployment, Spc. Richard McCauley knew that he was absolutely-without-a-doubt-no-question-in-his-mind getting out of the Army when his enlistment ended in 2007.

He made fun of friends who re-enlisted, calling them crazy.

McCauley, from the Germany-based 94th Engineer Combat Battalion (Heavy), was positive that he was done with the Army and ready for the civilian world, almost right up to the day &#8212; Wednesday &#8212; when he extended through 2009.

Even though he had two years remaining on his first enlistment, McCauley said that concerns about his daughter&#8217;s health and his financial situation were weighing heavily on his mind.

For some soldiers, the tax-free bonus is just what&#8217;s needed to sway them to sign up again. But for others, it is only part of the package, said Sgt. 1st Class Craig Gransbery, the battalion&#8217;s career counselor.

Gransbery has re-enlisted 88 soldiers since March 1 and given out $822,000 in tax-free bonuses. With three more re-enlistments scheduled for Friday, Gransbery was to meet his objectives for the number of re-enlistments the battalion had hoped to have by the end of fiscal 2005.

Many of the soldiers re-enlist for certain guaranteed options, such as being stationed at the base of their choice or to change career fields, Gransbery said.

Sgt. William Hunnicutt, also from 94th Engineers, got a Hungry Man portion of gravy. He received a $22,500 bonus for a four-year re-enlistment.

Hunnicutt agreed to re-enlist only if he could go to airborne school. He eventually wants to become a medic and go into the Special Forces. He plans to be a career soldier, unless things don&#8217;t work out with changing career fields, he said.

Other soldiers in the battalion won&#8217;t be swayed by the bonus, however.

That&#8217;s the case with Spc. Charles Knouse. When his enlistment ends in November 2006, he will put away his combat boots for good.

And deploy he did. He joined the 94th Engineers in Iraq for the last couple of months of Operation Iraqi Freedom I, and came back for all of this deployment with the unit.

There are other soldiers in Knouse&#8217;s boat, and many others who are undecided, Gransbery said. He said when he talks to the soldiers who are sitting on the fence, he tells them to wait out the Army&#8217;s current high deployment tempo.