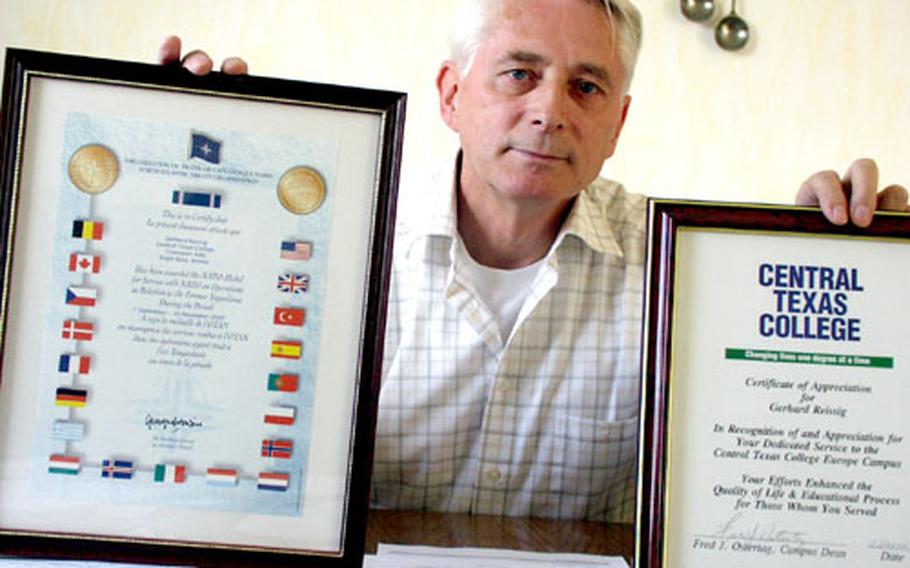 Gerhard Reissig is accusing Central Texas College of age discrimination, and has filed a lawsuit in federal district court in Texas requesting back pay and other compensation. (Kevin Dougherty / S&S)

Over the first four years of employment, the college routinely gave Reissig high marks, according to annual CTC evaluations the Army veteran provided to Stars and Stripes.

Students also seemed to appreciate Reissig, based on a review of dozens of questionnaires about him and the 30-hour introductory course to German culture he taught.

These days Reissig has a sinking feeling the college is out to get him.

What originally began as a dispute over hourly wages has escalated into a legal battle pitting the 56-year-old veteran against Central Texas College, in particular, its European Campus, headquartered in Hanau. Fred J. Ostertag, the dean, heads the European operation.

Reissig has filed a federal lawsuit against the institution alleging age discrimination, claiming preferential treatment was given to younger teachers at his expense. Reissig said officials cut his hourly salary when they reversed a previous decision to pay him more for prior teaching experience. When he complained, he maintains, the college retaliated, taking steps that ultimately cost him the logistical support he received from the college, including his Department of Defense ID card.

In a phone interview, Ostertag rejected the notion he or anyone affiliated with the college is out to get Reissig. Ostertag pointed out that Reissig &#8220;is still working for us&#8221; as one of four Headstart instructors in Hanau.

CTC is one of five institutions contracted by the Army to provide adult education.

It provides an array of educational opportunities, from high school equivalency work to various vocational and technical courses to the FAST program, which aims to improve reading, math and communication skills. There are liberal arts classes, foreign language courses and the Headstart program.

A couple of years ago, Reissig said, CTC began using more Headstart teachers for the Hanau area than it needed. His objection to the surplus coupled with a cut in his pay triggered a series of events that left Reissig without logistical support.

Furthermore, Reissig maintains Ostertag and his staff aren&#8217;t allowing him to use vacation or sick time he accrued while working full time for CTC in the Balkans.

Ostertag declined to comment on the lawsuit, referring all questions to attorneys in the States. Both sides are currently hashing out pretrail matters, such as where and how depositions are to be taken.

&#8220;The college denies any wrongdoing whatsoever,&#8221; said Elizabeth Marsh, an attorney with a Texas-based law firm that is representing the college.

Marsh also rejects Reissig&#8217;s claim for compensation, such as back pay.