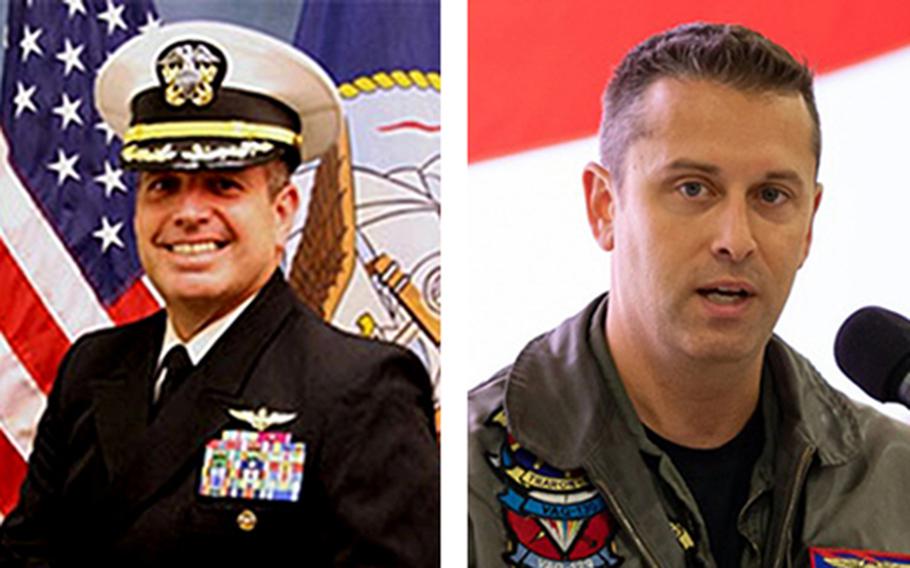 Two seasoned Naval aviators were killed in a civilian plane crash in Alabama this week while heading back to Pensacola, Fla., where they were both based.

Capt. Vincent Segars and Cmdr. Joshua Fuller were traveling from Jasper, Ala., when their Piper PA-32 crashed near an airfield outside Selma, local authorities said Thursday.

The plane, owned by Fuller, went down just before 5 p.m. Wednesday after the pilot radioed for an emergency landing, the Selma Times-Journal reported. Dallas County District Attorney Michael Jackson said Segars and Fuller were the only two people on board the plane, the newspaper said.

“I am overcome with grief!!!” said Baron Reinhold, a retired Navy aviator, in a Facebook post on Thursday after he said he was notified of Segars’ death. “My retirement speaker, dearest friend, and the best naval officer that I’ve ever known … was lost in a plane crash yesterday evening.”

Before taking command in Pensacola, Segars served as the Navy’s top officer and enlisted community manager. Over his 30-year career, he flew with or served in leadership and staff roles at maritime patrol and reconnaissance units in Rota, Spain, Whidbey Island, Wash., Misawa, Japan and Kaneohe Bay, Hawaii, a Navy biography states.

He clocked more than 4,300 flight hours and his awards and decorations include the Defense Superior Service Medal, two Legion of Merit awards, the Bronze Star, three Meritorious Service Medals and an Air Medal for individual action and four for strike flights.

“Everyone that knew Vince respected him,” Reinhold’s post said. “He was a man of conviction and lived with a sense of purpose. He loved his Savior with all of his heart and it brought him joy to ‘live a life according to the calling [he had] received.’”

Fuller, a native of Orlando, Fla., earned his gold aviator wings in 2001 and had logged more than 2,100 flight hours, including 360 carrier landings, the Navy said in a statement last November when he relinquished command of Naval Air Station Pensacola’s Training Squadron 86. He had orders to report to Naval Aviation Schools Command.

“This was by far the most rewarding tour of my career,” he was quoted as saying at the time. “As I make my final approach toward the end of my career, I am honored to have helped shape the future of Naval Aviation and that’s something I will treasure.”

He previously served with several electronic attack and strike fighter squadrons and deployed with Carrier Air Wing 3 as the electronic warfare officer in 2010, the Navy said. He also served with the Joint Staff overseeing planning for Pacific and Northern commands.

The Navy confirmed the deaths of two personnel assigned to the Florida base, but did not identify them, Pensacola’s WKRG News 5 reported. NAS Pensacola did not immediately respond to a Stars and Stripes inquiry.

The National Transportation Safety Board is investigating the crash, but is not traveling to the scene of the accident, it said Thursday on Twitter.

The deaths come six months after three sailors assigned to the schools command were gunned down at NAS Pensacola on Dec. 6 by a Saudi student who authorities have said had ties to al-Qaida’s Yemen branch.