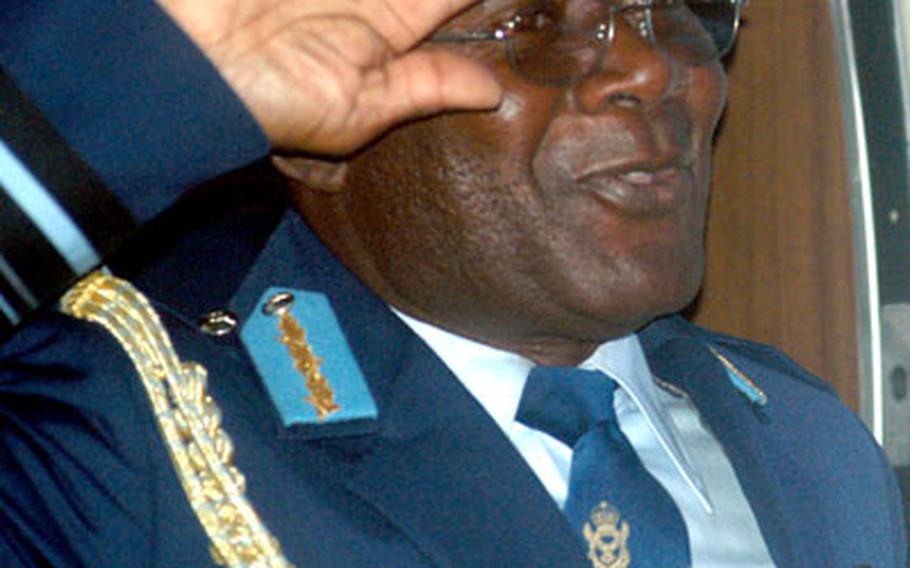 Air Vice Marshal Edward Apau Mantey, head of the air force in Ghana, salutes Wednesday after returning to RAF Mildenhall, England, from a trip to Ramstein Air Base, Germany. The vice marshal is a guest of 3rd Air Force for the week. (Ron Jensen / S&S)

RAF MILDENHALL, England &#8212; The head of Ghana&#8217;s air force said his west African country would help America any way it can in the war on terrorism.

Air Vice Marshal Edward Apau Mantey, who has been in England since Monday visiting various units at RAF Mildenhall and RAF Lakenheath, said the two countries are friends and should cooperate against an enemy that threatens the entire world.

&#8220;We have common interests. We now live in a world of terrorism that knows no boundaries,&#8221; Mantey said in an interview Wednesday evening. &#8220;It is good to make yourself available. We shall open our arms and give [America] the assistance that we can give.&#8221;

Mantey made his comments after returning from a visit to Ramstein Air Base, Germany, with Maj. Gen. Michael C. Gould, commander of 3rd Air Force, which has its headquarters at RAF Mildenhall. Mantey is in England at Gould&#8217;s invitation.

Mantey&#8217;s air force could help mainly by opening its bases to American aircraft. His service is small &#8212; &#8220;a couple transport planes, a couple helicopters,&#8221; is how Mantey described it. He declined to provide the number of personnel in the air force.

But Gould said the offer is genuine and could be beneficial as America pursues terrorism wherever the fight takes it.

A focus of 3rd Air Force is sub-Saharan Africa, and Gould visits the continent regularly to forge relationships with military and political leaders. An upcoming trip in March will take him as far as South Africa, among other stops.

Mantey, 58, has been shown nearly every nook and cranny of the Air Force mission in England. On Tuesday, he was aboard a C-130 belonging to the 352nd Special Operations Group when it was refueled by a KC-135 from the 100th Air Refueling Wing.

Gould said the U.S. Air Force has already done some training with airmen from Ghana. There is opportunity for further training in maintenance, scheduling issues, flight safety and the development of a senior noncommissioned officer corps.