HDTV coming to all AFN channels by end of 2017, official says 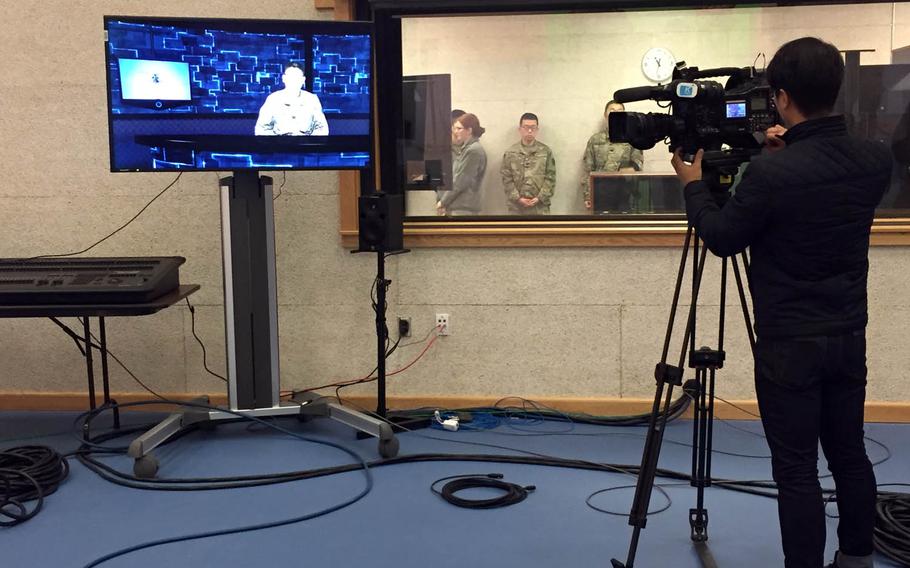 Buy Photo
A cameraman shoots video at the new headquarters for American Forces Network Pacific Korea at Camp Humphreys, South Korea, Tuesday, Nov. 15, 2016. AFN will provide high-definition television for all channels by the end of next year, a senior official told Stars and Stripes. (Kim Gamel/Stars and Stripes)

CAMP HUMPHREYS, South Korea – American Forces Network will provide high-definition television for all of its channels by the end of next year, a senior official told Stars and Stripes on Tuesday.

Air Force Col. David Honchul, director of AFN’s parent organization the American Forces Radio and Television Service, said the main stumbling block has been cleared after a contract was awarded to upgrade the satellite-delivery service.

“We finally have the contract let. We have that in the works. In the next year, in 2017, I can actually say … we’re gonna have high definition for all channels,” he said in an interview at the grand opening of the new headquarters for AFN Pacific Korea at Camp Humphreys.

Delays in implementing HDTV have been a sore spot for many overseas viewers who bought pricey decoders to accommodate the improved picture. AFN originally planned to upgrade its satellite television signal in 2014, but it was held up because of contract issues.

The contract is with DigitalGlue, a systems integration and technology provider, officials said later.

Plans to offer cloud-based internet video streaming and video-on-demand services are still in the works but not imminent, Honchul said.

“My first effort, which is a stepping stone to all the rest, is bringing high-definition television,” he said. “Currently we only have one high-def channel, and all the rest are standard definition.”

Viewers who have old decoder boxes will still be able to watch TV — it just won’t be in HD, he said, stressing not everybody will need a new box and officials are working to ensure a smooth transition.

“We’ll make sure that people are going to understand exactly where they stand so that they understand how they can get the best product that we’re trying to provide for them.”

Honchul said efforts also were underway to improve the decoder boxes so they may be able to accommodate video on demand and other services in the future.

“Another thing about the new decoder box that I think will be very exciting is that it will have a DVR capability, which seems so basic to a lot of people but it hasn’t existed out here yet,” he added.