HC-4 takes its Black Stallions from Sigonella to Norfolk 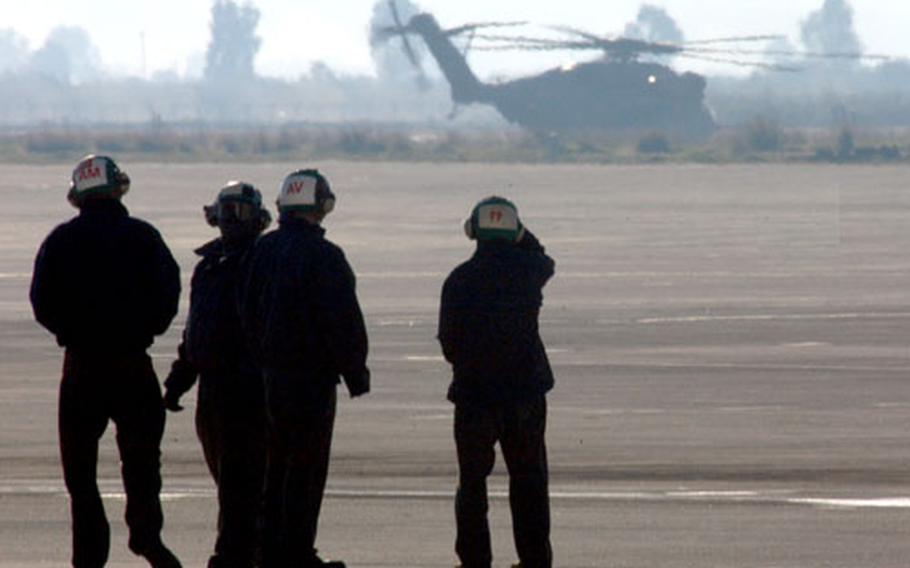 Aviation crewmembers look off into the distance as an MH-53E Sea Stallion from Helicopter Combat Support Squadron Four (HC-4) takes off from Naval Air Station Sigonella, Sicily, on Saturday. HC-4, which had been based at Sigonella since 1983, is moving to Norfolk, Va. (Courtesy of U.S. Navy)

The Black Stallions of Naval Air Station Sigonella, Sicily, have officially headed to a new pasture.

They started their move Saturday, with four of the squadron&#8217;s aircraft leaving for a seven- month deployment to the Middle East, according to a Navy news release. But, according to the release, squadron aircraft and personnel will still make deployments to Sigonella from Norfolk.

The squadron, which according to its official history was the first and only dedicated CH-53E squadron in the Navy, had been based at Sigonella since Aug. 25, 1983.

Squadron personnel have been preparing for the move since July, when sailors receiving orders to the squadron began reporting to Norfolk instead of Sigonella.

At its total strength, the squadron had more than 35 officers and 240 enlisted personnel. During its final few months in Sigonella the numbers dwindled down, but a small detachment will remain through September.

Squadron aircraft have taken part in every major military operation and exercise in Europe, according to the release. It has also flown a number of high-profile passengers, including Vice President Dick Cheney and then-Israeli Prime Minister Benjamin Netanyahu.

While the squadron focuses on its successes, it is leaving Sigonella after having three major accidents in the past three years, including a July 2003 accident in which four sailors died. Eight other sailors were injured in February 2005 and August 2004 accidents.