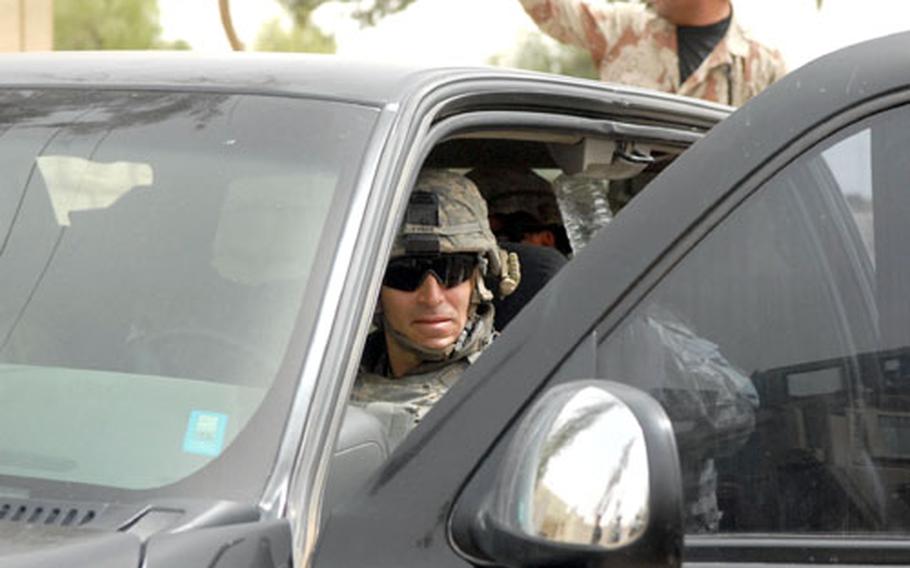 Lt. Col. Chris Vanek gets ready to drive an unarmored pickup into Hawijah’s market Tuesday at the invitation of Col. Khalaf Ibrahim Ali. Vanek’s spin in the pickup would have been unthinkable until recently. But stability has improved considerably since the Americans removed concrete walls and concertina wire from the city, despite some worries that their removal would just make a bad situation worse. (James Warden / S&S)

Lt. Col. Chris Vanek gets ready to drive an unarmored pickup into Hawijah’s market Tuesday at the invitation of Col. Khalaf Ibrahim Ali. Vanek’s spin in the pickup would have been unthinkable until recently. But stability has improved considerably since the Americans removed concrete walls and concertina wire from the city, despite some worries that their removal would just make a bad situation worse. (James Warden / S&S) 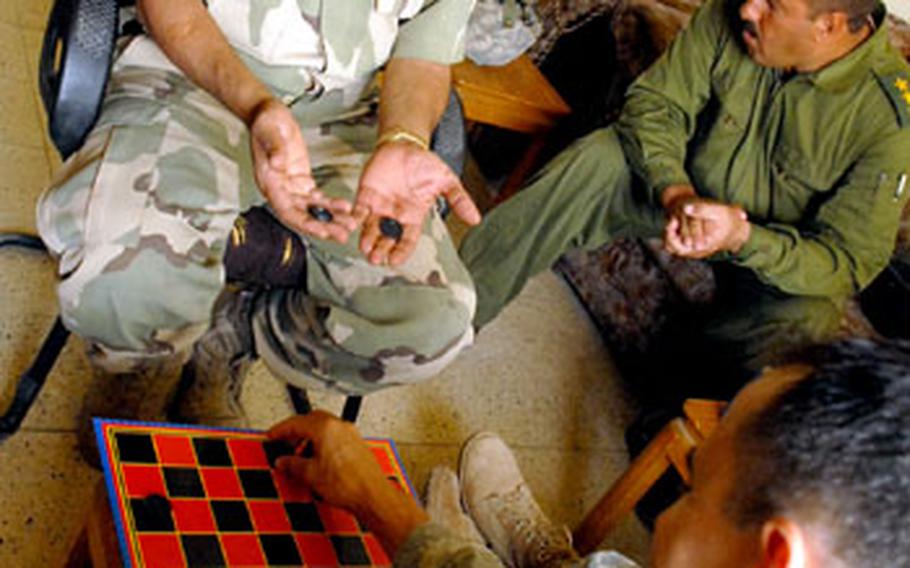 Col. Khalaf Ibrahim Ali, a “Sons of Iraq” leader in Hawijah, Iraq, looks at two checkers he captured from Lt. Col. Chris Vanek – commander of 1st Battalion, 87th Infantry – while Vanek was teaching him how to play checkers Tuesday. Vanek’s predecessor hoped to make the area safe enough to play soccer at local field, but was never able to. Since 1/87 has already met that goal, Vanek wanted to go a step further by playing checkers with Ali in the city. (James Warden / S&S)

HAWIJAH, Iraq &#8212; Iraqi Army leaders can be forgiven if they wondered what the Americans were thinking when they began tearing down all the walls and barriers here earlier this year.

The city was just emerging from a violent past as an insurgent haven. Not long before, militants attacked American soldiers more than once a day on average, and shot rockets and mortars at their bases every three days. Walls were the favored solutions to such problems across Iraq.

Yet 1st Battalion, 87th Infantry decided to buck that trend and try to bring a bit of normalcy to the area, an unconventional decision that hasn&#8217;t slowed Hawijah&#8217;s impressive security gains.

Americans have built miles of concrete blast walls throughout Iraq, hoping to control fighters moving in and out of the cities. Baghdad itself is a warren of cement T-walls that separate Sunni and Shiite neighborhoods. The walls funnel traffic through checkpoints so soldiers, police and security volunteers can more easily spot vehicles carrying bombs and other weapons.

Vanek&#8217;s decision to go against that tactic wasn&#8217;t especially popular in the beginning. Iraqi Army leaders, in fact, wanted to do the exact opposite. They suggested building a cement wall around Hawijah to contain it the way the Shiite slum of Sadr City is isolated from the rest of Baghdad.

But Hawijah residents hated the walls. Essa Egaal, who works for the mayor, said the walls and barricades caused traffic accidents and congestion. Iraqi Police officer Yaser Mohsen Abbas said driving to the market could be miserable.

"It&#8217;s the least attractive [option] for an individual to be stuck in traffic," he said.

Vanek described a town with barricaded side streets and concertina wire strewn along the ground.

The Americans had seen growing improvement in the area and wanted to restore a sense of normalcy, so they decided to go ahead with the plan. Residents were overjoyed when they arrived to tear down the walls. Command Sgt. Maj. Robert Wilson recalled that many civilians pitched in to help when they saw the Americans removing the obstacles.

Despite worries about what would happen, the area&#8217;s security improvements continued. Both roadside bomb and rocket and mortar attacks are down about 90 percent from when the unit arrived. It&#8217;s impossible to say how much the unit&#8217;s other initiatives played a part in that success, but Vanek is certain that removing the walls was critical.

Just as importantly, Hawijah is at last looking like a city. People mill about the downtown market without worry. Children scamper around the shops. And cars pass through as easily as can be expected in a bustling city center.

"It&#8217;s very important because you feel like you&#8217;re a civilized city," said Hussein Mubarak, who runs the mayor&#8217;s security detail. "The city should always look good because it reflects on the individual character of its citizens."