Hawijah drivers will no longer have to move aside for U.S. convoys 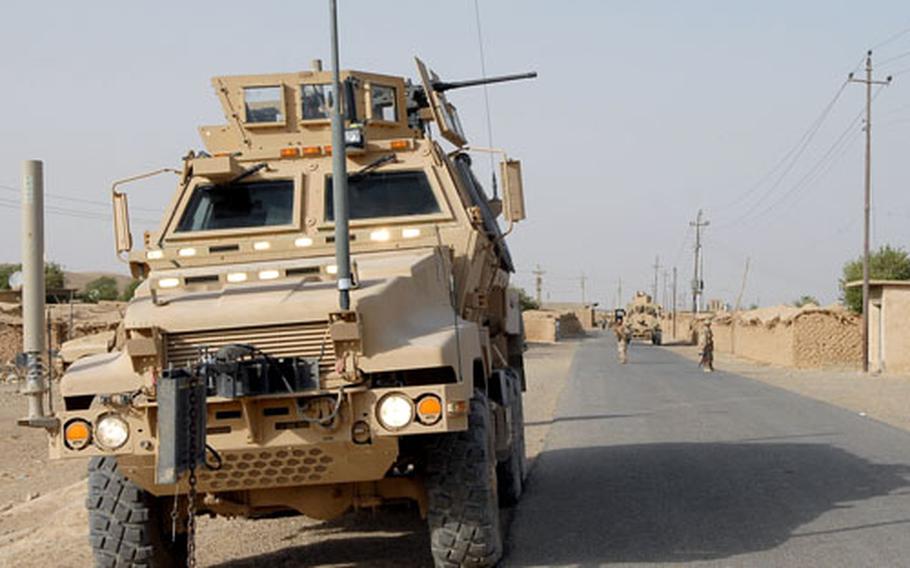 A Mine Resistant Ambush Protected vehicle guards a soccer field Thursday during a match between American soldiers and Iraqis in Sabagiya, Iraq. The oversized vehicle will soon share the road with local drivers. (James Warden / S&S)

A Mine Resistant Ambush Protected vehicle guards a soccer field Thursday during a match between American soldiers and Iraqis in Sabagiya, Iraq. The oversized vehicle will soon share the road with local drivers. (James Warden / S&S) 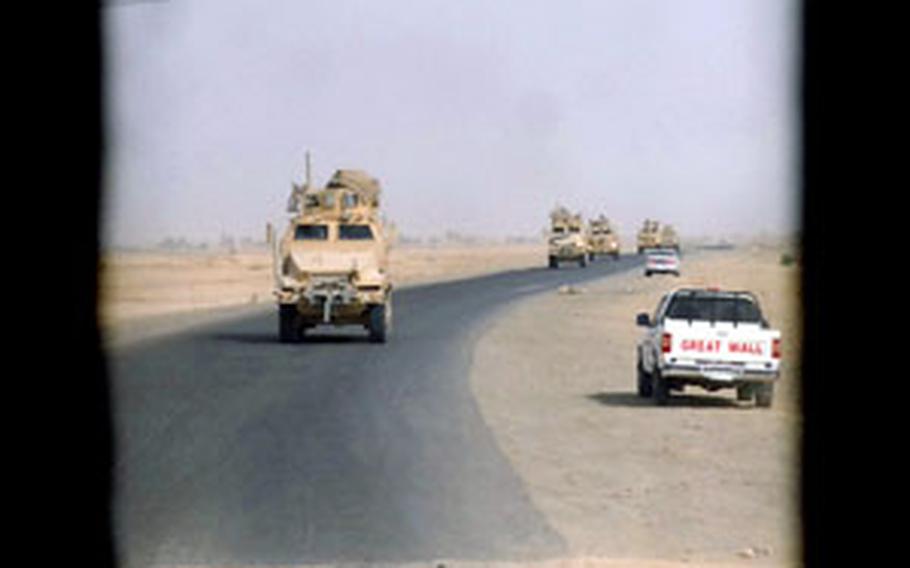 The view out the back window of an MRAP shows a common sight Thursday near Zaab, Iraq: A local driver stopped for a passing American convoy. (James Warden / S&S)

HAWIJAH, Iraq &#8212; U.S. leaders will soon begin notifying Iraqi drivers in this area that they no longer must make way for military vehicles, a step that is welcomed by residents and another sign that dangers have eased.

American convoys will start sharing the road with local drivers starting Monday, similar to the way they do in the United States, Germany and other peaceful nations. The change is one more step toward normalcy in this area, south of Kirkuk, that was once one of the country&#8217;s worst.

Americans have been forcing Iraqis to the side of the road since the war began to try to guard against suicide car bombers and other hostilities. In most parts of the country, local drivers are required to pull over whenever military convoys approach, similar to the way Americans must stop for passing ambulances.

But military convoys can be many vehicles long, and unlike ambulances they tend to creep along rather than speed past stopped cars. Drivers may have to wait several minutes in crowded city centers.

"Obviously any time we drive, it slows them down," Vanek said.

The convoys also frequently cross center medians to drive on the wrong side of the road, scaring oncoming traffic with laser pointers to make them stop. Turret gunners shout at or outright threaten those cars that get too close, and there&#8217;s always the risk that a nervous soldier in a confusing nighttime environment will shoot an innocent Iraqi.

As Iraq becomes safer, many units have gradually scaled back the aggressiveness of their driving. Across Kirkuk, for example, convoys are required to drive on the right side of the road under most circumstances. Yet sharing the road completely has so far been extremely rare, even as many see it as the next logical step in getting back to life as usual.

Some leaders worried that soldiers would be uneasy with the new rules after such a long time of making sure Iraqis steer clear of their vehicles. Yet few in the unit expressed any reservations. Spc. Matthew Riehl, a 1-87 soldier on Vanek&#8217;s security detail, said it wouldn&#8217;t be hard for him to change the procedures that he&#8217;s been trained on for so long. Sharing the road should help build more respect between Iraqis and Americans, he said.

The Iraqis are thrilled with the situation. Riyadh Abdul Kadir, the owner of a Hawijah falafel restaurant, said he understands why he&#8217;s had to get out of the way of military convoys in the past: The soldiers are on a mission, and they are trying to improve the security situation. Still, he said he&#8217;s excited to see the aggressive procedures stop.

"Before, people used to get scared of the convoys because they might shoot at us," Kadir said. "Because they are sharing the road, it gives us more self-confidence and maybe we will start waving at them."