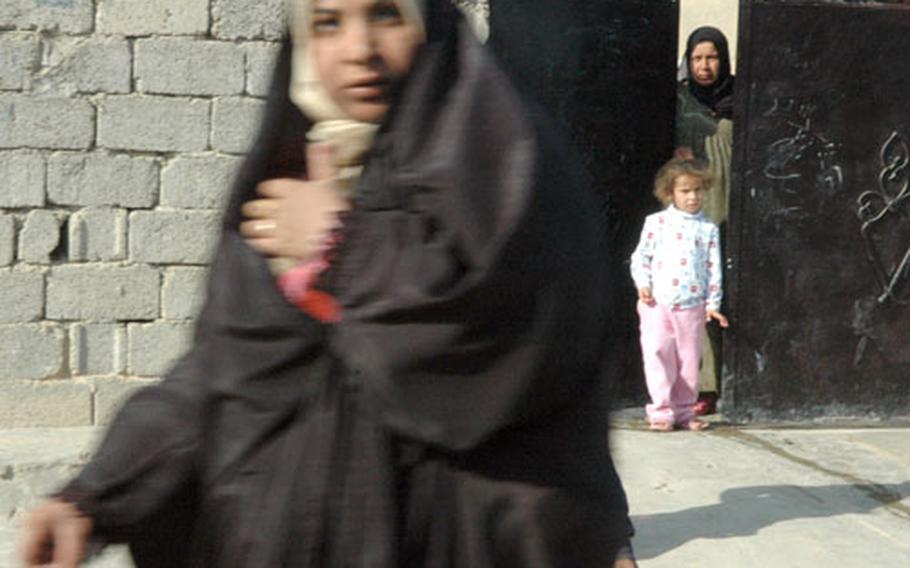 Locals in Hawijah are wary of the American presence. Women and children, as pictured in this 2005 photo, have yelled at passing American patrols. The small, somewhat isolated town is home to intense violence. (S&S file photo)

Small and somewhat isolated in the farmlands between Kirkuk and Beiji about 175 miles north of Baghdad, Hawijah is a destitute sprawl of buildings ridden with the long litany of problems suffered by many towns in Iraq.

Home to about 40,000 people, it has no major industry to speak of or political significance, and its streets are laden with garbage and the evidence of repeated insurgent attacks.

As a small city near the Kurdish northern region of Iraq, it has the potential to be an unremarkable town.

But whenever U.S. forces leave Forward Operating Base McHenry near the city, they drive directly into the teeth of an angry insurgency so violent that it killed five men in the first six weeks the Hawaii-based 2nd Battalion, 27th Infantry Regiment has spent here.

His buddy was shot by a sniper while on guard duty at the JCC, Pinto said, one of two men to be killed by gunmen in the city in the past month and a half.

The others have died from a particularly vicious type of grenade thrown at Humvees rolling through the town or from large improvised bombs.

It&#8217;s a cycle of violence that rises and falls, said soldiers from Company A, the military&#8217;s main unit in Hawijah.

Since the battalion took over at FOB McHenry just before the start of Ramadan, things have definitely been intense, said Spc. Brady Nelson, who has worked in the area for several months with a military police detachment.

How is it that a small, out-of-the-way city close to the Kurdish cultural border came to be so problematic?

Military and Iraqi officials say the reasons are myriad.

Hawijah, according to the military, is populated almost exclusively by Sunni Arabs &#8212; an estimated 98 percent of the population &#8212; who enjoyed a favored status under former Iraqi leader Saddam Hussein when he tried to &#8220;Arabize&#8221; the area around Iraq&#8217;s northern oil reserves.

As with many Sunni Arabs in the region, the fall of the former dictator signaled a reversal of fortune for the minority group. Ethnic Kurds absorbed most of the political power following his removal.

Unemployment is phenomenally high in the city, perhaps 80 percent, due in part to the disbanding of the old Iraqi army, said Col. Fatah Mahmoud Yaseen, Hawijah&#8217;s police chief.

Many in the city are former military members who lost their jobs when U.S. forces rolled north in 2003 and scattered the force.

The net result was a loss of assets, stability and infrastructure, said Capt. Marcus Wright, battle captain for the battalion.

What remains is a hostile climate where insurgents can find passive support among the populace, Payne said, though both U.S. military members and Yaseen said they don&#8217;t believe the local citizens are behind most of the attacks.

Most active insurgents, they believe, come from outside the area and are in Hawijah specifically because it is a low-profile city in the middle of major travel routes through Iraq.

Hawijah lies near the Syrian and Jordanian borders and is fixed along the major route between troubled regions around Baghdad and points in the north.

But the city doesn&#8217;t attract the same attention as places such as Kirkuk and Mosul, allowing insurgents to remain somewhat under the radar.

With the way things have gone lately, it seems like a lot of insurgents are doing just that, said Pfc. Matt Dodge.

&#8220;The military hopes to develop Iraqi security forces to the point that they can handle the crime and unrest that takes place in this area,&#8221; Payne said.

Commanders at FOB McHenry said there have been some bright spots within the Iraqi army in recent days &#8212; instances of local forces gathering their own intelligence, planning and executing their own missions and generally leaving the Americans in a nominal role.

The police, however, have a long way to go to become a credible force.

Yaseen said he needs more men in uniform, and wants to recruit them from inside the city to help battle unemployment. But his policemen lack the basics: training, protective gear and firearms.