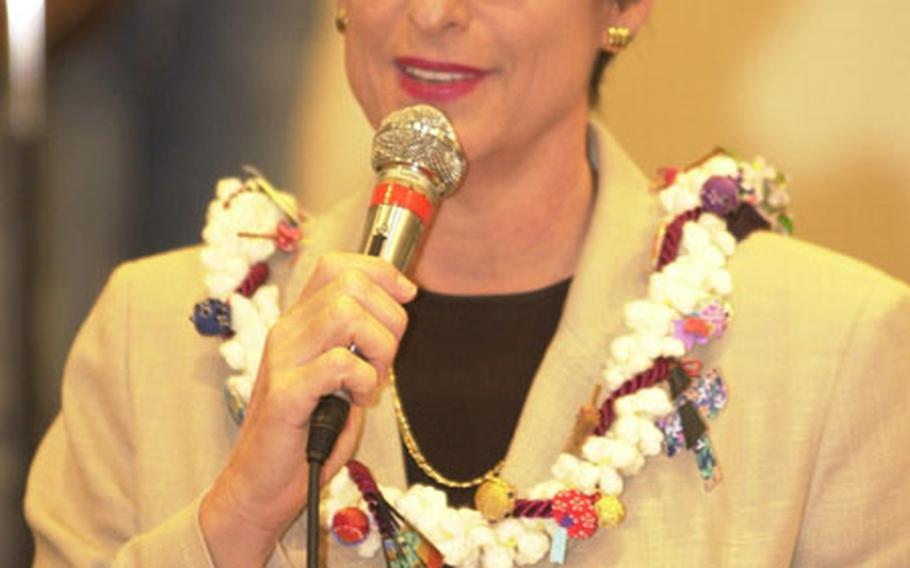 Hawaii Governor Linda Lingle thanks the folks for the reception at the Camp Zama Community Center. (Jim Schulz / S&S)

CAMP ZAMA, Japan &#8212; Hawaii Gov. Linda Lingle is in Japan this week to promote tourism, but she swung through Yokota Air Base and Camp Zama on Monday to thank troops from Hawaii.

The number of Japanese tourists to the islands are down about 30 percent from a year ago, Lingle said. The downward trend started in the wake of the Sept. 11, 2001, terrorist attacks and continued this year with the spread of severe acute respiratory syndrome in Asia.

After lunching at a pig roast and mingling with Hawaiian soldiers and civilians, Lingle spoke to Stars and Stripes about Hawaii&#8217;s efforts to bring an aircraft carrier group to Pearl Harbor and the recent relaxation of strict pet quarantine laws.

Lingle said Hawaii lawmakers are trying to lure a carrier group to use the state as a home port, but she didn&#8217;t plan to discuss the issue during her Japan visit unless &#8220;people bring it up to me.&#8221;

Both Hawaii and Guam are vying to become the next permanent home for an aircraft carrier.

&#8220;The American military should make its decisions, and I expect it will, based on the defense of country and our allies,&#8221; Lingle said. &#8220;If that is the basis, then I think it makes a lot of sense to bring a carrier group to Hawaii &#8230; because there&#8217;s so much uncertainty in this part of the world with North Korea and Asia generally.&#8221;

Noting that four carrier groups are based in Virginia, Lingle said it&#8217;s an issue Hawaii&#8217;s congressional delegation and the Defense Department &#8220;focused on.&#8221;

The new rules cut the maximum stay in quarantine for new pets arriving in the state from 30 days to five &#8212; as long as the animal meets all requirements, such as having the proper bloodwork, shots and an implanted identification microchip.

&#8220;It&#8217;s been such a big issue for animal lovers generally, but especially for the military,&#8221; she said. &#8220;Military at senior levels sometimes would avoid being stationed there because of their animals, and at the lower ranks, there was no choice: they had to leave animals behind.&#8221;

Among the troops Lingle met Monday was Pvt. 1st Class Branden Moore, 21, an intelligence analyst from the 513th Military Intelligence Brigade at Fort Gordon, Ga., and a graduate of Camp Zama High School. Recently back from a deployment in Iraq, Moore was visiting his Hawaiian family at Camp Zama.

A native of Ewa Beach, Hawaii, Moore planned to tell Lingle &#8220;to recognize the military&#8221; in Hawaii.

Lingle was elected in 2002 and became the state&#8217;s first female governor and the first Republican to hold the position in 40 years.