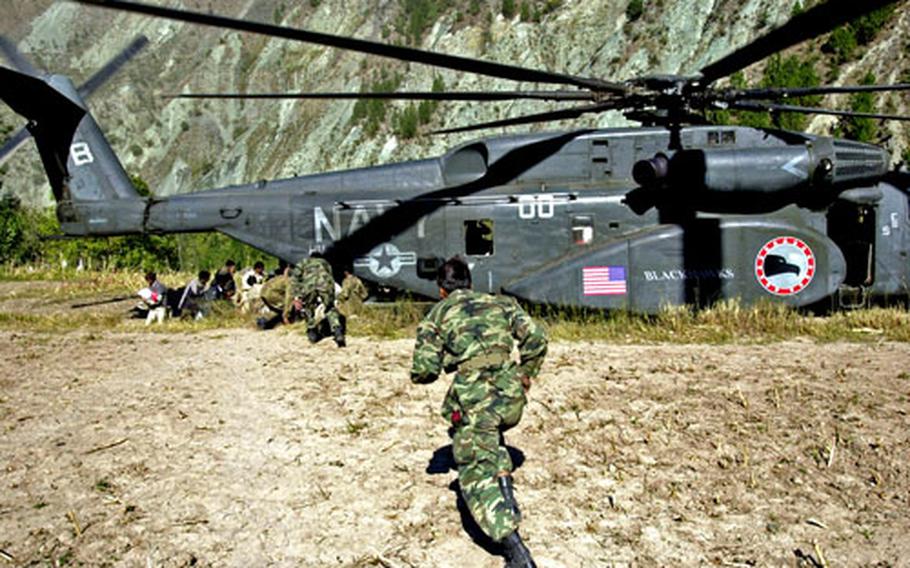 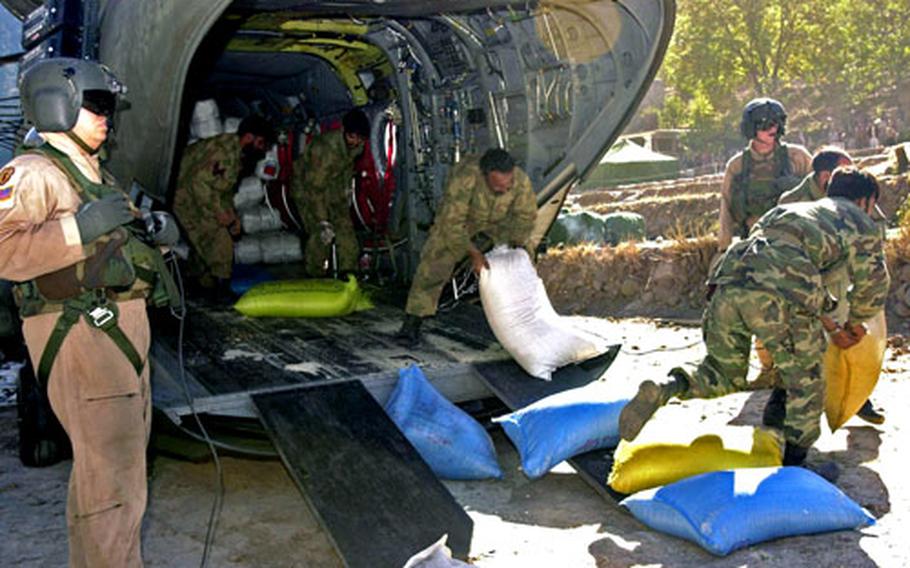 Those affected by the earthquake watch as supplies are unloaded from two U.S. helicopters in the mountain village of Paras, Pakistan. (Fred Zimmerman / S&S) Specialists Scott Madden, left, and Stephen Bergstrom, both CH-47D crew chiefs with the 214th Aviation Regiment, sit in the back of their Chinook after the two delivered supplies to Paras, Pakistan. (Fred Zimmerman / S&S)

Most of the buildings lay in piles of rubble, resembling nothing of their former structure. The village is in ruins after last month&#8217;s 7.6-magnitude earthquake that killed about 80,000 people and left 3 million homeless.

Russell, a CH-47 Chinook pilot with Company B, 214th Aviation Regiment out of Hawaii, and the rest of the soldiers from the company have been in Pakistan for several weeks, typically flying two to three missions a day.

On Sunday, one of their missions was flying supplies &#8212; mostly tents and rice &#8212; to the mountain village of Paras, along with a Navy MH-53 helicopter. Relief helicopters have been flying out of Chaklala Air Field, ferrying much-needed supplies to those who have been affected by the Oct. 8 earthquake.

Russell&#8217;s crew has carried hundreds of those displaced. He said they have five points where they can drop people off, but if they are injured, they fly them back to Chaklala Air Field in Islamabad, where medical treatment is available.

Russell said it&#8217;s a &#8220;really good feeling&#8221; to be able to help the Pakistani people, and those being helped have been very receptive. While the United States as a whole may not have been positively viewed by some people here, Russell said the mission here is changing views.

The U.S. helicopters have been flying with large American flags pasted on both sides, something they normally don&#8217;t do, Russell said.

Army Sgt. Jesus Avery, the flight engineer on Sunday, has seen both the best and worst while here.