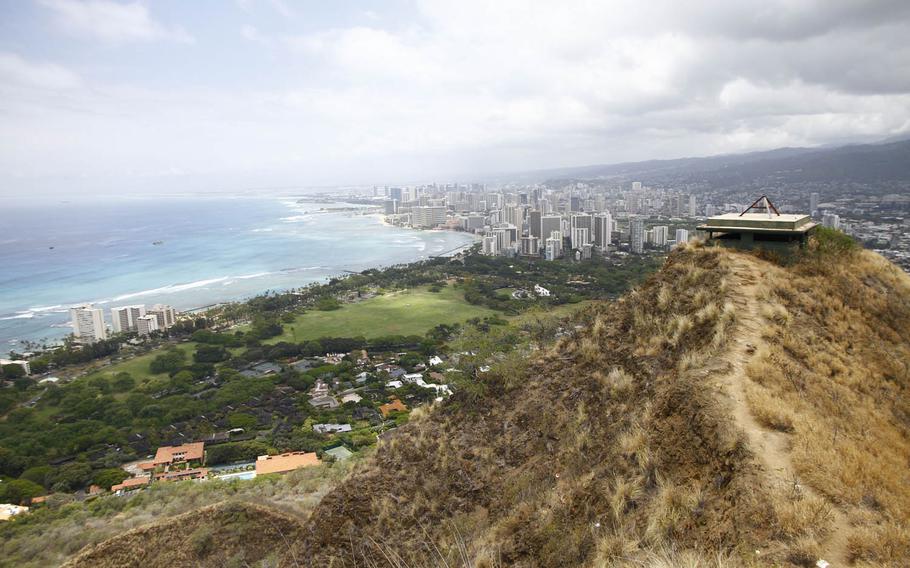 Buy Photo
A lookout atop Diamond Head crater near downtown Honolulu is part of a World War II-era bunker system that lies beneath. One Hawaii legislator suggested the tunnel system could be used in the event of a missile attack on Oahu by North Korea. (Wyatt Olson/Stars and Stripes)

FORT SHAFTER, Hawaii — Hawaii’s Emergency Management Agency has put the brakes on an idea to shelter people in old military bunkers beneath Diamond Head Crater in the event of a North Korean missile attack.

“Based on the current level of threat, we’re focusing on sheltering in place and informing the population of what to do and when to do it,” said Vern Miyagi, the administrator at the Hawaii Emergency Management Agency.

Sheltering is for protection against radioactive fallout, not the nuclear blast itself.

“There’s no such thing as a blast shelter,” Miyagi said. “If you’re at ground zero, you’re not going to survive.”

The agency has fielded a wave of media inquiries after recent reports of a Hawaii state legislator suggesting the World War II-era underground tunnel complex at Diamond Head could be revamped into bomb shelters. Various military and state agencies lease space in the complex, primarily for storage.

North Korea tested its first intercontinental ballistic missile on July 4, sending it 1,550 miles high and 580 miles away, where it splashed into waters between Korea and Japan.

The launch’s success has alarmed some residents of Hawaii, which, along with Alaska, stands as the closest target on U.S. soil.

Gene Ward, the Hawaiian legislator who suggested using the Diamond Head bunkers, told Reuters that North Korea’s most recent launch was “shaking us out of bed.”

Gen. Paul Selva, vice chair of the Joint Chiefs of Staff, told a Senate committee Tuesday that North Korea has not yet shown the capacity to strike any part of the United States with any degree of accuracy or “reasonable confidence of success.”

Still, even a near miss would bring with it radioactive fallout, and Miyagi’s agency sees that as a threat requiring preparation.

While some of the bunkers below Diamond Head, which is near Waikiki Beach, could be retrofitted, Honolulu’s usual traffic gridlock would make it impossible to reach the site in less than the 15 to 20 minutes warning time the public would likely have.

Miyagi said the agency is poised to kick off a state-wide public information campaign advising “sheltering in place” in lieu of mass migrations to shelters.

“The situation right now is that any inbound missile from Korea would take about 20 minutes flight time,” he said. “By the time we get word from Pacific Command to be able to notify the public as far as any kind of warning, the time will be shorter than that, so there would be very little time to drive out to shelters or find shelters.”

Public fallout shelters had their heyday in the 1960s when the U.S. and Soviet Union had thousands of nuclear weapons pointed at each other.

Whether or not such shelters would have proven effective during an attack back then is debatable, but the current wisdom holds that being in transit during the first hours of fallout from a nuclear blast poses the greatest risk to health.

That means individuals comprising a family, for example, have to plan on separate stays at work, home, school or wherever if an ICBM were to ever detonate near Hawaii — for days, perhaps several weeks.

“Each family or individual has to have that kind of plan in place. You’re not going to have time to get in your car, pick up your kids and wife and get home,” he said.