Hawaii bases imposing under-21 ban on tobacco sales, use 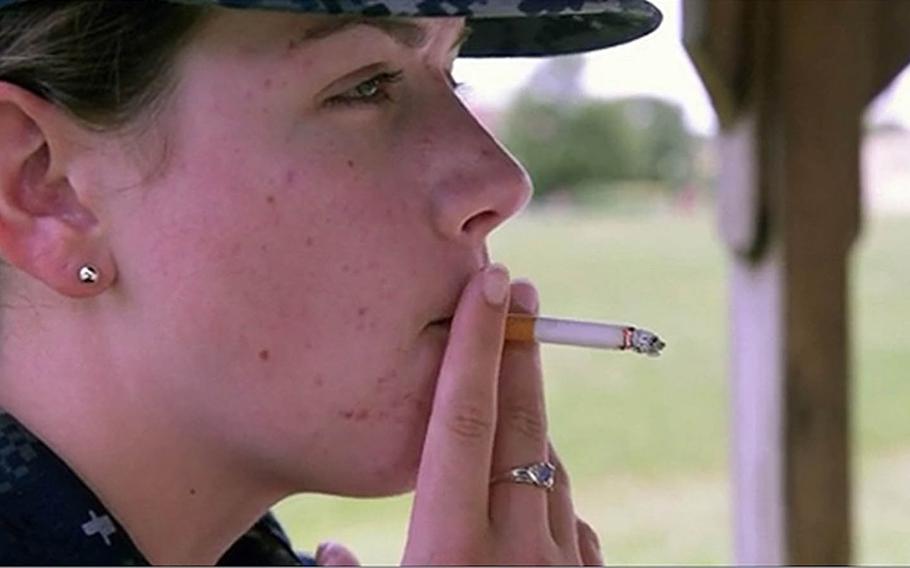 Beginning New Year's Day, those younger than 21 will be prohibited from buying or using tobacco products at military installations throughout Hawaii. The new rules coincide with a similar measure passed by the Hawaii legislature in June that takes effect Friday, Jan. 1. 2016. (Courtesy of the U.S. Navy)

Beginning New Year’s Day, military installations throughout Hawaii will prohibit anyone under age 21 from buying or using tobacco.

The new rules by the Navy, Marines, Army and Air Force coincide with a similar measure passed by the Hawaii legislature in June that takes effect Friday.

Hawaii is the first state to institute an under-21 ban on tobacco sales and possession, which also includes so-called e-cigarettes, according to the Campaign for Tobacco Free Kids. More than 100 U.S. municipalities have raised the minimum age for tobacco sales to 21, with California considering a state-wide ban.

Military installations don’t always follow state law on such matters. Even though Washington and Colorado have legalized recreational use of marijuana, servicemembers are not allowed to use the drug in those states.

The Navy’s ban does not apply to personnel or transactions while aboard U.S. naval vessels because they fall under federal laws. Tobacco is sold aboard some ships. The Navy banned smoking in submarines at the end of 2010, but talk last year of a fleet-wide ban met resistance from some members of Congress.

Some servicemembers stationed in Hawaii were less than enthusiastic about the new tobacco regulations.

“I think it’s ridiculous,” electronics technician Alan Cobreros, 20, said while playing pool Tuesday at Joint Base Pearl Harbor-Hickam. “Reason being is because in the military there are a lot of stress levels that a lot of people have to deal with, and people have a lot of different ways of coping with it.”

Cobreros, a smoker, said some sailors use alcohol to cope with stress, but that’s not a legal option for anyone under 21.

“So you turn to smoking or tobacco,” he said. “We don’t look at it as a bad way. That’s one of the ways me and my shipmates deal with that. Taking it away like that will take away the way they deal with stress.”

Across the pool table, Desmond Tate, 22, an information technologist who does not use tobacco, said he also opposed the new rules.

“I feel that if we sign our name on the dotted line to fight for our country, why shouldn’t we be able to smoke?” he said. “If we’re grown enough to serve in our military, why can’t we be grown enough to make our own decisions and smoke cigarettes?”

Fuller argued that being tobacco-free “is one of the best things we can do to improve fitness and readiness.”

Because it’s such a new strategy, it’s not entirely clear what the public health results will be from setting an age limit for tobacco; however, it’s well established that many smokers transition to regular, daily use between the ages of 18 and 21, and that smokers in that age group routinely supply minors with tobacco, according to the Campaign for Tobacco Free Kids.

Tate predicted the ban will do more harm than good.

The ban on Navy and Marines installations was issued by the Chief of Navy Naval Operations and is not a “punitive order,” meaning active-duty servicemembers who violate it will not be subject to Article 92 discipline, Navy spokesman Bill Doughty said. But servicemembers cited by state or local police under Hawaii’s new tobacco law are subject to fines and community service, he said.

Petty Officer 3rd Class Christopher Cummings, who said he is not a tobacco user, suggested that sailors already in the Navy who are under 21 “should be able to get some kind of grandfathered-in program” so that they can use tobacco. New recruits would learn of the regulation before joining.

“But those who are already doing it and are used to it, they should at least get some kind of leniency,” he said.

The Navy is emphasizing resources to help sailors and their families quit tobacco, such as the Navy and Marine Corps Public Health Center website, which includes videos and other cessation tools. The Army is referring soldiers to a Tricare site: www.tricare.mil/tobaccocessation.