Hawaii-based unit latest to head to Korea for rotational deployment 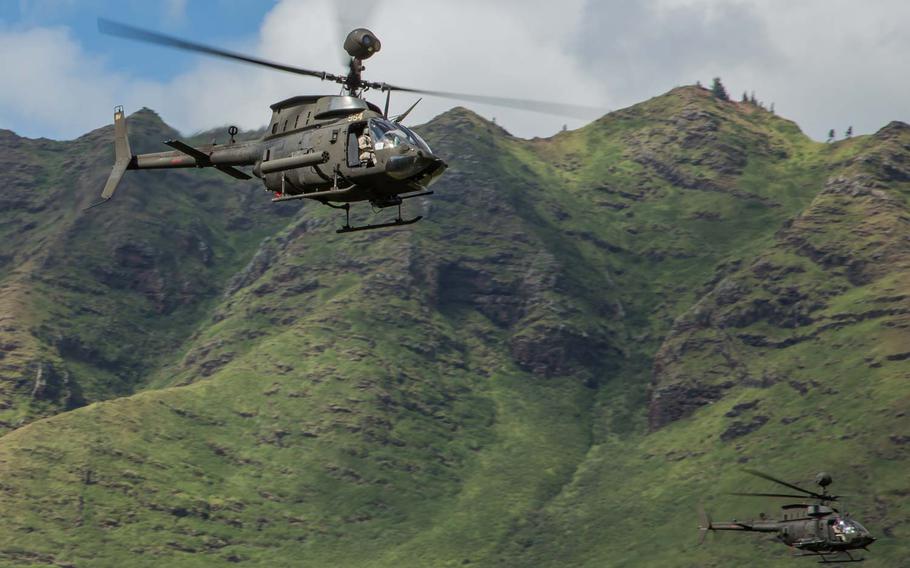 Aviators with the 25th Combat Aviation Brigade, 25th Infantry Division, conduct a training exercise in Hawaii on Nov. 26, 2014, in preparation for an operational deployment to the Republic of Korea. (Mark Leung/U.S. Army)

SEOUL, South Korea — A Hawaii-based brigade is heading to South Korea on a nine-month rotational deployment, part of the Army’s increasing use of deploying intact units to the peninsula rather than individual troops on one- or two-year tours.

Officials have not said when the 2-6 Cavalry will arrive, where its troops will be stationed, or how many soldiers will be part of the deployment, though 8th Army spokesman Col. Shawn Stroud said the unit will be attached to the 2nd Infantry Division as part of the standard rotational deployment.

“This is just part of the Army’s rotational concept,” he said Thursday.

The Pentagon announced last month that the 2ID’s 1st Armored Brigade Combat Team will be deactivated in June 2015 and replaced by Fort Hood’s 2nd Brigade Combat Team, 1st Cavalry Division, which is coming to the peninsula on a rotational deployment.

Supporters say the use of rotational forces means more stability and less turnover within units during their deployments.

U.S. Forces Korea commander Gen. Curtis Scaparrotti last week said the “prudent deployment of additive and rotational forces to Korea” in the past year has “enhanced the alliance’s readiness posture and reinforced the U.S. commitment to the Republic of Korea.”

According to the 25th ID, the brigade’s preparation for the deployment has included water gunnery training, engaging mechanized enemy forces, conducting convoy operations and relocating 95 pieces of equipment from one side of Oahu to the other. Soldiers participated in live-fire exercises and set up mobile gas stations on the Big Island.

“We had the ability to train at several different locations in Hawaii over water and land, in a similar operations environment that we encounter in Korea,” Maj. Mark Fulmer, operations officer in charge, was quoted as saying in a news release. “Our ability to react here allows us to go out and do the humanitarian assistance and disaster relief throughout the Pacific in support of U.S. Army Pacific,” he said. “In Korea, we will be able to do the same operations tactically.”