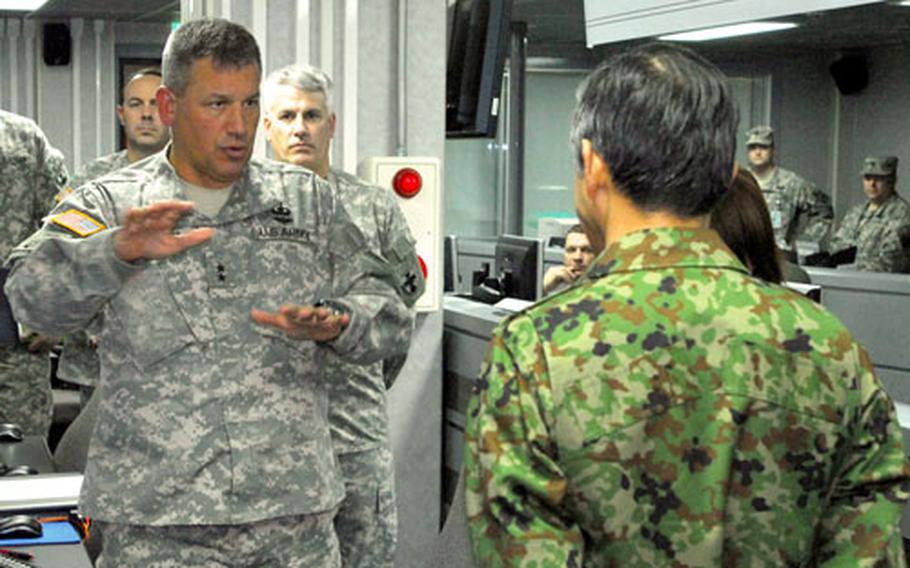 A major Army logistics command is busy perfecting the playbook for the conduct of military operations in the Pacific.

Members of the Hawaii-based 8th Theater Sustainment Command are participating in a two-week exercise out of Camp Zama, Japan, that the command hopes will enhance its ability to carry out combat or humanitarian operations in the region.

The 8th TSC, which stood up in 2006, supplies and coordinates services to all Army commands in the Pacific, covering a region from Alaska to South Korea.

As part of the exercise, 8th TSC sent a team to Camp Zama earlier this month to establish a forward command post to manage a replicated, real-world scenario while maintaining contact with the command headquarters at Fort Shafter, Hawaii.

"It just makes sense to come here for a lot of different things that could occur in the Pacific Rim," said Mason, 8th TSC&#8217;s commander.

Mason said the exercise is helping to "write the doctrine" for the relatively new Army theater sustainment commands, which he said frequently communicate with each other.

He said the original TSC doctrine did not account for a deployable capability &#8212; making a forward command post impossible.

Members of the 8th are using their experience to help produce manuals that will establish standard procedures for such operations.

"We learned a lot," Mason said at the exercise&#8217;s halfway point Thursday.

The team includes about 30 members of the 10th Support Group from Torii Station on Okinawa.

They operate as response cells to 8th TSC, according to the group&#8217;s commander, Col. Jim Woodard.

Woodard said the exercise gives his junior and noncommissioned officers valuable experience working with members of a higher level command, and he said the interpersonal contact helps build unity.

"Torii Station is 6,000 miles away from Hawaii, so it gives my staff an opportunity to get face-to-face with our higher headquarters and soldiers that are at the end of an e-mail, a phone line or [video teleconference] and actually interact with those guys," he said.

Mason said the importance of that contact is the same from 8th TSC&#8217;s perspective.

"It is all about human team building," he said. "If we know each other and trust each other, most problems can get solved, so these kinds of times are absolutely invaluable."