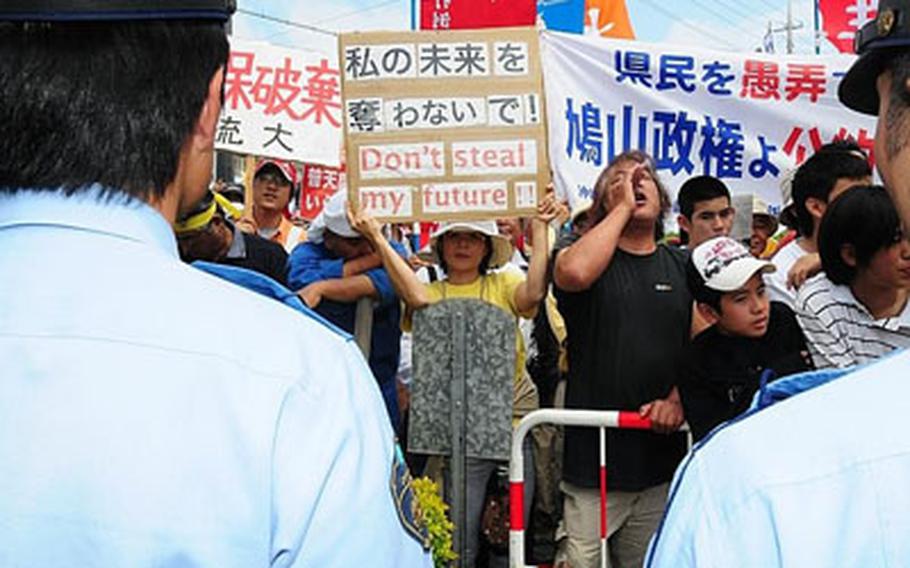 Buy Photo
Demonstrators gather outside the Futenma Elementary School No. 2, chanting anti-military base slogans, while inside some protesters shouted "Shame! Shame!" to Prime Minister Yukio Hatoyama during a Town Hall meeting in which he declared that U.S. Marine units would not be transferred off Okinawa. (Photos by Matt Orr/Stars and Stripes)

Buy Photo
Demonstrators gather outside the Futenma Elementary School No. 2, chanting anti-military base slogans, while inside some protesters shouted "Shame! Shame!" to Prime Minister Yukio Hatoyama during a Town Hall meeting in which he declared that U.S. Marine units would not be transferred off Okinawa. (Photos by Matt Orr/Stars and Stripes) 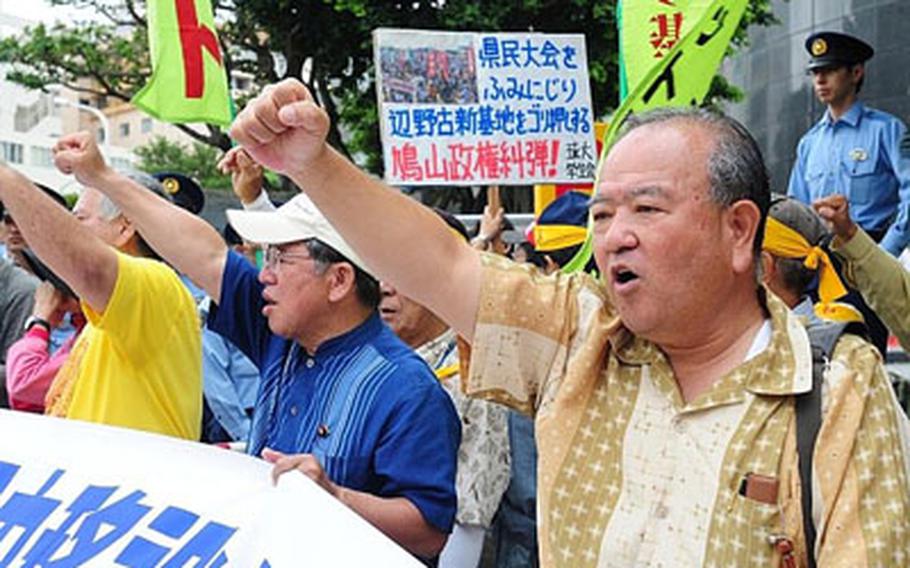 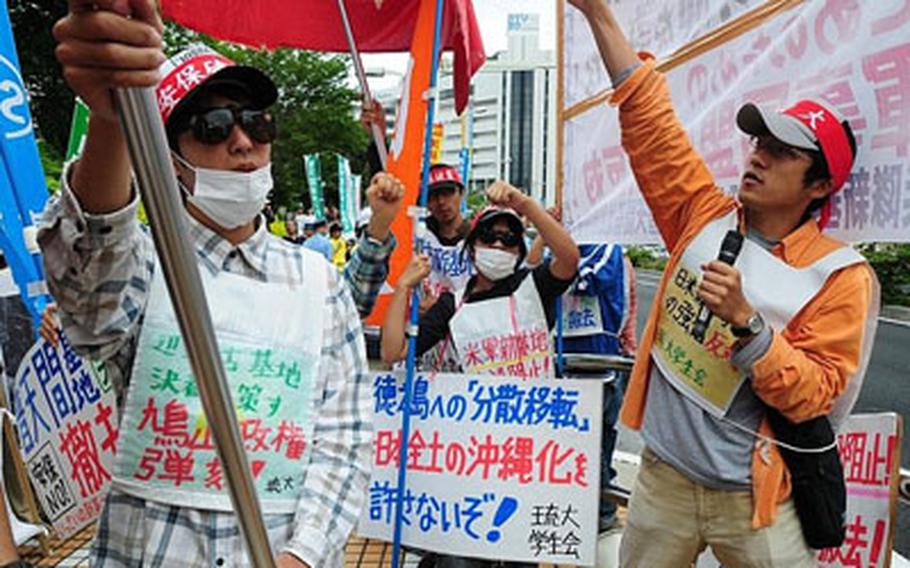 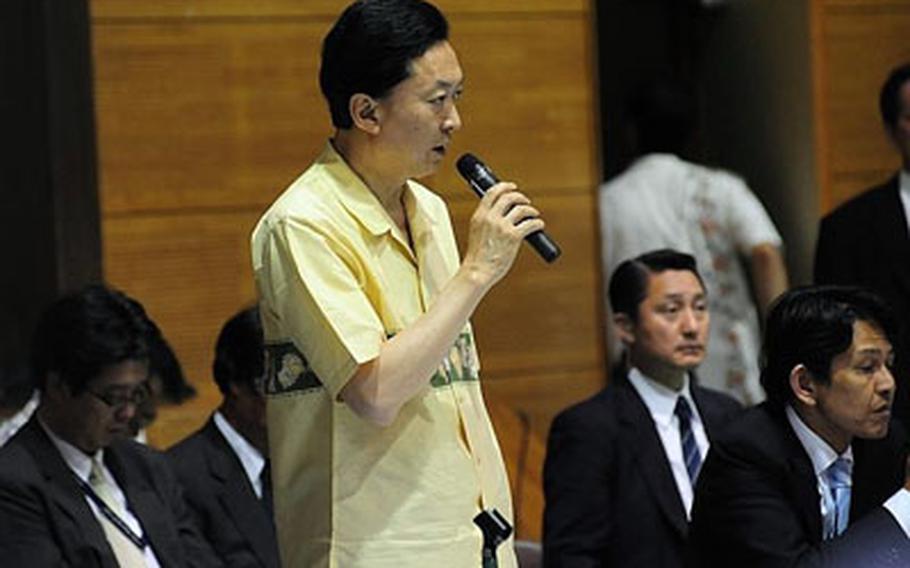 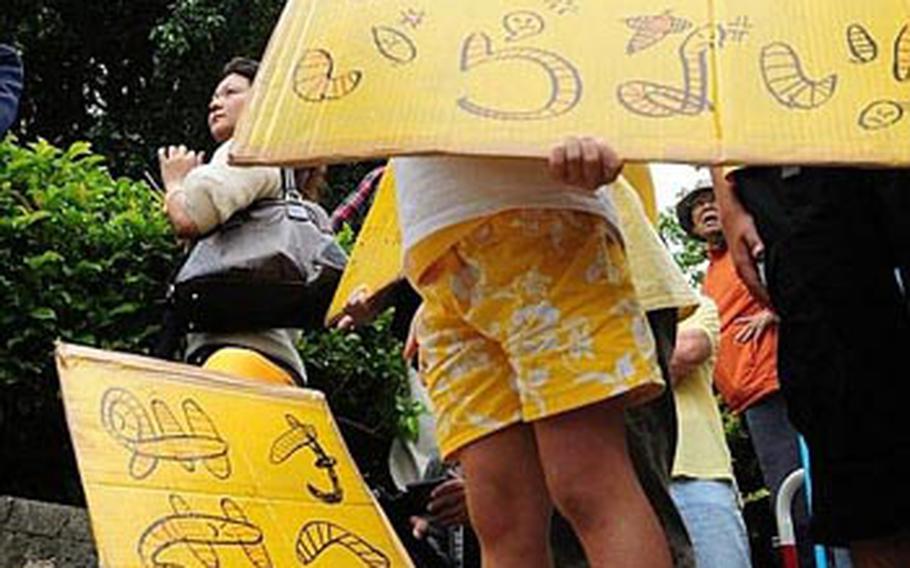 Young and old turned up Tuesday in Ginowan to voice their concerns and anger over the decision by Prime Minister Yukio Hatoyama not to move U.S. Marine air units off Okinawa. ()

GINOWAN, Okinawa &#8212; Seeking to end months of escalating tensions with the United States, Prime Minister Yukio Hatoyama announced here Tuesday that he is dropping an idea to move all U.S. Marine Corps air units off of Okinawa, dashing the hopes of island residents and political leaders that they might be rid of the American military facility that has caused irritations for decades.

Apologizing to Okinawans that he will be unable to &#8220;relieve the burden of Okinawa,&#8221; Hatoyama told a town hall meeting that he had concluded after an eight-month review that a 2006 agreement between Washington and Tokyo to close Marine Corps Air Station Futenma and move the facility to a less-populated area of the island would have to be substantially honored.

Hatoyama said tough preliminary discussions with U.S. officials made it apparent that the air units must be relocated within the island.

&#8220;When we considered the need for deterrent power under the current East Asia environment, we couldn&#8217;t help but to once again recognize the importance of the U.S.-Japan alliance,&#8221; Hatoyama said. &#8220;In the future, there might be the possibility to move the units to Tinian or some other U.S. territory. Under the current international environment, unfortunately, it is not possible now.&#8221;

Some of the residents gathered inside a local elementary school to hear the prime minister speak shouted &#8220;Shame! Shame!&#8221; One woman who attempted to approach Hatoyama had to be restrained.

The day marked Hatoyama&#8217;s first visit to the island prefecture and his first public statement that some air operations will have to remain on Okinawa. It also was an indication that he&#8217;s yielding to U.S. pressure to stick to the 2006 U.S.-Japan pact. He announced that official talks with U.S. officials concerning the relocation of Futenma began Tuesday in Tokyo.

Earlier in the day, Hatoyama told Okinawa Gov. Hirokazu Nakaima that moving all Marine air units outside the prefecture would be &#8220;impossible.&#8221;

When he took office in September, Hatoyama embarked on a review of the 2006 agreement that calls for moving the Marines from Futenma to a new air facility on Camp Schwab and landfill in Oura Bay.

Nakaima reminded Hatoyama of the 90,000 Okinawans who attended an April 25 rally to demand the immediate closure of Futenma and oppose any new base construction on the island. He asked Hatoyama to &#8220;accept their voices and solve the issue in a form that is acceptable for the Okinawan people.&#8221;

They drowned out the chants of about 15 people who gathered nearby to show their support for keeping the Marines on the island.

Okinawa officials for months have expressed outrage that the prime minister considered alternative plans without first seeking their input.

Hatoyama&#8217;s self-imposed end-of-May deadline to resolve the issue is fast approaching. He is reportedly looking at a modified Camp Schwab plan, building the runways on pilings instead of landfill and possibly moving some of the aircraft and Marines to Tokunoshima, a small island about 125 miles northeast of Okinawa.

No details of his plan were disclosed Tuesday. Nakaima later told reporters he still hasn&#8217;t seen a specific proposal.

Later in the day, while Hatoyama addressed 105 people gathered inside the Futenma elementary school just outside the base fence line, the chants of 100 anti-base protesters gathered outside were occasionally drowned out by the noise of cargo planes and helicopters flying overhead.

After the town hall meeting, Hatoyama traveled north to Camp Schwab, where Marines gave him a tour of the area that would be used for the new air facility under the 2006 plan.

His last appearance was in Nago late Tuesday afternoon to meet Mayor Susumu Inamine, elected on an anti-base platform last January. Camp Schwab is in a rural area of Nago.

Upon arrival at the city hall, Hatoyama was met by more than 500 protesters, many wearing yellow, the official color for Okinawans opposed to the base relocation plan.