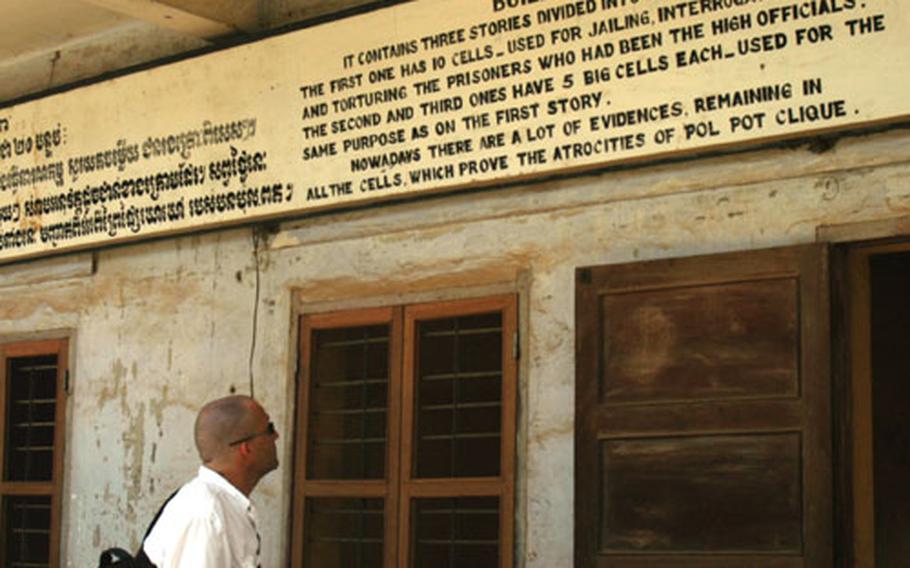 U.S. Air Force Tech Sgt. Bryan Gray reads a sign at Tuol Sleng, a former Khmer Rouge prison that has been converted into a genocide museum. (Courtesy of USAF)

U.S. Air Force Tech Sgt. Bryan Gray reads a sign at Tuol Sleng, a former Khmer Rouge prison that has been converted into a genocide museum. (Courtesy of USAF) 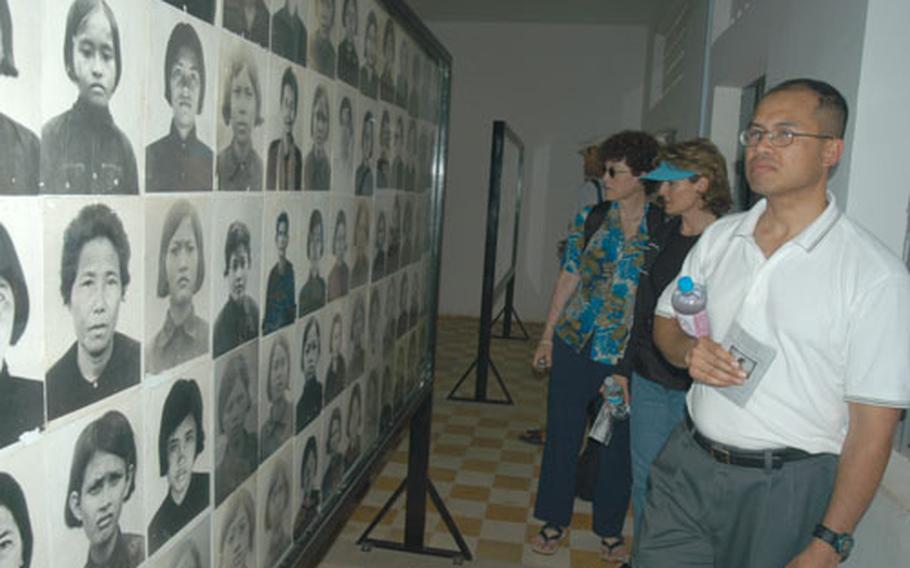 U.S. Air Force Maj. Vira Em (right) looks at photos of assassinated prisoners at Tuol Sleng, a former Khmer Rouge prison that has been converted into a genocide museum. (Courtesy of USAF)

PHNOM PHEN, Cambodia &#8212; U.S. military medics have arrived here to assist people who have been injured in mine explosions and other war-related traumas.

The blast resuscitation and victim assistance mission &#8212; also known by medics as BRAVA &#8212; is a Pacific Command effort being conducted in Kep, Cambodia, through May 31.

&#8220;The primary objective of BRAVA is to provide U.S. military surgeons with experience in war-related injuries, specifically land-mine injuries,&#8221; said U.S. Air Force Lt. Col. Diep Duong, the team leader for BRAVA 2004. &#8220;We may be able to help as many as 600 to 700 people who normally would not be able to afford medical care or have access to medical care, particularly surgical care.&#8221;

Duong said the humanitarian-style mission is important for several reasons. &#8220;It provides basic health-care needs to the people who are really in need, and we are able to focus on surgical care that can restore or improve bodily functions so that the people can be productive and able to work or farm again,&#8221; she said.

While in Cambodia, military medics also will hone skills, including field medicine, in austere environments. The conditions will be harsh, Duong said, with limited electricity provided by generator, some running water, tremendous heat and humidity and mosquito infestation.

&#8220;The U.S. medical health-care personnel will have a better appreciation for work in this type of environment and will be able to perform these vital skills in similar environments,&#8221; she said.

Medics were to set aside time during their mission to host a community-relations event, with games for local children and a cookout for local leaders and officials. The humanitarian medical mission is the third such trip to Cambodia. Similar efforts have also been conducted in Vietnam and Sri Lanka.