Harry Potter fans reach the end of a magical journey Five-year-old Lydia West of Darmstadt, Germany, gets into the spirit of the Friday night-Saturday morning release of the final book installment of Harry Potter. Her older brother, Collin, won a replica of the magical hat, moments earlier at a Harry Potter look-a-like contest at the Army and Air Force Exchange Service bookstore in Wiesbaden. (Kevin Dougherty / S&S)

Five-year-old Lydia West of Darmstadt, Germany, gets into the spirit of the Friday night-Saturday morning release of the final book installment of Harry Potter. Her older brother, Collin, won a replica of the magical hat, moments earlier at a Harry Potter look-a-like contest at the Army and Air Force Exchange Service bookstore in Wiesbaden. (Kevin Dougherty / S&S) Copies of the latest — and final — Harry Potter book were, you could say, flying off the shelve shortly after midnight Friday. Laurel Arismendi, who settled up with a BookMark cashier in Wiesbaden, Germany, said she’s going to miss Harry and his wizardly cohorts. “I’ve been a fan of Harry Potter’s ever since that first book came out.” (Kevin Dougherty / S&S) Among the activities held at the Army and Air Force Exchange Service BookMark in Wiesbaden, Germany, on Friday was decorative painting. One of the more popular requests was the crest of Slytherin, one of the four houses at Hogwarts School of Witchcraft and Wizardry featured in the Harry Potter books and movies. (Kevin Dougherty / S&S) Collin West of Darmstadt, Germany, got into the spirit late Friday night while waiting for the release of the final book installment of Harry Potter. The 9-year-old won a replica of the magical Sorting Hat in a Harry Potter look-a-like contest at the Army and Air Force Exchange Service BookMark in Wiesbaden. (Kevin Dougherty / S&S) 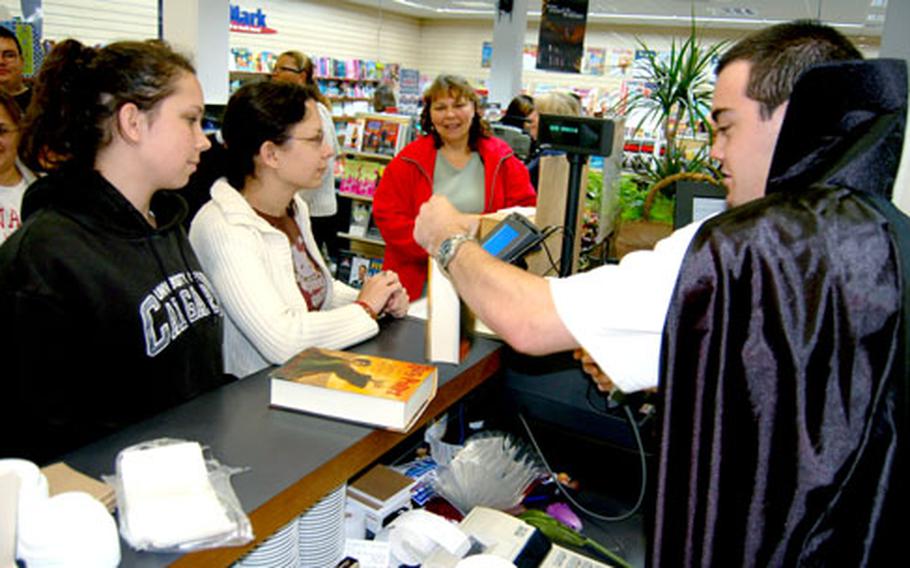 Sarah McKay, left, accompanied by her sister, Rhianne, and mother, Melinda, rose early Saturday morning and traveled from Brunssum to be the first to purchase "Harry Potter and the Deathly Hallows" at AAFES&#39; BookMark at U.S. Army Garrison Schinnen. Sales associate Jon Calderwood, who made the sale, joined other staff members in dressing up the store and themselves. (Tom Budzyna / U.S. Army)

WIESBADEN, Germany &#8212; This was one witching hour that couldn&#8217;t come soon enough for a lot of well-meaning mortals.

No matter the time zone, no matter the events of the preceding day, countless numbers of young and old readers across the globe queued up at midnight Friday to learn the fate of a certain boy wizard.

In U.S. military communities across Europe, kids rarely accustomed to staying up late &#8212; really late &#8212; were granted a parental pardon in the name of Potter. The Army and Air Force Exchange Service, through its BookMark stores, was more than willing to be complicit, staging all sorts of activities at select locations.

&#8220;This is a great thing for them to do,&#8221; Dana West of Darmstadt, who was present with her husband and two children, said of AAFES as she looked over the crowded bookstore in Wiesbaden.

It was a half-hour before midnight and kids ranging from toddlers to teens were playing Potter trivia, getting their faces painted or traipsing around in wizard&#8217;s wear, wand in hand.

&#8220;They&#8217;re not real wands,&#8221; 4-year-old Liam Coulter whispered with assurance. He had traveled with his parents, Maj. Sean and Katie Coulter, from Hohenfels for the big event.

While the wands weren&#8217;t real, in a magical sense, the owls at the BookMark in Schinnen, Netherlands, certainly were.

Unlike bookstores in places such as Wiesbaden and Heidelberg, Schinnen opted to open two hours early on Saturday, instead of going the midnight route.

But that didn&#8217;t stop copies of &#8220;Deathly Hallows&#8221; from, figuratively speaking, flying out the door. Anderson said Saturday afternoon that she had already sold more than half of the 400 books she was allotted.

In Heidelberg, that many hardbacks were sold between midnight and 3 a.m., according to Arthur Varjabedian, operations manager for the main exchange.

Chris Costella, the bookstore manager in Wiesbaden, said of the 800 copies he had, more than half had been sold by late Saturday afternoon.

As an aside, his boss, Tony Ventura, said that for the past week the books had been kept under lock and key in a store office, with a security camera running 24 hours a day to monitor the treasured text.

That would be fine with 20-year-old Laurel Arismendi, who has grown up with the bespectacled boy. She&#8217;s read each book more than once, and says there are many lessons and insights for people, young and old, to glean.