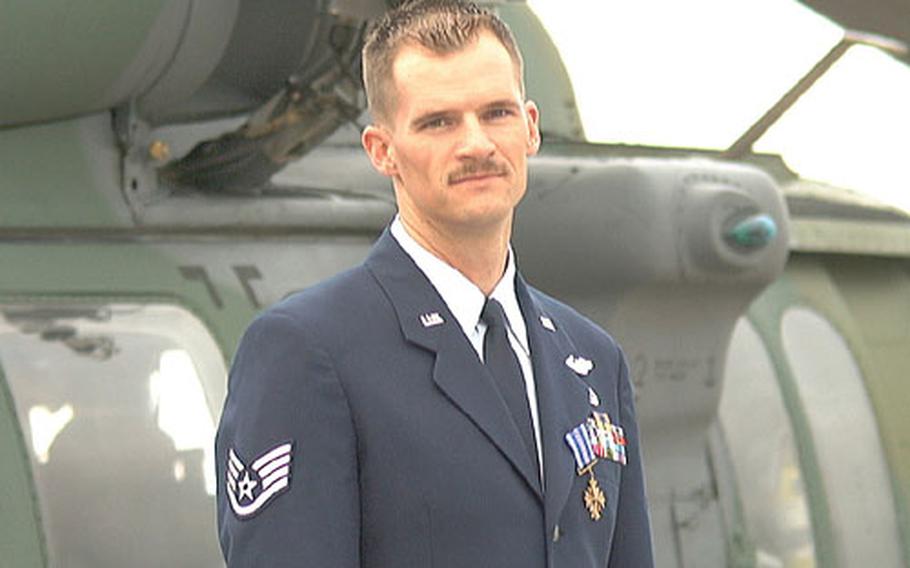 KADENA AIR BASE, Okinawa &#8212; Staff Sgt. Kevin Stewart didn&#8217;t even see the hostile fire directed against his aircraft during a rescue mission in Afghanistan 14 months ago.

Peering through night-vision goggles, the helicopter gunner was trying like mad to locate the position of U.S. troops on the ground fighting al-Qaida and Taliban forces.

He was too busy saving lives to notice the mortar, rocket-propelled grenades, artillery and small-arms fire lighting up the night sky and threatening his own life.

Stewart was aboard one of two HH-60G Pavehawks that passed through enemy territory about 90 miles south of Kabul to extract three soldiers critically injured during the fierce battles of Operation Anaconda.

Currently assigned to Kadena&#8217;s 33rd Rescue Squadron, Stewart was, at the time of the rescue, a member of the 66th Rescue Squadron from Nellis Air Force Base, Nev.

&#8220;It was dark as hell,&#8221; the airman said, recalling how the helicopters raced over mountainous terrain just 100 feet above ground, without precise coordinates to guide them. Twice they had flown to the wrong location because of erroneous data they received.

All the while, they continued to receive fire, but they did not return it, so as not to give their position away, he said.

Finally, the gunner visually located the correct landing zone and provided the flight commander precise navigational data to land the aircraft without crashing into the terrain or personnel on the ground.

As the landing zone came under enemy fire, he directed rescue crews to the injured and arranged the aircraft&#8217;s cabin to carry the wounded.

Stewart noted that the March 3, 2002, rescue he participated in came on the heels of another the night before. Two other Pavehawk search-and-rescue crews entered the same mountainous area to extract nine critically wounded troops.

The members of the four crews involved in the back-to-back missions also were awarded, Stewart said. Seventeen members of Nellis&#8217; 66th and 58th Rescue Squadrons received Distinguished Flying Crosses last November for their heroic roles in the rescues.