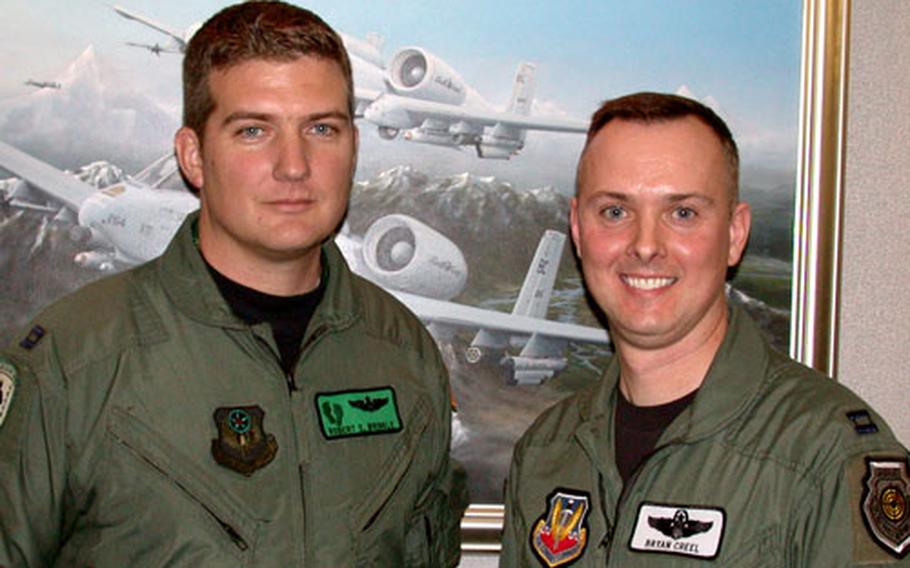 ARLINGTON, Va. &#8212; Standing in the sand-swept desert near Kharbut, Iraq, the smoking remnants of his CH-47 Chinook somewhere in the darkness behind him, Army Chief Warrant Officer 2 Steve Froeschile wondered if help would ever come.

&#8220;It seemed like one of the longest nights of my life,&#8221; Froeschile said Monday at the Pentagon, recounting the April 16, 2004, crash and his subsequent rescue along with four fellow crew members.

The Chinook, which belonged to the Hawaii National Guard&#8217;s C Company, 193rd Aviation Regiment, was on a routine resupply mission along with two other choppers when the pilots found themselves engulfed in a blinding sandstorm, Froeschile said.

Unable to spot the other two Chinooks, and fearful of a midair collision, &#8220;I made the decision to go ahead and land the aircraft,&#8221; Froeschile said.

The Chinook hit the ground and rolled over.

Back at Balad air base, north of Baghdad, the crews of Capt. John Bryan Creel&#8217;s Jolly 11 and Capt. Rob Wrinkle&#8217;s Jolly 12 combat search and rescue teams were on duty, prepared to respond to any air-related emergencies.

Their airframe was the HH-60G Pave Hawk, one of the most sophisticated helicopters in the U.S. military.

The rescue the two crews would perform that night, conducted in near-zero visibility while avoiding ground fire from insurgents, earned them one of the Air Force&#8217;s most prestigious awards, the 2004 Air Force Clarence MacKay Trophy.

The MacKay Trophy is awarded annually by the Air Force and the National Aeronautic Association for the most meritorious flight of the year by an Air Force person, persons or organization.

Describing their mission in a press briefing at the Pentagon together with their crews, Creel and Wrinkle said that when they hit the sandstorm that downed the Chinook, they decided to find the edge, then duck underneath and fly just 20 feet about the ground until they spotted their objective.

This took some mighty fancy flying: more than seven miles of &#8220;nap of the Earth&#8221; navigating, during which the pilots skimmed the ground so closely they had to &#8220;hop&#8221; over power lines and other terrain obstacles.

Amazingly, despite the total destruction of their Chinook, all five Army crash survivors were unharmed.

Once the passengers had been recovered, however, the trip back to Balad was just as hair-raising as the rescue, thanks to multiple surface-to-air missile attacks on both helicopters.

Creel was no stranger to bad weather during his more than 20 years of military flying, first for the Army and now the Air Force, he said.

But getting attacked from the ground by rocket-propelled grenades and small arms fire was a first-time experience &#8212; and, hopefully, the last, Creel said.

Finally, almost three hours after departing the air base, the two crews deposited their Army passengers safe and sound back at Balad.