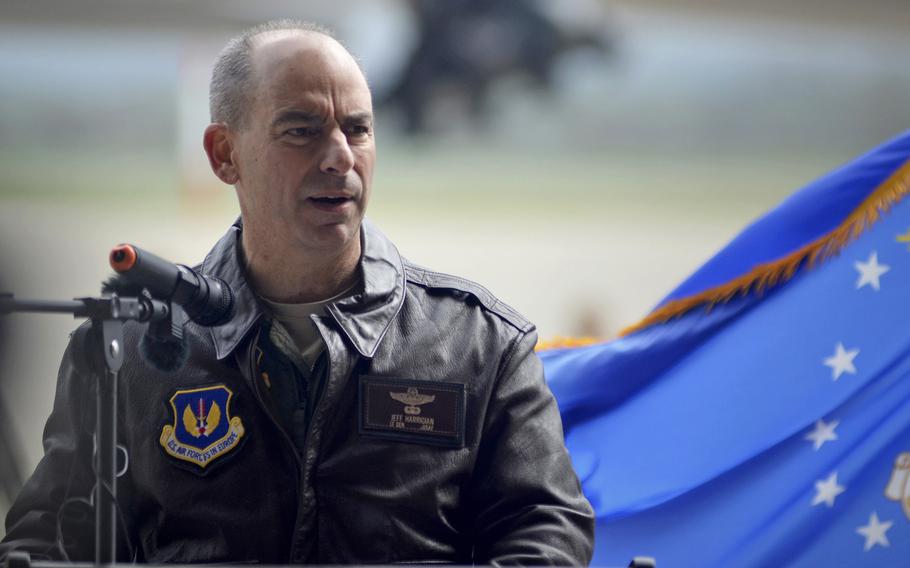 KAISERSLAUTERN, Germany — The next boss of U.S. airmen in Europe shouldn’t have a very steep learning curve on the job.

Lt. Gen. Jeffrey L. Harrigian, deputy commander of U.S. Air Forces in Europe — Air Forces Africa since last fall, has been nominated for a fourth star and to lead the command.

If confirmed by the Senate, Harrigian would succeed Gen. Tod D. Wolters. Wolters earlier this month was nominated to be the next NATO Supreme Allied Commander and commander of U.S. European Command, replacing U.S. Army Gen. Curtis Scaparrotti.

Like Wolters, Harrigian is a fighter pilot and U.S. Air Force Academy alumnus, having graduated from the Colorado Springs, Colo., service academy in 1985.

Harrigian has more than 4,000 hours flying the F-22, F-15C and MQ-1 Predator. He’s flown combat missions in support of operations Just Cause — the U.S. invasion of Panama in 1989 – Desert Storm and Inherent Resolve.

Prior to coming to Europe, Harrigian led Air Forces Central Command and the combined forces air component of U.S. Central Command for two years. He oversaw air operations in the Middle East during a critical time in the war against the Islamic State, which has seen its territory greatly diminished in Iraq and Syria.

As USAFE-AFAFRICA commander, Harrigian will be responsible for providing airpower to U.S. European and U.S. Africa commands — an area that includes 104 countries in Europe, Africa, Asia and the Middle East.