Harlem Globetrotter players "pray" for audience member Eli Gidlow, son of an RAF Lakenheath officer, to make a basket during a performance last week at RAF Mildenhall, the last stop on their tour of U.S. Air Force bases in Europe. (Sean Kimmons / S&S)

Harlem Globetrotter players "pray" for audience member Eli Gidlow, son of an RAF Lakenheath officer, to make a basket during a performance last week at RAF Mildenhall, the last stop on their tour of U.S. Air Force bases in Europe. (Sean Kimmons / S&S) 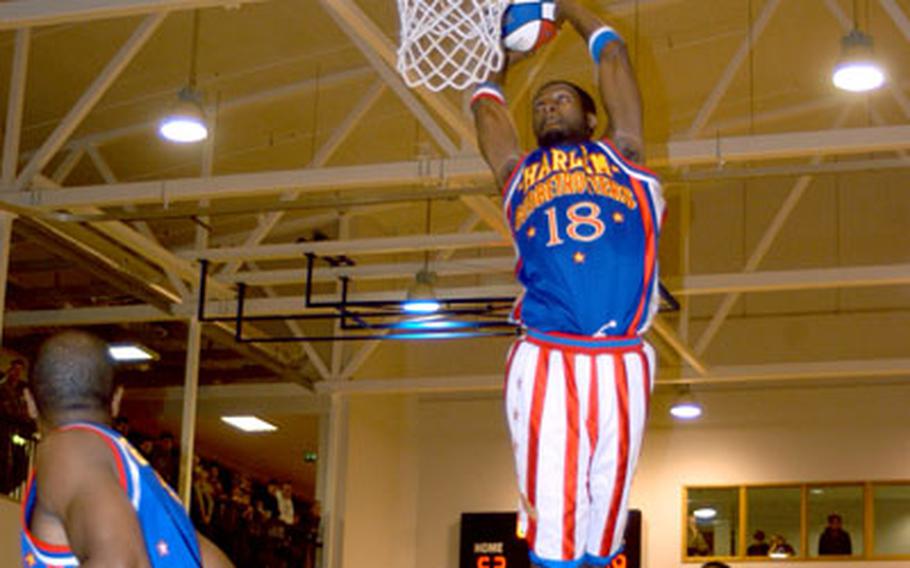 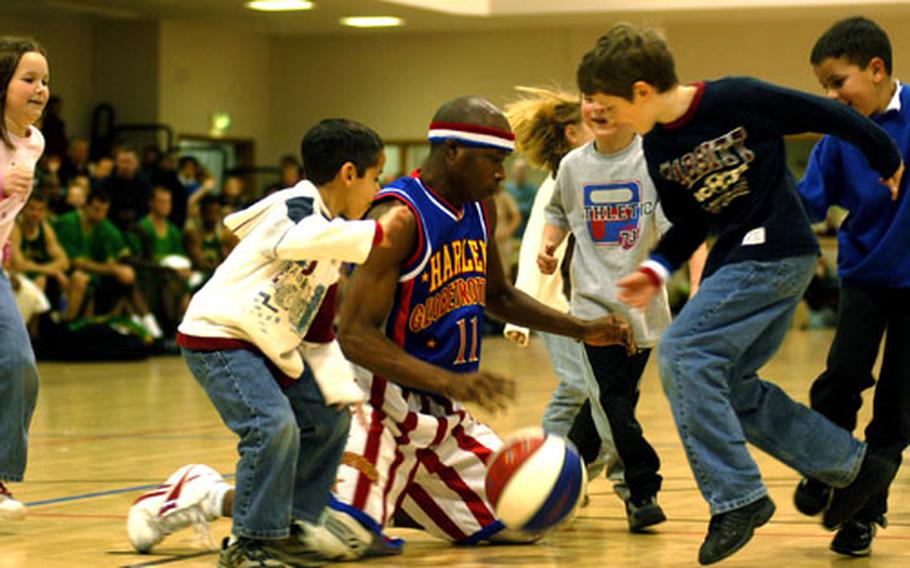 Harlem Globetrotter "Sweet Pea" Shine shows off his dribbling skills as kids try to steal the ball from him. (Sean Kimmons / S&S) 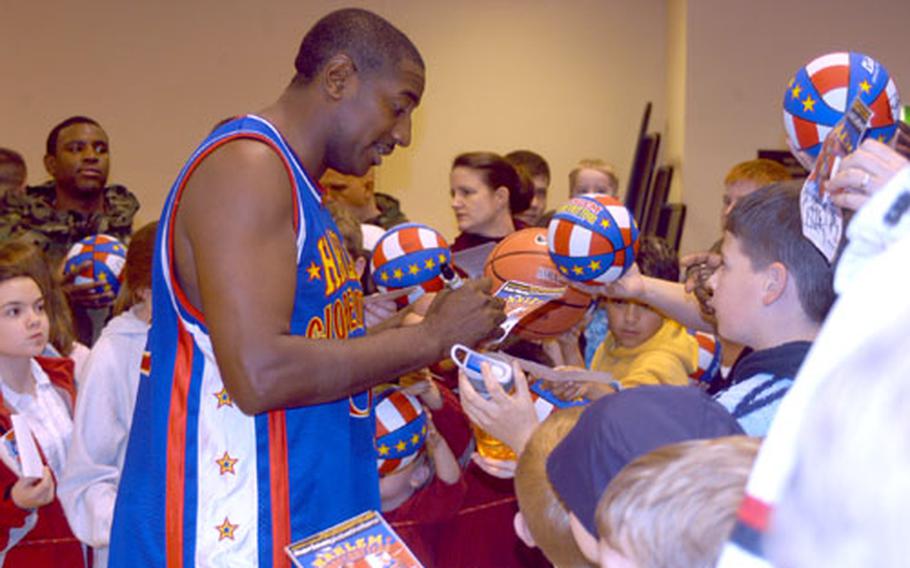 RAF MILDENHALL &#8212; The Hardstand Fitness Center pushed its fire code to the limits by cramming in more than 1,000 airmen and family members when it hosted basketball&#8217;s most famous showoffs last week.

The Harlem Globetrotters&#8217; two-hour show marked the end of the latest tour for the entertainers, who also traveled to U.S. bases in Belgium, Germany, Greece, Italy, Spain and Turkey.

A team of 10 Globetrotters amused the crowd at Mildenhall, many of whom were thrilled kids, as they played jokes on the referee and audience members, flaunted ball tricks and punished basketball hoops with monster dunks.

One of the Globetrotters selected from the team&#8217;s 24-player roster to go on the tour was &#8220;Flight Time&#8221; Lang. Before the game, he said that this was his third tour of U.S. bases but first time coming to Mildenhall.

Lang is familiar with the struggles that military troops go through. His father, an Army National Guard chaplain, has been deployed to Iraq at least two years and could be heading back within the next six months, he said.

Rodriquez was given the handle &#8220;Blenda&#8221; for once making two opponents fall on the ground when he confused them with his dribbling skills during a game. Although he may possess extraordinary basketball skills, he thinks troops are the unbelievable ones.

The Globetrotters may have squeezed past the unlucky Washington Generals by the score of 70-65; however, the game was more about entertaining than winning. There were numerous &#8220;time-outs&#8221; when the Globetrotters were let loose to go about their pranks and acts that sometimes involved the audience.

At one point, Globetrotter &#8220;Showtime&#8221; Gaffney invited Eli Gidlow, the 8-year-old son of an RAF Lakenheath officer, onto the court to make a basket. After a few attempts and some hazing from Showtime, Eli made the basket and received an autographed T-shirt for his troubles.

Her 9-year-old son, Joseph, thought the dribbling tricks of Globetrotter &#8220;Sweet Pea&#8221; Shine was the best part, while her daughter, Cali, 4, laughed when the Globetrotters sprayed water on audience members.