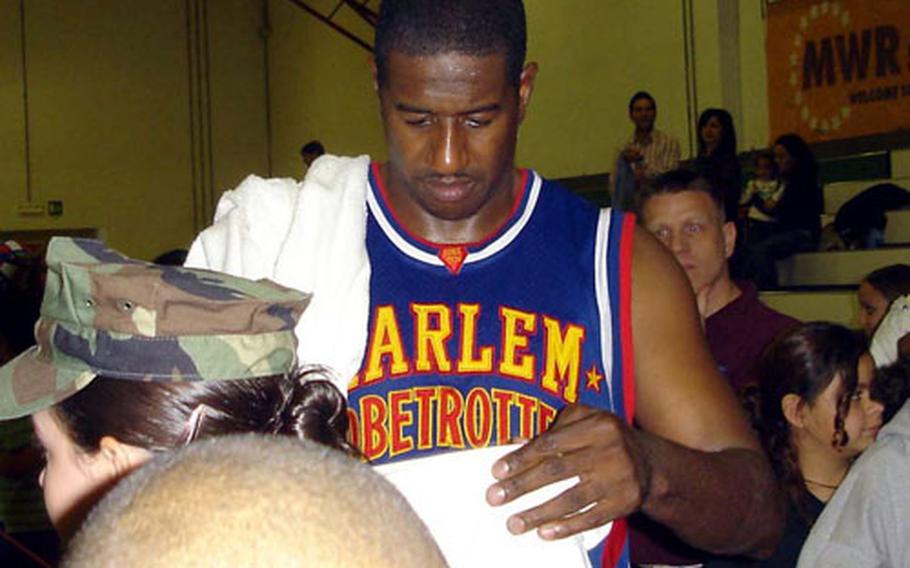 The Harlem Globetrotters are on a tour of military installations throughout Europe. Friday night they played for a packed auditorium at Naples High School on the U.S. Navy Support Site in Gricignano.

The team includes 25 of the most-skilled ballhandlers, passers and shooters not wearing NBA uniforms. They come from the collegiate ranks and range in age from 22 to 39.

&#8220;But what I enjoy most is interacting with the fans after the game, getting to talk to them and seeing how much they enjoyed the show.&#8221;

Teammate Herb &#8220;Flight Time&#8221; Lang agrees. Lang, who won the National Association of Basketball Coaches&#8217; Slam Dunk contest during the Final Four playoffs in San Antonio in 1998, said the team is really all about bringing professional, top-skilled players to audiences.

&#8220;Once you make the team, you still have to earn your spot. We want to make sure that when we take the floor, the audience will be thoroughly entertained,&#8221; he said.That&#8217;s a tradition that has been going on for a long time for the Globetrotters, now in their 83rd season.

&#8220;I bet you thought this started with Meadowlark Lemmon and Curley Neal,&#8221; Lang said, referring to the players featured in the television cartoon that aired during the 1970s.

While most of the crowd at the Naples gym may have never heard of those earlier players, they enjoyed watching the present lineup.Quamaine Holliman, a forward with the Naples High School basketball team, said he enjoyed the audience involvement&#8220;I&#8217;m liking it,&#8221; said the 18-year-old senior. &#8220;I like how they keep the crowd involved and put on a show for the little kids.&#8221;

The Globetrotters began thistour with a performance in Rota, Spain. They next go to Aviano and and Sigonella in Italy and then to Greece, Turkey, Germany, Belgium and Britain before returning to the States in mid-December.