Hardship differential restored for some but not all in S. Korea 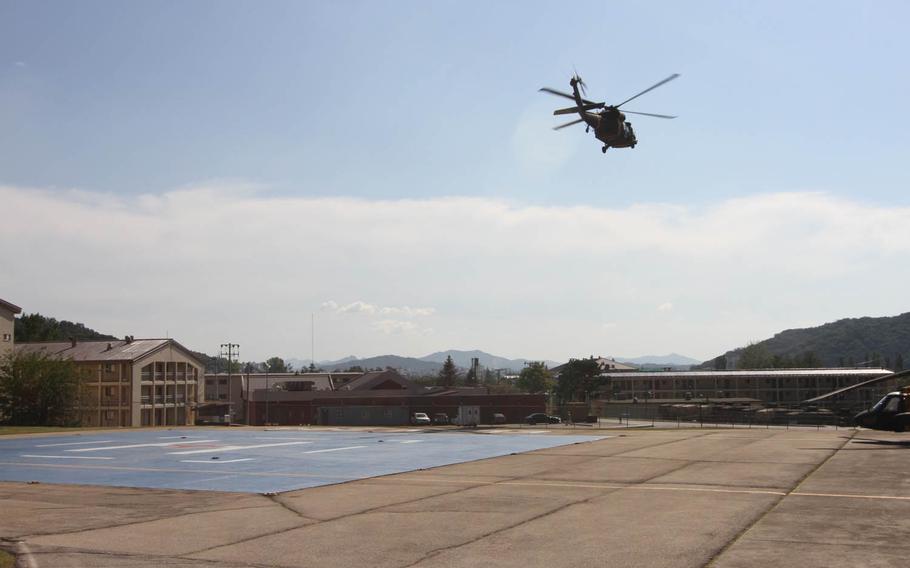 A UH-60 Black Hawk helicoptertakes off from a U.S. military base in South Korea in 2014. The U.S. has decided not to restore a 5 percent post hardship differential for civilian government employees at several major bases south of Seoul. (Jessica Meyer/U.S. Air Force)

SEOUL, South Korea — The U.S. has decided not to restore a 5 percent post hardship differential for civilian government employees at Camp Humphreys and several other major bases south of the capital.

It was the latest incident involving the additional pay received by civilian employees as a way to recruit and keep them in foreign countries that may be more dangerous or have a more expensive cost of living than the U.S. In 2014, the more widely disbursed post allowance was cut for about a month for all civilian employees, including those in Seoul.

The post hardship differential — which is distributed to staff facing extremely difficult or unhealthy conditions or physical hardship — was eliminated in April for areas outside the Seoul metropolitan area. It had been 5 percent of basic compensation for most locations outside Seoul for several years.

U.S. Forces Korea said at the time the decision would be reviewed based on new questionnaires used by the State Department to determine the differential.

Those living in the capital were not affected because they did not receive the differential. However, the bulk of U.S. forces in Korea is due to move to an expanded Camp Humphreys over the next few years.

The decision was largely based on reported difficulties in accessing medical care, lack of nearby educational facilities and isolation, it said.

The differential was due to reappear on eligible paychecks on July 14 but would not be retroactive.

Bob McElroy, a spokesman at the Humphreys garrison, said a working group had met a few months ago and filed paperwork to try to reverse the decision.

“We were disappointed that we didn’t get it back, but I guess we’ll try again the next time,” he said.

Vandal said he understood the disappointment among those who lost the differential.

“I remain concerned about the effect this will have on you and your families, as well as the ability of commands to recruit new employees from the U.S.,” he wrote, adding that new questionnaires would be submitted if living conditions change.

“All avenues will be explored as we seek to maintain a strong workforce,” he said.