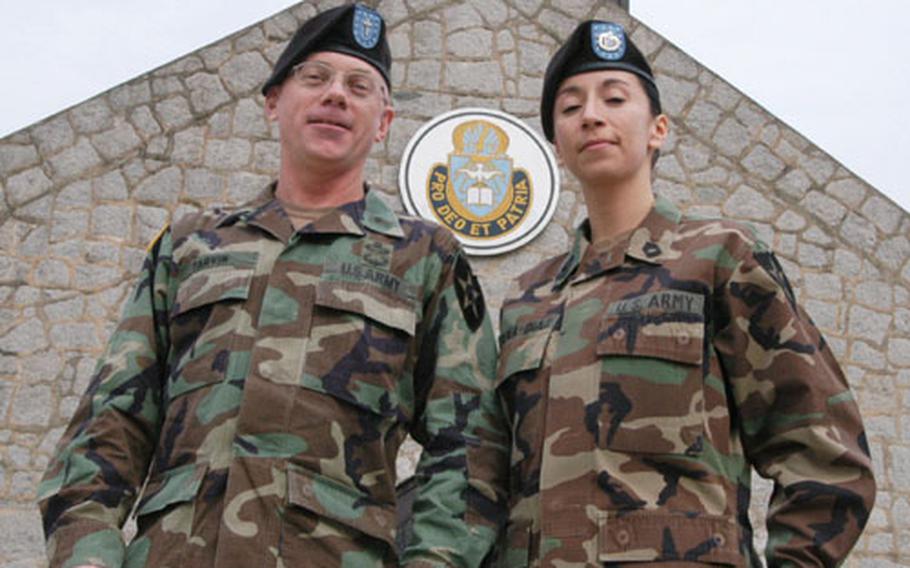 CAMP RED CLOUD, South Korea &#8212; The Islamic extremists waging war on America think they are going to heaven to make love to dozens of virgins after they die. Lt. Col. Mike Tarvin, the 2nd Infantry Division chaplain, believes they will burn in hell for their sins.

It&#8217;s a typically forthright statement from the chaplain who gave up preaching at the Christian Church of the Disciples of Christ in Hutchins, Texas, three years ago to serve his country in South Korea.

Tarvin&#8217;s sometimes uncompromising attitudes have gotten him in trouble with members of his church back in the United States, he said.

&#8220;There is probably a good percentage in my church who are very antiwar. They are pacifist to the point where they think that me being a chaplain in the Army is wrong,&#8221; he said. &#8220;To me, the military is an organization that its bottom-line purpose is to kill people. I think that is a justified use of deadly force.&#8221;

When Tarvin attends church conventions back home, he debates those sorts of issues with other members of the church.

However, freedom of religion brings responsibility, he added.

&#8220;There are people who are fundamentalist Muslims just like we have people who are fundamentalist Christians who may take that too far. Then, there is a higher authority to answer to if they use their religion for hate or violence,&#8221; he said. &#8220;God calls me to love people, but there are consequences to what you do as a person and I support those consequences.&#8221;

Despite his tough stance, Tarvin believes he has a duty to reach out to the terrorists and try to understand them. If they have a true change of heart, they might avoid hell, he said.

The primary focus of Tarvin&#8217;s sermons is teaching people to love God and their neighbors.

&#8220;That is the central focus of Christianity. If you only have one, then you are missing a major part. What I am called to do is to love those soldiers and figure out ways to make that clear,&#8221; he said.

There are 31 chaplains and 63 chaplain assistants under Tarvin&#8217;s command serving the division&#8217;s 15,000 soldiers. Each battalion has a chaplain, an assistant and a KATUSA assistant &#8212; a Korean augmentee to the U.S. Army, he said. There are more than 200 religious denominations recognized by the Defense Department.

While the 2nd ID chaplains are from many different denominations, they work together to make sure soldiers worship as they choose, Tarvin said.

&#8220;If a Catholic soldier wants to receive a Catholic rite, my obligation as a chaplain is to make sure that soldier or family member gets that. We do that with Jewish, Islamic, Hindu and other faiths&#8221; as well, he said.

The bulk of the chaplains&#8217; work involves counseling soldiers who are depressed, have marital and family issues, have separation issues, or who are simply having trouble coping with life, Tarvin said.

&#8220;Although we certainly don&#8217;t have a tidal wave, we are seeing an increase in soldiers coming back from Iraq with unresolved issues. They are trying to deal with stuff they did or saw and [some are] not sleeping,&#8221; he said.

Some soldiers are angry, he said, about coming off of deployment, being home for 90 days, and then coming to South Korea and being separated from their families again.

&#8220;We try to give alternatives for the soldiers. We have the coffee houses at a number of camps and we sit on the alcoholic discipline committee. One of our ideas was that maybe we should keep the gyms and bowling alleys open longer so the soldiers don&#8217;t go downtown and get blasted,&#8221; Tarvin said.

Chaplains try to educate soldiers about the risks of drinking, such as unprotected sex leading to pregnancy or sexually transmitted diseases, he said.

If Tarvin is Batman, Master Sgt. Chantel Sena-Diaz, the 2nd ID chaplain assistant, is his Robin.

Because chaplains are not allowed to bear arms, Sena-Diaz acts as Tarvin&#8217;s bodyguard. She also organizes the logistics of running the chaplaincy. Although they are not required to have a specific faith, chaplain assistants are an extension of the chaplaincy, she said.

&#8220;A lot of times the chaplains, because they are officers, soldiers may not say things to them that they talk to us about. We can be places the chaplains may not go. We get to see the soldiers when they are comfortable and doing what they really do without the chaplain being around,&#8221; said Sena-Diaz, who has a master&#8217;s degree in counseling.