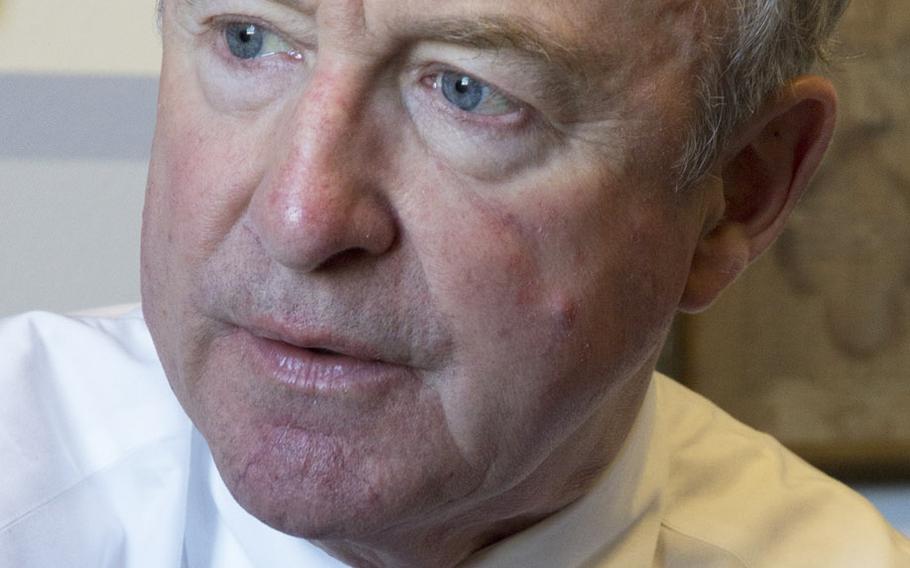 Rodney P. Frelinghuysen, R-N.J., in his office on Capitol Hill in December, 2013. (Joe Gromelski/Stars and Stripes)

Rodney P. Frelinghuysen, R-N.J., in his office on Capitol Hill in December, 2013. (Joe Gromelski/Stars and Stripes) 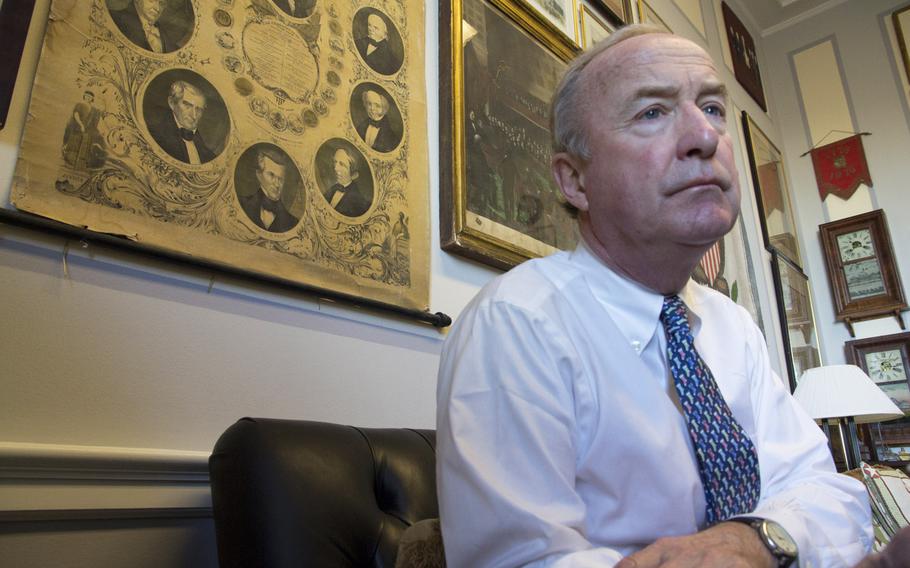 Rodney P. Frelinghuysen, R-N.J., sits in his office on Capitol Hill, amid reminders of his family's long history of public service, in December, 2013. (Joe Gromelski/Stars and Stripes)

WASHINGTON — The man at the center of the new defense spending bill never intended to be there. But the death of an iconic congressman left open a coveted spot in the Capitol Hill hierarchy.

After 18 years in Congress, Rodney Frelinghuysen has taken on the chairmanship of the powerful House Defense Appropriations Subcommittee, the purse strings of the Defense Department.

“The circumstances of this are not the circumstances one would choose,” Frelinghuysen said, referring to the October death of Rep. Bill Young, the 40-year Florida congressman who led the panel for years and received two consecutive chairmanship term-limit waivers.

But lawmaking runs in Frelinghuysen’s blood — since 1793, six members of his family have been elected to serve. He has never won an election with less than 59 percent of the vote. And his election lock on his 11th district seat in New Jersey is so solid that political activist and filmmaker Michael Moore ran a ficus tree against him in protest in 2000, noting that “we think it’s time to point out to the Frelinghuysen family that we live in a democracy, not a dynasty.”

He takes the reins of the defense spending subcommittee at a time when the Pentagon is reeling from sequestration and coping with the drawdown from wars in Iraq and Afghanistan. Pay and benefits are in the cross hairs of many members of Congress, and the federal budget deal approved in December trimmed cost-of-living adjustments for younger military retirees, causing backlash from veterans advocates.

A former chairman of the New Jersey General Assembly Appropriations Committee, Frelinghuysen correctly notes that the Joint Chiefs of Staff suggested the changes to congressional committees. But he aligned himself with House Armed Services Committee Chairman Buck McKeon, R-Calif., in saying that he wants to preserve as much pay and benefits as possible, even at a time of mounting fiscal pressure in Congress.

Frelinghuysen said he will work with McKeon’s committee and use the Pentagon’s recommendations to thread the needle.

“We have to recognize that many of those who are in the military today ... have made multiple deployments to the Middle East — in cases, five or six,” he said. “We’re going to be very careful in looking at the whole benefit issue ... There will be hard decisions.”

Frelinghuysen, 67, is shy on details about how he intends to use his new chairmanship, saying he first wants to hold hearings with the top service chiefs. He says he wants to root out waste and abuse, and to ask the military how it plans to do more with less, but won’t give specifics until after those hearings, which he intends to hold in the coming weeks and months.

“We live in a different fiscal environment, with declining fiscal budgets, and the subcommittee over the years hasn’t really been working with declining budgets,” he said. “I’ve been on the committee through our time in Iraq, and as we draw down in Afghanistan there’s going to be a decline in military expenditures for the Department of Defense. So it’s important that we make every dollar count.”

He plans to address waste and fraud, he said, but declined to detail programs or projects he would target. The subcommittee plans to fully fund the DOD inspector general’s office, “in lock step” with the White House, he said. “We’re going to look at all defense expenditures. ... We want to know where there are problems.”

Frelinghuysen says he used his new chairmanship to help craft the spending bill for 2014. The $1.1 trillion bill, unveiled Jan. 13 and passed by Congress three days later, will fund the government through September.

Frelinghuysen cites military readiness as his top priority and wants to ensure “predictability” in the Pentagon’s budgeting.

“I say this respectfully: Armed Services sets the policy, but when it comes down to it, our committee has a responsibility for a strong national defense,” he said. “There’s more action and responsibility in those who pay the bills.”

“Those who have served deserve the best medical care in the system,” said Frelinghuysen, a Vietnam vet. “So this is a lifetime commitment on my part.”

The most common criticism of Frelinghuysen is that he is a career politician, riding on his family’s long political coattails and sitting entrenched in office. The closest he came to being unseated came in 2012, when Democrat John Arvanites won 40 percent of the vote and independent candidate Barry Berlin got 1 percent. For his part, Berlin declared it a victory.

“The vote total shows that there are many people in the 11th district who agree that the current Congress (and most likely the new Congress) are not working to reach compromises that benefit the country,” Berlin posted online after the election.

Frelinghuysen argues that his heritage is a strength, not a liability.

“I don’t regard coming from a political family to be detrimental in any way,” he said. “There’s sort of a feeling certainly among my constituents and the men and women I serve with that my sole focus is to be a responsible, accountable member of Congress. ... I’m mindful of my heritage, but this is today and I’m focused on tomorrow.”

Arvanites attacked the New Jersey Republican in 2012, labeling him a far-right incumbent with a tea-party style voting record. The Washington Post congressional voter database says he voted with the GOP 90 percent of the time.

Yet Frelinghuysen shrugged off the criticism and won the race. He maintains relatively moderate voting record, with some tilts toward the right in the past several years. Once considered a pro-choice congressman, he now has only a 7 percent rating from the National Abortion Rights Action League; he is a member of the Republicans for Environmental Protection caucus despite owning the third-highest amount of oil stocks among the 435 House members and a League of Conservation ranking of 11 out of the 13 members of representatives from New Jersey. Of the 123 bills he has introduced since 1995, the four that became law were two water-power programs, a highlands conservation act and a District of Columbia appropriations act.

A prolific ear-marker during the years when the practice was supported by congressional Republicans, most of Frelinghuysen’s earmarks were for defense-related spending. Likewise, the bulk of his campaign contributions have come from the same sector — in 2012, seven of his top 10 campaign donors were related to the defense industry.

Drafted into the Army during the Vietnam War, Frelinghuysen served in the Mekong Delta with the 93rd Engineer Battalion, which was tasked with road-building. He received two honors from the military — the Vietnam Service Medal and the Navy’s Distinguished Public Service Award, the branch’s highest civilian honor, in 2013.

When Frelinghuysen is working in the district, he lives in Georgetown. His home, with his wife, Virginia, is Harding Township, N.J.

Few in Congress know Frelinghuysen as well as Frank LoBiondo, who was elected to Congress alongside him in 1994. The two men served in the New Jersey General Assembly for years before coming to Washington.

“There are very few people that I have seen who are as eminently qualified as Rodney,” said LoBiondo, who lives in Atlantic County, N.J. “There’s an incredible amount of preparation time that has to be spent, one on one, with people who are involved, whether they be Pentagon or military-type people, that he has to listen to. There’s an enormous amount that he has to read. There’s an enormous amount to research. And that’s all in addition to representing your district ... He eats it. He sleeps it. He’s just about 24/7.”