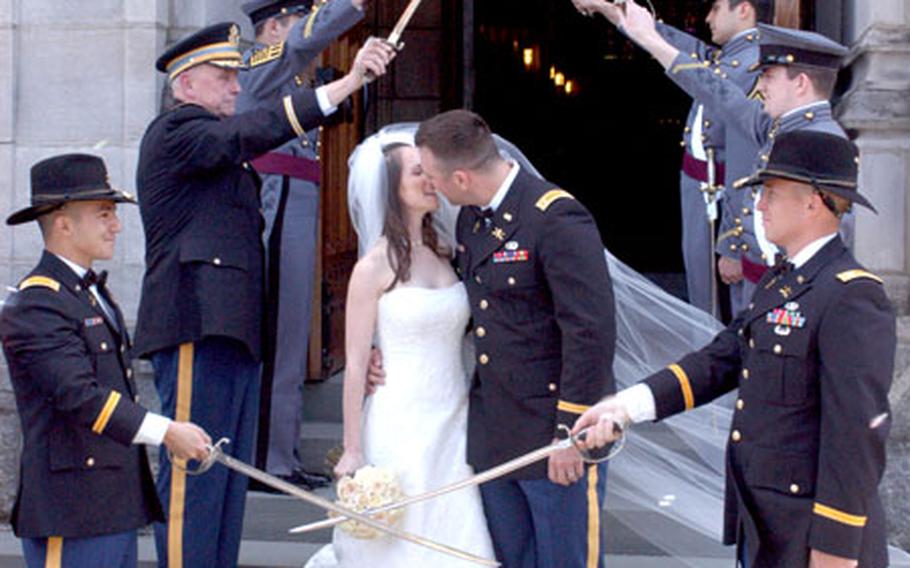 First Lt. Derek Ping and wife Jamie kiss outside of a chapel at West Point following their religious wedding ceremony April 8. They received their civil marriage certificate five months earlier, thanks to a Montana law that allows couples to be married without appearing in person. (Courtesy of Roger Leo)

The couple&#8217;s double-proxy marriage &#8212; a legal ceremony requiring neither party to be present &#8212; is among about 30 weddings organized by S&B Inc, nearly all military.

While several states allow a stand-in to say the vows for one spouse, the completely absentee nuptials are an option only in Montana; the union is recognized by all 50 states and the U.S. military.

The Pings, who live in Waco, Texas, had to fill out several identification forms and submit notarized statements of their sworn love before they received a marriage certificate in the mail. But for the couple, it was the only way to tie the knot while he was deployed in Iraq.

After several soldiers in his unit were killed last November, Lt. Ping, of the 1st Cavalry Division at Fort Hood, worried about his 22-year-old fiancee&#8217;s future if he were injured or killed before they were married. The pair had been planning a traditional ceremony for months before his deployment in April 2003.

S&B Inc. owners Sam and Barbara Geller said that&#8217;s exactly the scenario they were thinking about when they launched their business in early 2004.

Most of their clients had their dream weddings pushed back because of military deployment, and are anxious for the legal recognition even if the traditional walk down the aisle is still months away.

&#8220;We helped one couple where the groom was on the USS Kitty Hawk, and the bride was stationed in Singapore,&#8221; Sam Geller said.

Barbara Geller said they encourage all clients still to have a religious ceremony later on, to give family and friends a chance to celebrate with the newlyweds.

For the Pings, that service was held at West Point on April 8, about a month after Derek&#8217;s tour in Iraq ended. Jamie said while the legal marriage was a relief, the religious ceremony was their real wedding.

Barbara Geller said she was inspired to start the business after learning about Montana&#8217;s laws, and remembering uncles who had their weddings delayed by deployment to Korea.

The process usually takes about three weeks and costs $900. Sam Geller said couples do have to prove their identity and personally sign all the forms, but described the process as fairly simple.