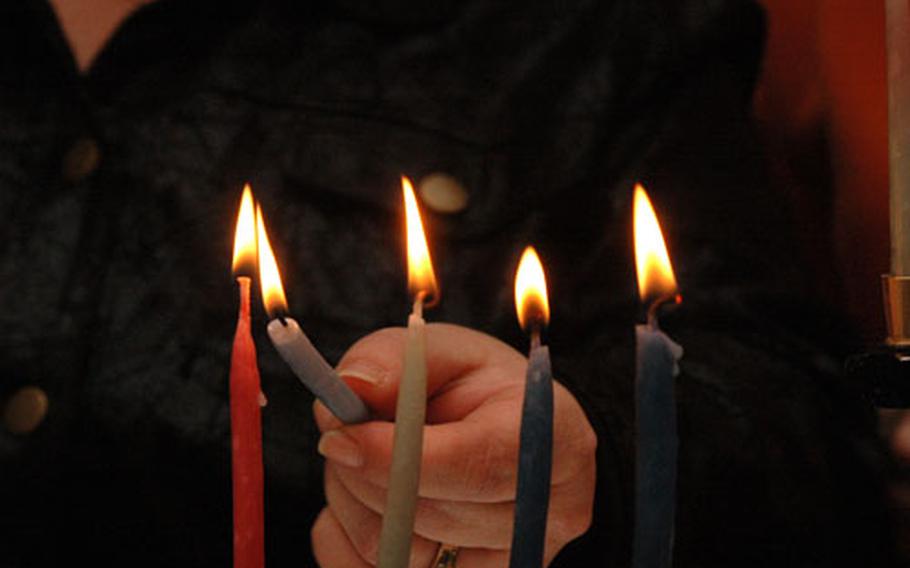 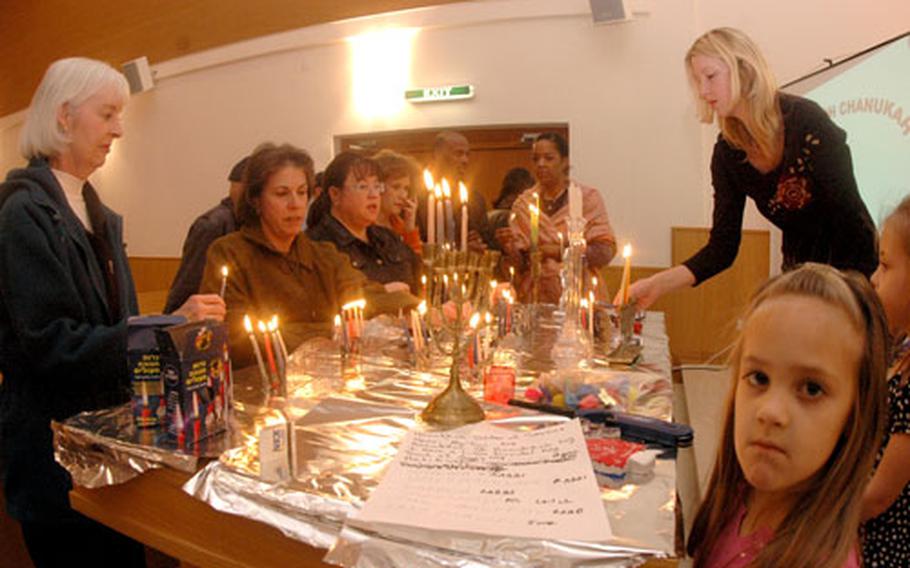 About 50 people gathered Friday to celebrate the Jewish observance of Hanukkah, each taking part in the lighting of the candles of a menorah. () 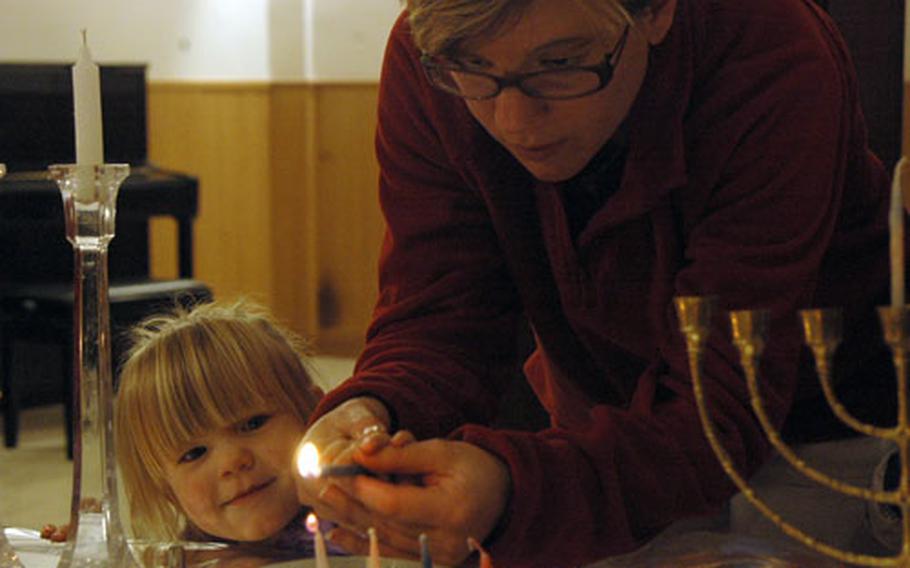 Naomie Cohn, 2, lights the fourth night’s menorah candle with help from her mother, Deborah, during a Hanukkah observance Friday night at the Naval Support Activity site chapel in Gricignano. () 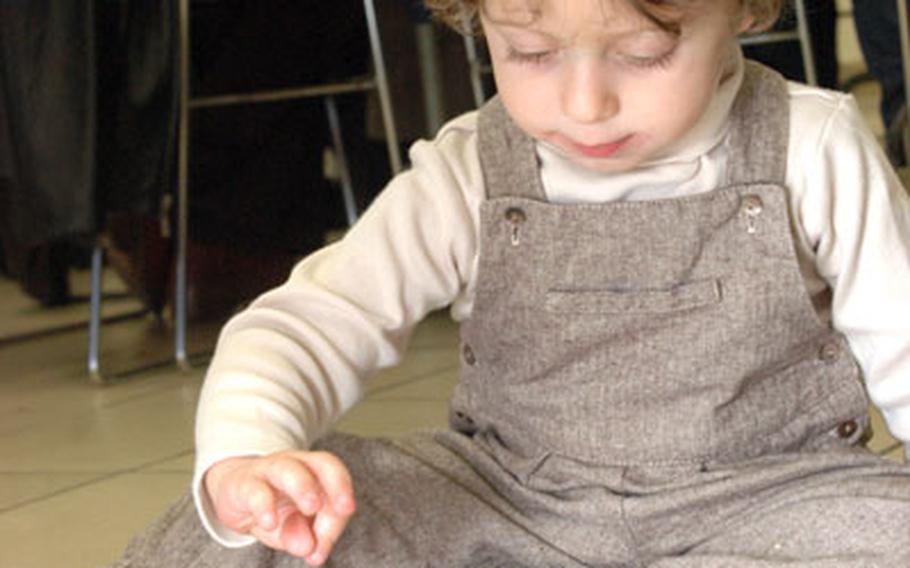 Ari van Frank, 2, tries to spin a dreidel, a four-sided top inscribed with Hebrew letters, played during Hanukkah. Players usually play for candy or coins by spinning the dreidel. () 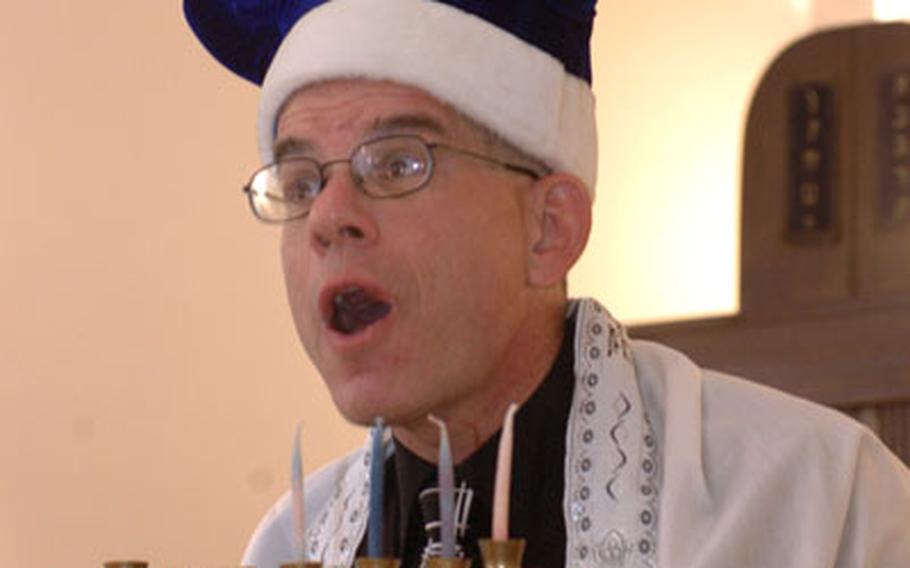 Rabbi (Lt. Cmdr.) Seth Phillips, donning a felt menorah cap, holds a seven-candle menorah, used by the Jewish community before the recapturing of the Jewish Temple by the Maccabees in 165 B.C. ()

Friday night, the Protestant minister attended the Hanukkah observance at the chapel on Naples&#8217; Naval Support Activity site in Gricignano to join the ceremonies marking the Jewish holiday.

&#8220;I think we all believe in ecumenical ministries &#8230; and supporting all faiths, all those that profess a belief in God,&#8221; said Harris, a civilian who conducts chapel services on base.

&#8220;I loved [the Hanukkah observance.] It was very educational, very encouraging, very uplifting. It&#8217;s good to see different faiths gather as one to support the celebration of Hanukkah.&#8221;

Rabbi (Lt. Cmdr.) Seth Phillips delivered a spirited lesson Friday to the roughly 50 Naples community residents &#8212; Jewish and non-Jewish &#8212; who attended the fourth night of the eight-day Festival of Lights commemorating the rededication of the Temple of Jerusalem by the Maccabees. This year, the celebration began at sundown Tuesday.

The celebration &#8220;brings lights to the world, to light the darkness, with courage and faith,&#8221; Phillips said.

The nightly celebration ordinarily takes place in homes, and doesn&#8217;t require a rabbi to lead the lighting of the candles, he said.

But several families gathered Friday at the support site chapel to light the candles on the table full of menorahs.

After singing, dancing and lighting the candles, participants moved to the fellowship hall to partake of traditional Jewish fare &#8212; a &#8220;high cholesterol&#8221; menu, Phillips joked, that expresses special significance.

Some foods traditionally are deep-fried, such as potato latkes and doughnuts, which commemorate the miraculous burning of oil at the temple. There was enough oil to burn for one night, but the candles &#8212; back then a wick in olive oil &#8212; burned for eight consecutive nights.

The holiday commemorates the rededication of the Temple of Jerusalem, which had fallen into enemy hands in 168 B.C. Three years later, Jerusalem was recaptured by the Maccabees from the Greeks, and the temple restored to the Jewish people.