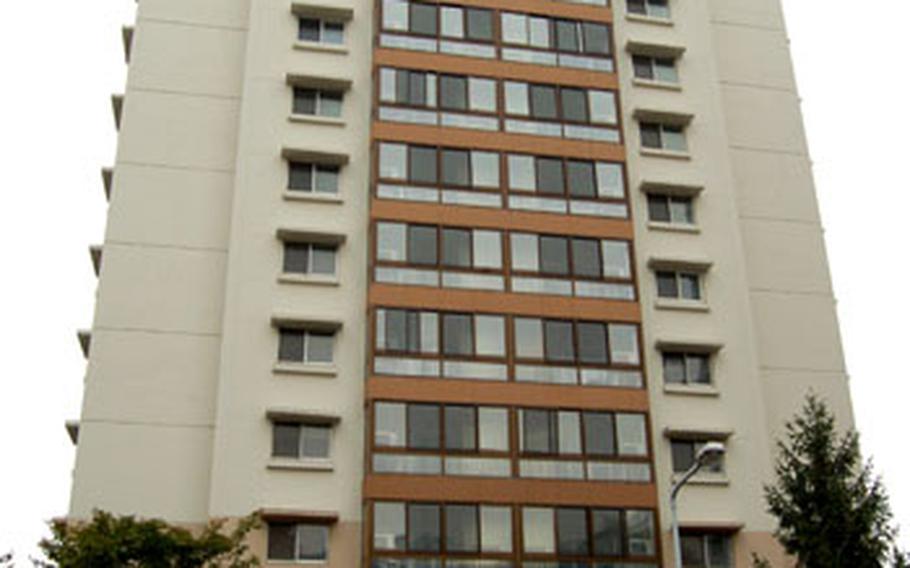 This U.S. military housing tower on Hannam Village in Seoul has remained vacant since military officials said the housing is not up to U.S. Army standards. (Jimmy Norris / S&S)

And if the Korean National Housing Corp. brings the towers back to acceptable standards, the military will once again start paying the lease and allow soldiers to live there.

The project is expected to open up to 260 apartments in the satellite housing area for nearby Yongsan Garrison, headquarters for U.S. Forces Korea.

IMCOM leases Hannam housing from the corporations, which will pay for the renovations.

The three towers have remained empty since the U.S. military &#8212; upset with the poor quality of the 28-year-old buildings &#8212; moved out residents and stopped paying the $4.5 million yearly lease in August 2006.

The corporation was notified at the time that &#8220;conditions deteriorated to a level &#8230; that was unacceptable and did not meet our standards,&#8221; said IMCOM spokesman Ed Johnson.

The U.S. military told the housing corporation that if it completed a massive renovation project, including replacing water and sewage pipes and converting two-bedroom apartments to bigger three-bedroom units, &#8220;we would then allow the soldiers to reoccupy&#8221; the housing, said Paul Cramer, chief of public works for IMCOM-Korea, during a recent phone interview.

Corporation officials have declined to be interviewed for this story, and IMCOM said it doesn&#8217;t know how much the project will cost the housing corporation. &#8220;We did not ask; they did not offer,&#8221; Cramer said.

The corporation brought various renovation proposals to the table with &#8220;what they thought were solutions that we would accept,&#8221; he said, but it wasn&#8217;t until September that an agreement on the project was reached.

Cramer said there are no &#8220;major issues&#8221; with the sole occupied tower on the compound, even though it was built at the same as the others.

He said the corporation expects to complete the renovations in 15 to 18 months, in the spring of 2010.

Hannam Village is one of the U.S. installations scheduled to close when the military relocates to Camp Humphreys in coming years. The target date to close the bases is 2012, but there is speculation that funding issues could cause delays.

Cramer said the corporation was reluctant to put money into buildings set to close soon. He said IMCOM responded there was no guarantee how long the military would lease the towers and that &#8220;like any investment, there are risks.&#8221;

IMCOM officials added that anyone who experiences problems with family housing in South Korea should contact their chain of command.