Chief Warrant Officer 2 Brad Harris, officer in charge of the Personnel Retrieval and Processing Company (Forward), a new name for Mortuary Affairs, stands in the room where his Marines process the bodies of troops who die in western Iraq. (Sandra Jontz / S&S)

Chief Warrant Officer 2 Brad Harris, officer in charge of the Personnel Retrieval and Processing Company (Forward), a new name for Mortuary Affairs, stands in the room where his Marines process the bodies of troops who die in western Iraq. (Sandra Jontz / S&S) A painting in the processing room of the Mortuary Affairs company at al Asad Air Base, Iraq, reminds the Marines of the solemnity of their work, they said. (Sandra Jontz / S&S) 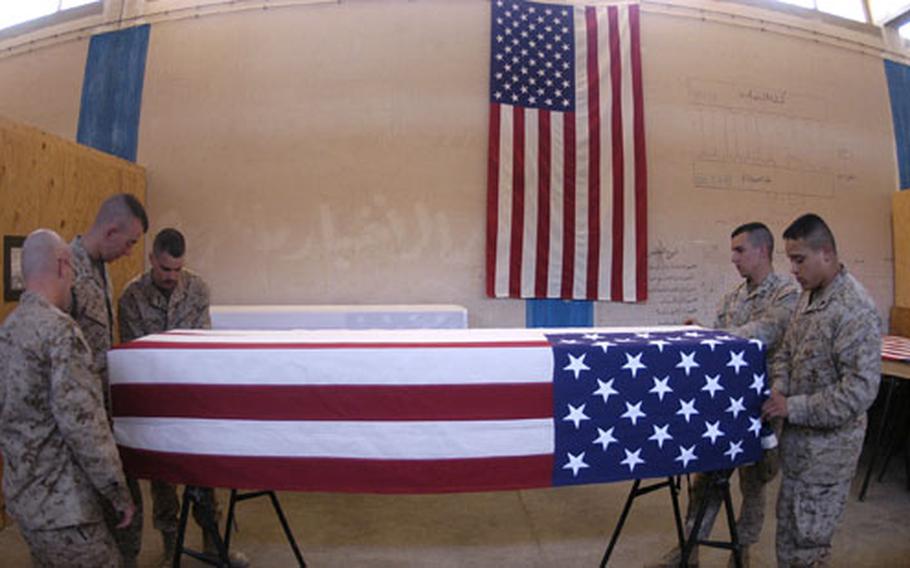 AL ASAD AIR BASE, Iraq &#8212; In their civilian lives, they are a driver for United Parcel Service seeking a promotion to supervisor, a restaurant manager, a welder, a kid who works in a lumber yard and college students working toward degrees in psychology and English.

In their military lives as Marine Corps reservists, they are mortarmen and riflemen, infantry Marines and communications specialists. But none is here in Iraq serving in their military occupational specialties.

The Marines of Retrieval and Processing Company (Forward), the new name for Mortuary Affairs, are all volunteers who not only wanted to serve in Iraq, but to do so in the oft-ostracizing realm of mortuary affairs.

The Corps has no active-duty force of Mortuary Affairs specialists, so the service pulls from the Reserve ranks to perform the job of processing the remains of dead servicemembers from the combat zone.

&#8220;If someone has given the ultimate sacrifice, it is our honor to ensure that we get back to the families their loved one, every part, every bit,&#8221; said Chief Warrant Officer 2 Brad Harris, the company&#8217;s officer-in-charge. &#8220;We won&#8217;t let it get like World War II, when families did not get remains. &#8230; There are still people from Vietnam who never received anything back. We won&#8217;t let that happen here.

The hardest part of the job for Cpl. Sergio Rosas, 23, is going through the personal effects found on bodies brought into the converted vehicle maintenance bays at Al Asad.

They record every nuance, every fine distinction of the remains. From grisly details &#8212; which many said doesn&#8217;t bother them &#8212; to an inventory of personal belongings: the wedding bands, the photo collections of wife and kids, the letters.

Rosas has had to read some of those letters. He recalls one from a Marine who wrote his girlfriend that he planned to propose marriage upon his return. Another was from a wife announcing the couple&#8217;s new baby was a boy and that she couldn&#8217;t wait for the new father to see him for the first time.

They work to ensure the dead troops are properly prepared for transport to Dover, Del., where the military conducts autopsies and definitive identifications.

The biggest misconception of Mortuary Affairs, Harris said, is that people tend to think the Marines perform autopsies and embalm the bodies. &#8220;Everything we do is geared toward evidence gathering and preservation,&#8221; he said.

It&#8217;s a tedious job that requires keen precision &#8212; from the collection of remains and personal effects from the field to the exact folding of the American flags that drape the transfer cases for the final flight back home.

The Marines in western Iraq each have gone through the seven-week preparatory training to do their jobs, training which Lance Cpl. Jeremy Holder, 21, likened to techniques used on the television show &#8220;CSI.&#8221;

&#8220;We learned how to do fingerprinting, match dental records and learned medical terms for body parts and wounds,&#8221; said Holder, a data systems communicator in the Reserves and front-of-house manager for Flat Rock restaurant in Asheville, N.C.

But Mortuary Affairs doesn&#8217;t deal solely with troops. They process anyone who dies on a U.S. base or is brought onto the camp &#8212; to include Iraqi soldiers, policemen and civilians.

And with the opening of a Level III trauma hospital in Al Asad, they mentally are preparing themselves for the possibility of having to deal with dead children, said Staff Sgt. Marcelino Marquez, 33.

For the most part, all they have is each other in this combat zone.

It makes it harder to deal with if you are friends with the victim on your processing table.