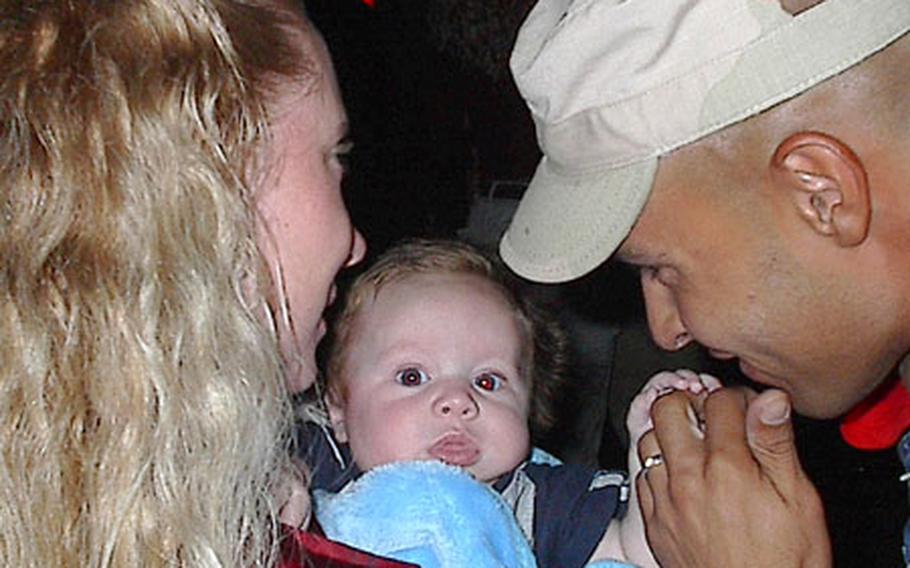 Staff Sgt. Felipe Pinero gets a warm welcome early Friday morning as his unit returns to Hanau, Germany, from the war in Iraq. Pinero&#39;s unit, the 71st Ordnance Company, 18th Corps Support Battalion, was deployed to Kuwait and later to Iraq. (Courtesy of U.S. Army)

Troops from the 71st Ordnance Company, 485th Corps Support Battalion, out of Hanau, Germany, began their trip home with a long wait at the airport in Kuwait City.

After a half-day aircraft delay, 79 soldiers of the original 88 redeploying troops were finally reunited with friends and family at 1 a.m. Friday.

The other nine soldiers stayed behind to travel on an Air Force space-available flight, according to Dennis Johnson, a 414th Base Support Battalion Public Affairs reporter.

About 50 family members, friends and soldiers gathered at Hutier Casern around midnight to welcome home the troops from their nearly six-month deployment.

The 71st Ordnance Company left for deployment in March. First the unit was sent to Kuwait, then to Logistical Support Area Bushmaster, about 150 miles south of Baghdad, and finally to LSA Anaconda in Balad, about 50 miles north of Baghdad.

There are 129 soldiers assigned to the 71st Ordnance Company. Capt. Kevin Nix, company commander, told Johnson that the remaining members of the company had either come home early to move to a new installation or to process out of the Army.

There are currently 11 soldiers still deployed from the unit and attached to the 1-27th Field Artillery in Iraq. Johnson reported that the 11 soldiers might remain deployed until March 4, a year to the date they originally deployed.

Nearly 4,000 3rd COSCOM soldiers are currently deployed, according to Maj. Scott Slaten, 3rd COSCOM spokesman. Also, there are 17,000 soldiers from around the globe assigned to 3rd COSCOM downrange and an additional 16,000 support personnel assigned to run the LSA Anaconda, the largest logistical area in Iraq.