Hanau students prove Mozart's sound is never out of style 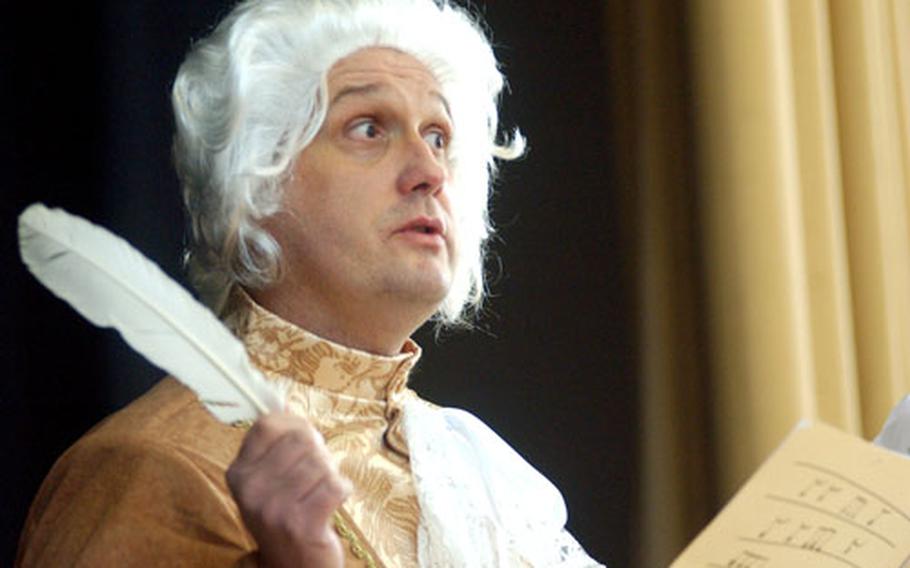 Wolfgang Amadeus Mozart, aka David Puckett, announces the next musical number at the Argonner Elementary School&#39;s Mozart Festival at the Hanau, Germany school on Thursday. Mozart would have been 250 on Friday. (Michael Abrams / S&S)

Wolfgang Amadeus Mozart, aka David Puckett, announces the next musical number at the Argonner Elementary School&#39;s Mozart Festival at the Hanau, Germany school on Thursday. Mozart would have been 250 on Friday. (Michael Abrams / S&S) Ester Tran, 10, a fourth-grader at Argonner Elementary School in Hanau, Germany, plays a Mozart minuet for her fellow students at the school&#39;s Mozart Festival on Thursday. (Michael Abrams / S&S) 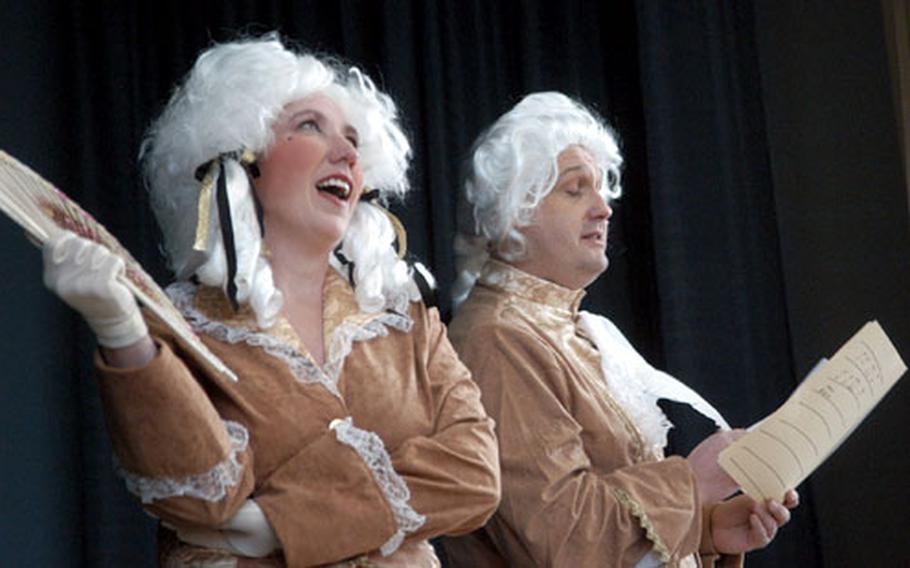 HANAU, Germany &#8212; OK, the setting may not have been as captivating as the old Burgtheater in Vienna, Austria, but the music of Wolfgang Amadeus Mozart still resonates, no matter where or when it&#8217;s played.

On the eve of Mozart&#8217;s 250th birthday, Fallon and nearly 400 other pupils attended a school tribute to the Austrian composer, regarded as one of the greatest musical minds of all time.

In addition to piano performances by fourth-graders Kaitlyn Biddulph and Esther Tran, the children were treated to a special appearance by Mozart himself. Actually, it was David Puckett, a speech teacher, in wig and 18th-century attire. He was joined in costume by teacher Tanya Chambers, who played Mozart&#8217;s sister, Nannerl.

&#8220;Though tastes may differ, music lovers must admit that Mozart&#8217;s music has become quite a hit,&#8221; Chambers said as she fanned herself on stage.

She and Puckett anchored the 35-minute program from atop the stage in the school&#8217;s multipurpose room. Between the teachers&#8217; whimsical and rhyming banter, several of Mozart&#8217;s pieces were played for the benefit of the children, who sat on the floor and listened as intently as they could, given it was the end of the school day.

The legendary composer&#8217;s 250th birthday is being recognized Friday the world over, and some observances, such as those in Vienna and Salzburg, Austria, run the entire year.

Thanks to words penned by teacher Gisela Olbrich, the Argonner pupils ended Thursday&#8217;s tribute with a special ode to Mozart.