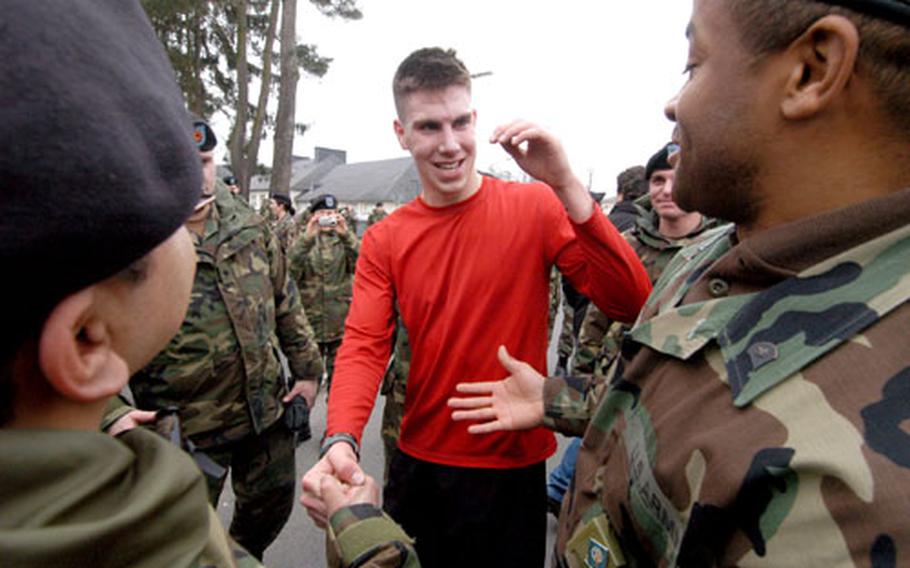 Spc. Jacob Truex is congratulated by friends and fellow GIs after he set a new record Tuesday in the five-kilometer backpack run at Fliegerhorst Casern in Hanau, Germany. Truex’s five-kilometer was 22 minutes, 20 seconds; he missed the mile record by about 10 seconds. (Michael Abrams / S&S)

Spc. Jacob Truex is congratulated by friends and fellow GIs after he set a new record Tuesday in the five-kilometer backpack run at Fliegerhorst Casern in Hanau, Germany. Truex’s five-kilometer was 22 minutes, 20 seconds; he missed the mile record by about 10 seconds. (Michael Abrams / S&S) Spc. Jacob Truex, carrying a 40-pound backpack, is cheered by fellow soldiers Tuesday as he attempts to set the Guinness World Record in the one-mile and five-kilometer backpack runs at Fliegerhorst Casern in Hanau, Germany. (Michael Abrams / S&S)

HANAU, Germany &#8212; Scores of soldiers crowded around Spc. Jacob Truex, forming a sort of horseshoe around the winded warrior.

As the 20-year-old struggled to catch his breath, Sgt. James McCabe made a bold pronouncement, sounding for all the world like a stage promoter.

And that just about says it all.

Truex laid claim Tuesday to setting a world record for running the fastest five kilometers (about three miles), while saddled with a 40-pound pack. He ran the distance in 22 minutes, 20 seconds &#8212; give or take a few seconds &#8212; besting the old record by nearly three minutes.

The Oregon native had hoped to also eclipse the speed record for one mile, but fell short by about 10 seconds.

For the record, his backpack contained 20 pounds of rice, a 7-pound sleeping bag and an assortment of barbell plates that added up to the final 13 pounds.

While the five-kilometer feat was witnessed by roughly 100 people, there is an established protocol that Truex must follow to make it into the Guinness Book of World Records. There are forms to fill out and witness statements to collect.

In addition, McCabe, who is Truex&#8217;s supervisor at the 127th Aviation Support Battalion, videotaped the entire run, as well as the preceding weigh-in. That footage is important because it documents for the reviewers in England an uninterrupted sequence of events, from the formal weigh-in and the run itself to the sprint to the finish line.

Tuesday&#8217;s turnout was a testament to Truex. Contemporaries and senior leaders more than twice his age spoke well of the vehicle mechanic and Iraqi war veteran.

Truex is separating from the military this spring and plans to train full time for triathlons. He has his eye on at least another record or two, but it&#8217;s not about getting attention. The guy just likes a good challenge.

Apropos for Valentine&#8217;s Day, Truex dedicated his record run to his mother, Susie.