Hanau graduation ends it all 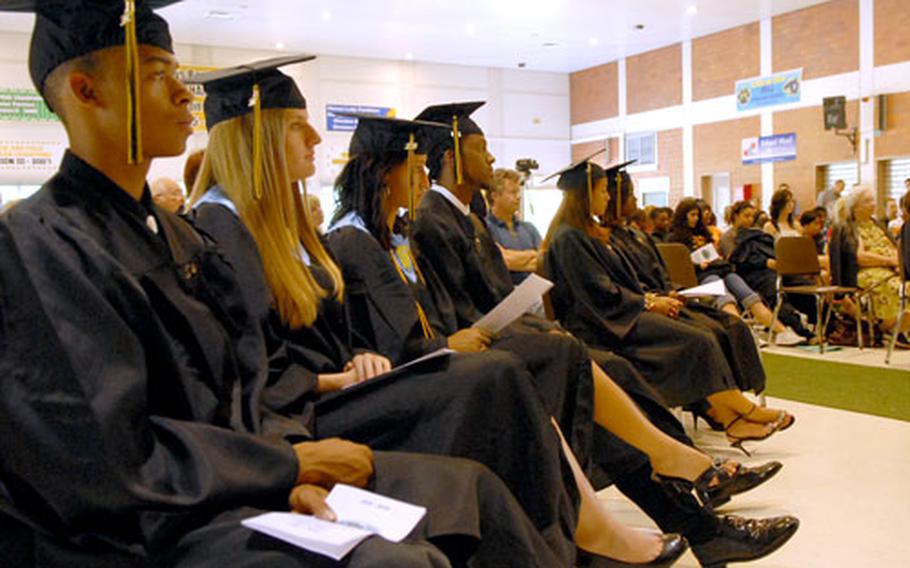 Members of the final senior class at Hanau High School listen to a speech by the first principal of the school, Tom Ellinger. With the drawdown of the Hanau Army garrison, the school is closing after 33 years. (Michael Abrams / S&S)

Members of the final senior class at Hanau High School listen to a speech by the first principal of the school, Tom Ellinger. With the drawdown of the Hanau Army garrison, the school is closing after 33 years. (Michael Abrams / S&S) 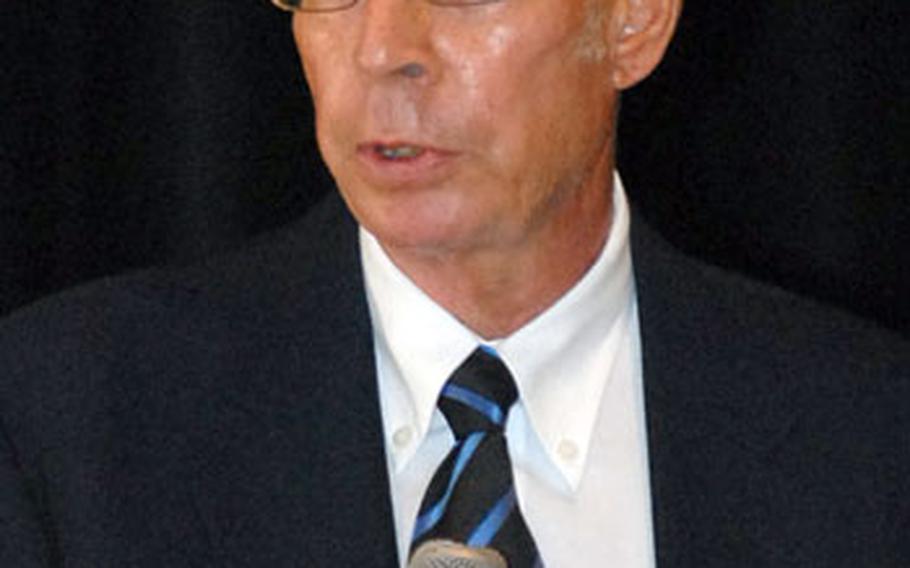 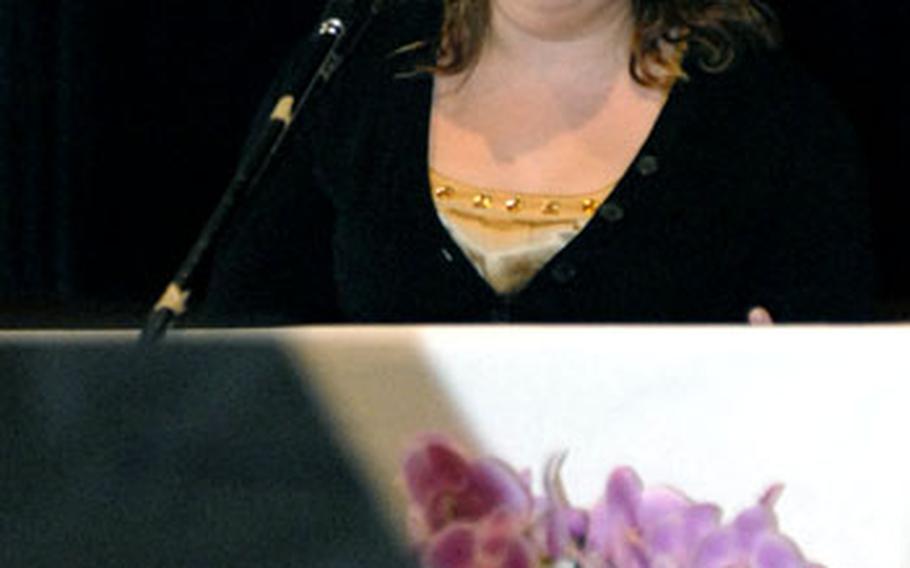 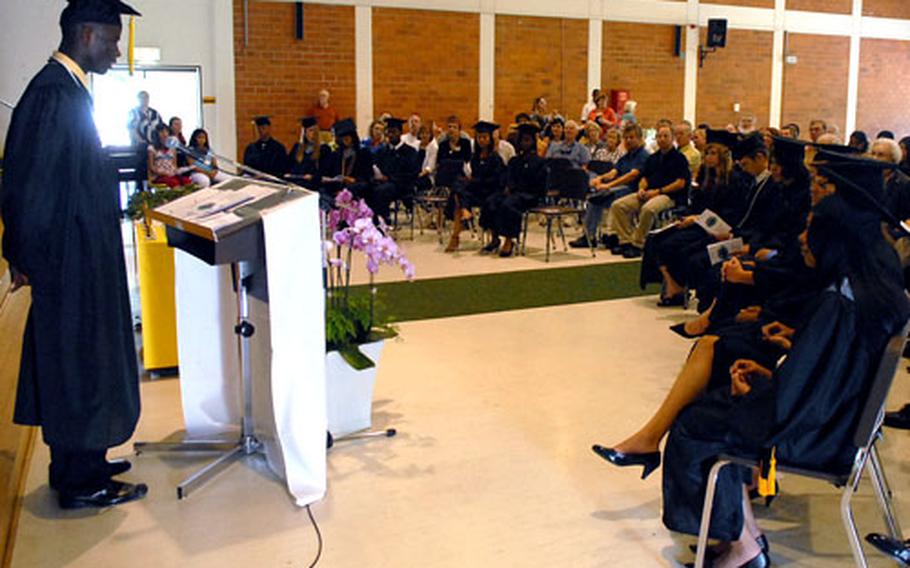 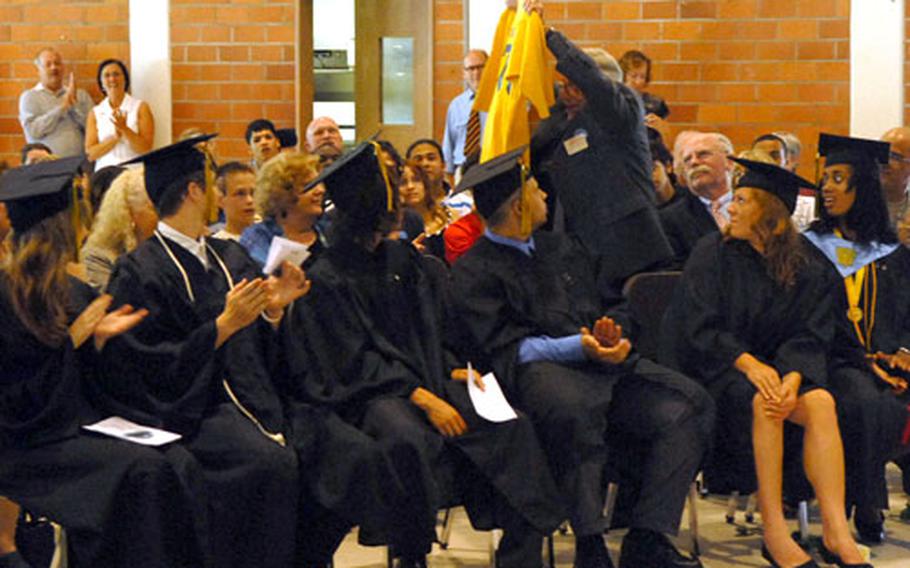 Former faculty member Hal Bardach holds up a shirt that says Hanau 76 on it, during the closing ceremony for Hanau Middle/High School on Thursday. Bardach traveled from the States for the ceremony. 1976 was the first graduating class at the high school. (Michael Abrams / S&S)

HANAU, Germany &#8212; Midway into the closing ceremony at Hanau Middle/High School, the featured speaker asked Hal Bardach to stand and display a keepsake from the early years.

Bardach, who traveled from Arizona for the ceremony, held up a tired-looking yellow T-shirt from the 1975-76 school year, the facility&#8217;s first. Some in the crowd purred with delight. It seemed the former faculty member hasn&#8217;t been able to part with his old booster club shirt just yet.

"It looked newer than I thought it would," high school senior Allan Portillo said afterward.

In Hanau, particularly in the schools, students, teachers and alumni took time out Thursday to reflect on the past and future.

With the U.S. Army pulling out of Hanau for good, this was the last week of school &#8212; period. Many who attended the closing ceremony spoke fondly of the past. Fifteen seniors, who were due to graduate later in the afternoon, did too, though they also have their sights set on the immediate future. Portillo, for example, is heading to Texas, where he plans to go to college.

"Everyone takes a piece of Hanau with them wherever they go," said Samantha Lightle, a guest speaker and a member of the Class of 2005.

"To those of you getting ready to leave Hanau, let me tell you now that Hanau has almost a haunting effect on people," she added. "The memories that you have created here will stay with you always."

Hanau High School opened in the fall of 1975. Before then, students in the area typically went to high school in Frankfurt. The middle school was originally part of the high school, but it moved into its own facility in 1989. With the community closing, middle school students were brought back into the tent for the final year.

The feature speaker at Thursday&#8217;s closing ceremony was Tom Ellinger, the high school&#8217;s first principal. He stayed for five years before leaving for a new appointment. Ellinger has since retired and lives in Florida.

Besides introducing Bardach, Ellinger took his audience back in time to the 1970s and 1980s. At its peak, the high school had nearly a thousand students and a variety of courses were offered, from chemistry to cosmetology to car repair. From 1976 to 1988, the school captured 16 athletic championships, which is a lot, considering the number of high schools a generation ago.

Robert Schloesser, a retired Army colonel who is managing the Hanau closure effort, picked up where Lightle left off, with respect to memories and high school classmates. He still plays golf once a year with some of his old chums.

"There is always an open door when we close a door," he said.