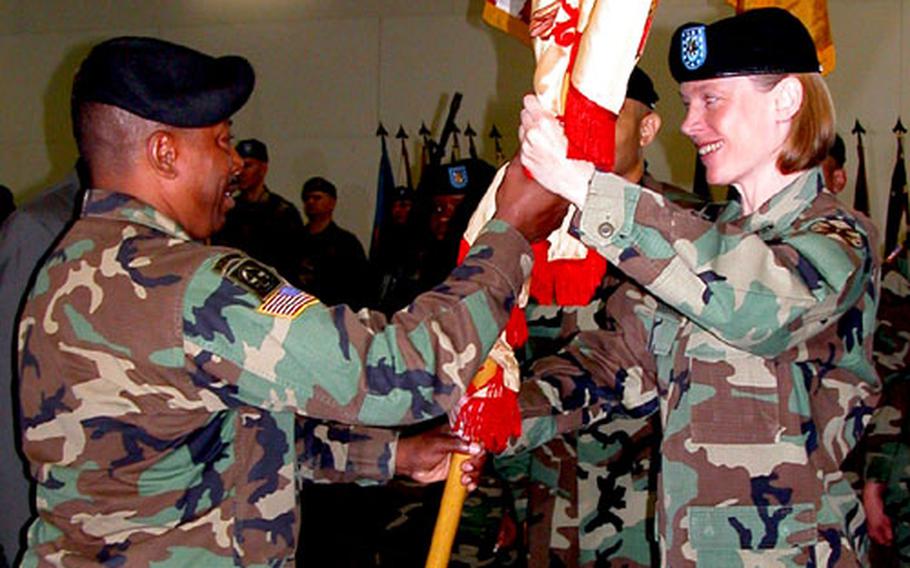 HANAU, Germany &#8212; The commander of the 414th Base Support Battalion gave up her post during a ceremony Thursday on Pioneer Casern to make way for an Installation Management Agency unit merger.

Lt. Col. Amy L. Ehmann said goodbye to the BSB she commanded for two years and hello to the added 104th Area Support Group that makes up part of the new U.S. Army Garrison Hessen.

Col. Herman &#8220;Tracy&#8221; Williams III, the garrison commander, took the flag from Ehmann during the passing of the colors ceremony at the post fitness center to signify his direct responsibility for the Hanau military community within his garrison.

However, Richard Davis, the base operations manager in Hanau, will handle day-to-day business. Davis was part of the passing of the colors ceremony, taking the flag from Williams to signify his role in the newly named unit.

Ehmann will be move to another position within IMA-Europe in Heidelberg, she said during her farewell speech.

USAG Hessen has a full garrison in Hanau and tailored garrisons in Baumholder, Wiesbaden and Giessen, according to Raino Scharck, a 104th ASG spokesman who is moving to the USAG Hessen public affairs office.

Hanau is one of four locations in IMA-E where ASG and BSB headquarters are merging. The other areas are in Heidelberg, Vilseck and W&#252;rzburg.

These mergers will standardize garrison units around the world, replacing soldiers with civilians in support roles and making clear to families what facilities are available to them wherever they are assigned to, Williams said after the ceremony.