Hanau-based soldiers back from deployment 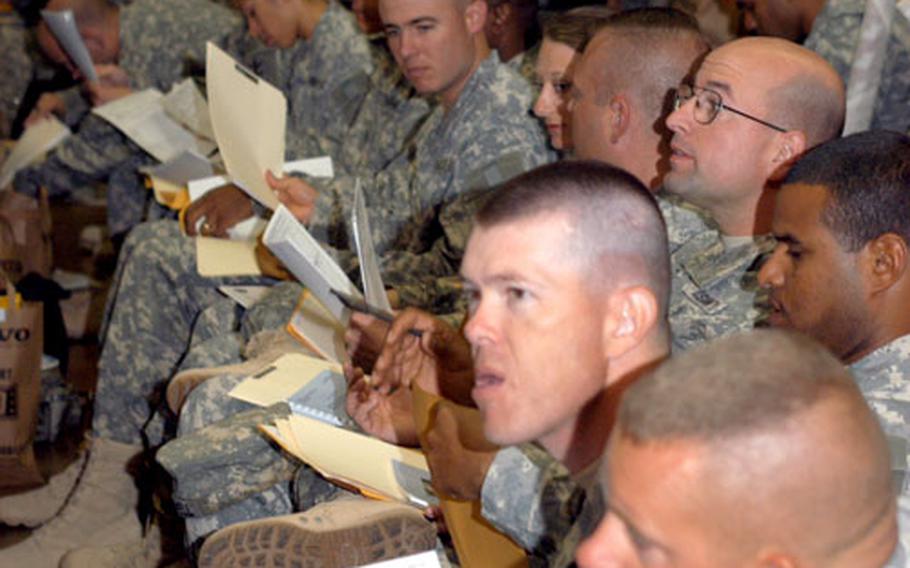 Scores of soldiers with the 130th Engineer Brigade in Hanau, Germany, sift through paperwork on the first day of a reintegration process that all redeploying soldiers go through. About 100 engineers returned Sunday after a yearlong deployment to Iraq. (Kevin Dougherty / S&S)

HANAU, Germany &#8212; Kristen Simco went from teething to teeth while her papa was out. Sean Moon starred in several home videos that mom shot for their man in green.

&#8220;It&#8217;s really the little things that affect you the most, like that first embrace of your spouse or significant other,&#8221; Sgt. Jason Moon said Monday after sitting through his first reintegration briefing in Hanau. &#8220;It really hits home.&#8221;

On their first full day back in Germany, where temperatures are mild and life is much less wild, about 200 Hanau-based soldiers began to take stock of the past year and all that lies ahead.

In Hanau, many units are in the process of inactivating or relocating to a new locale. For example, the 130th Engineer Brigade, the unit that Moon and Staff Sgt. Kelly Simco belong to, is due to redeploy to Fort Lewis, Wash., next summer.

The 16th Corps Support Group, on the other hand, is slated to inactivate several weeks before the engineers pack up and leave.

These moves and others are part of an Armywide restructuring effort that will eventually mean fewer boots on the ground in Europe. The ultimate fate of places such as Hanau has yet to be written, but community officials readily acknowledged there probably won&#8217;t be too many of these large &#8220;welcome home&#8221; ceremonies left to host.

But for now, the goodbyes can wait. Over the next few weeks, a stretch that includes several days of reintegration followed by a lengthy leave, soldiers young and old are getting re-acquainted with family and friends.

Moon&#8217;s son, Sean, is back in Queens, N.Y., with his grandmother. Lynette Moon flew back to Germany to greet her husband Sunday, when his unit, along with the 16th CSG, returned to Hanau.

An intelligence analyst with the 130th, Moon has about six months left on active duty. He already has a couple of job offers.