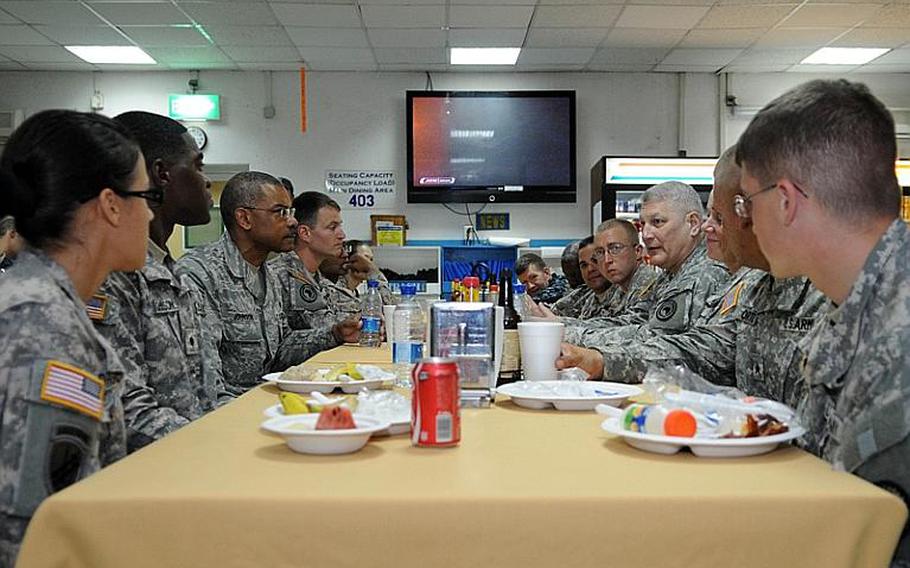 It&rsquo;s a trip he plans to make often.

Ham, who admitted to not being an expert on African security issues, said he is looking to spend nearly half his time on the continent learning about its diverse problems, which include political instability and civil revolts in the north, as well as the persistent threat of Islamic extremists and pirates near the Horn of Africa in the east.

&ldquo;I think it&rsquo;s our nature as military guys,&rdquo; he said. &ldquo;You got to see it, touch it, smell it, to really have an appreciation for what the mission is like.&rdquo;

Ham arrives immersed in his first crisis, as the United States and other nations debate whether to place a no-fly zone over Libya to ground Moammar Gadhafi&rsquo;s warplanes, which have been killing rebel forces. If there were to be U.S. military intervention in Libya, AFRICOM, established only in 2008, would play its first lead role.

On his visit over the weekend, Ham spoke with Djibouti&rsquo;s chief of defense, Maj. Gen. Fathi Ahmed Houssein, about that possibility. Houssein advised circumspection, since any use of military force in Libya would have long-term ramifications.

&ldquo;It was a very good discussion,&rdquo; Ham said. &ldquo;And I think it was wise counsel.&rdquo;

Ham will also confront the ongoing turmoil in Somalia, home to the militant Islamic extremist group al-Shabab, an al-Qaida-linked faction that has generally resorted to regional attacks, but this past summer claimed responsibility for bombings in Uganda that killed more than 70 people.

AFRICOM officials have tried to bolster Somalia's weak Transitional Federal Government, training the African Union's peacekeeping forces there. And the U.S. State Department has provided millions in aid and weapons. In all, more than $200 million has been spent in the past two years.

The peacekeeping force in Somalia &mdash; comprising troops from Uganda, Burundi, and now Djibouti &mdash; is widely seen as the only thing stopping al-Shabab from toppling the fragile but internationally supported government. Ham said the forces have been able to clear al-Shabab strongholds in Mogadishu recently, but he added that those successes are tenuous.

Ham called countering al-Shabab a high priority for the United States, but said it would be accomplished by providing training, equipment and logistical support to the African Union Mission in Somalia, or AMISOM. He did not foresee putting U.S. forces on the ground, explaining that doing so &ldquo;would send the wrong message to our adversaries.&rdquo;

The chaos in Somalia has also allowed pirates to wreak havoc across the Gulf of Aden. Recently, four Americans were killed by Somali pirates after the Americans&rsquo; yacht was seized in the Indian Ocean.

Though U.S. military ships would continue to police the waters, Ham said that merely intercepting pirates at sea was inadequate.

&ldquo;There has to be a whole-government approach,&rdquo; he said, &ldquo;to deal with their finances and to deal with their activities on shore.&rdquo; Ham plans to work with the State Department to increase the Transitional Federal Government&rsquo;s law enforcement capabilities, as well as seek ways to disrupt the flow of ransom funds to the pirates. A stronger Somali economy would make piracy much less tempting in the long term, Ham said.

One certain priority for Ham will be the capture of notorious warlord and cult leader Joseph Kony, whose Lord&rsquo;s Resistance Army has menaced parts of Uganda and neighboring states for decades.

It would be the second time AFRICOM has supported Uganda in such a mission; the first attempt by the U.S. to help capture Kony, under a directive from the National Security Council, failed, with critics complaining that the civilian population was not protected. Many were killed by Kony&rsquo;s army.

&ldquo;If there is any question that there is pure evil in the world, they just have to look at what he has done, particularly to young children,&rdquo; Ham said of Kony. &ldquo; &lsquo;Horrific&rsquo; vastly understates what he has done.&rdquo;

But even in capturing Kony, Ham said, AFRICOM&rsquo;s role would have to be in support of Ugandan-led efforts.

&ldquo;Our role is as a supporting partner, not in the lead in any shape or form. There are some things we can do through training, perhaps through some other means of support, to better enable [Uganda] to track him, to effectively counter him and to ultimately capture him.&rdquo;

In addition, Ham also faces some tough questions about the mandate and intentions of the nascent command, which stood up in October 2008 under the direction of Gen. William &ldquo;Kip&rdquo; Ward.

Ward had gone to great lengths to assure African nations that the United States does not seek to build bases on the continent. The command&rsquo;s headquarters is in Stuttgart, Germany, and Djibouti&rsquo;s Camp Lemonier, a colonial-era French base leased by the United States since 2003, houses about 2,000 personnel attached to a subordinate command of AFRICOM.

Ham said that while he was looking at other locations in the U.S. and Europe as a long-term command headquarters, and will decide on one next year, he would not rule out Africa, either.

&ldquo;Do I think the initial decision to not base on the continent is still valid today? My initial position is to say yes,&rdquo; he said. &ldquo;But I intend to give this an honest and comprehensive look, and I am not willing to discard that option.&rdquo;

And with the Defense Department&rsquo;s budget shrinking, Ham said he would examine the number of personnel within AFRICOM, with an eye toward making cuts if necessary. At the same time, Ham said, he would like to add more civilians to the command. One of AFRICOM&rsquo;s primary goals is to work with other federal agencies, such as the State Department and the U.S. Agency for International Development, and Ham said he would like to see this bond made stronger.

Critics have accused AFRICOM of militarizing U.S. foreign policy in the region at the expense of civilian aid and diplomacy. Ward and others have consistently emphasized that AFRICOM&rsquo;s role is to train African militaries only when requested by governments.

&ldquo;In most activities in Africa, we are in a supporting role,&rdquo; Ham said. &ldquo;I am comfortable with that, and I still think we can be very effective.&rdquo;

Ham also emphasized that he would like to see U.S. troops better trained in African cultures and languages. Ham is asking all AFRICOM personnel, himself included, to spend one hour each day studying a language.

He said he would spend the long plane trips to and from the continent learning French with the help of the language-learning software Rosetta Stone.

&ldquo;That&rsquo;s my objective,&rdquo; he said. &ldquo;We&rsquo;ll see how this plays out, to see if I am personally disciplined enough to do this.&rdquo;