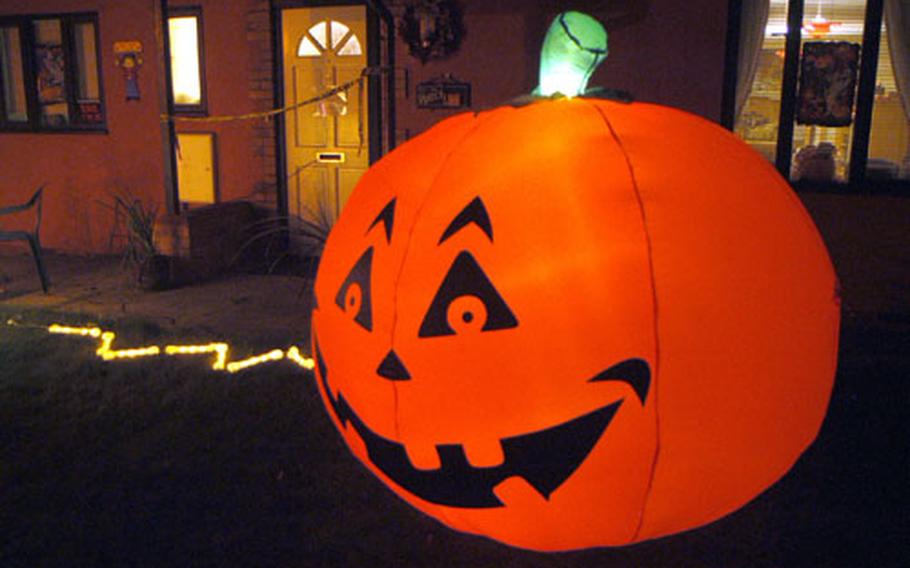 Halloween decorations sit in front of the Ellingsworth home, located in a U.S. military housing area in Thetford. The neighborhood plans to hold Halloween a day early in order to escape the crowds that usually swarm the area. (Sean Kimmons / S&S)

THETFORD, England &#8212; Wary of being engulfed by hundreds of trick-or-treaters again this year, residents of a small U.S. military housing area in this Norfolk town plan to hold Halloween one day early.

The 120-home ungated neighborhood was &#8220;inundated&#8221; with more than 500 people and numerous vehicles clogging the streets last year, according to residents and a memorandum delivered to each household.

This year, children of residents will be allowed to trick-or-treat in the neighborhood Tuesday from 5-7 p.m. Residents wishing to participate in the early event will tape a drawing of a pumpkin &#8212; delivered with the memo &#8212; to their front door.

Concerned parents, who have witnessed the chaos of past Halloweens in the neighborhood, proposed the move in order to facilitate a fun and safe environment for their younger trick-or-treaters, the unofficial memo read.

On top of that, residents say there have been incidents of trick-or-treating youth asking for British pounds, egging houses, smashing pumpkins and cursing residents when they run out of candy.

There are mixed feelings among residents about celebrating the scariest holiday early.

Longtime resident Linda Baumert said she&#8217;d pass out candy to whoever came to her door, no matter the day.

She has heard the negative stories of past Halloweens and of residents pointing the finger toward local British youth.

&#8220;My interpretation of what has happened on Halloween is that the British people take advantage of people passing out free candy,&#8221; said Ellingsworth, who moved from Sohan, where celebrating Halloween wasn&#8217;t as popular among his British neighbors.

The proposal isn&#8217;t a way to boycott Halloween and residents will be allowed to participate on Halloween day.