Halloween is catching on 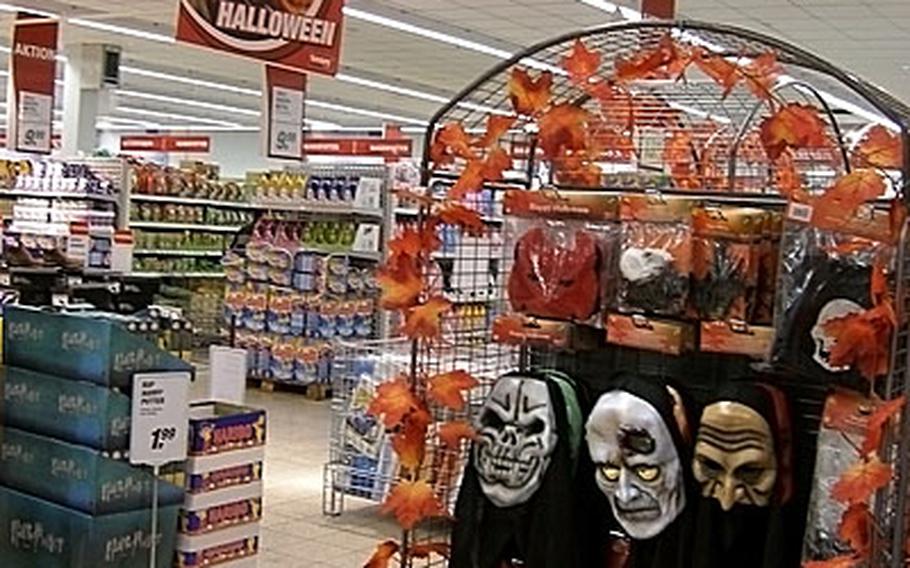 Halloween costumes and candy are on sale in German stores, although the display space is much smaller than at their American counterparts. (Michael Abrams / S&S)

In the past few years, German children, too, have taken to getting into costumes and visiting homes for treats as Halloween&#8217;s popularity has grown in a country that had no such tradition.

Carpenter, who is married to an American, said she enjoys the holiday, though Oct. 31 carried a far different meaning when she was young.

A local artist who was born in Israel and has lived his adult life in Germany also finds himself either handing out candy Oct. 31 or taking his costumed son door-to-door for it.

Martin Fleig, 31, a master carpenter, said he had not totally gotten used to the idea.

In fact, the German Halloween observance seems to have started with parties for adults. The German American Institute in Heidelberg started having costume parties on Oct. 31 some 20 years ago, said director Jakob Kollhofer, who last year dressed as a bull.

The Web site Cracked.com says it created a feature on &#8220;The 30 Most Unsettling German Halloween Costumes&#8221; after finding out that most of its American readers were, regrettably, dressing up yet again as Napolean Dynamite.

&#8220;It turns out that the answer is no ... the German people have little to no skill at coming up with Halloween costumes that aren&#8217;t baffling or terrifying,&#8221; the Web site concluded.

But Kollhofer said that the German American Institute had canceled its party this year because people were not even bothering with costumes.

Halloween, although now an American export, was brought to the U.S. by the Irish, experts say, derived from the pagan festivals of the pre-Christian Celts mixed with Roman Catholicism.

Halloween means the eve of what in medieval English was All Hallows Eve or All Saints Day, according to encyclopedia.com, and has to do with to Celtic practices associated with Nov. 1. That was called Samhain, the beginning of winter and the Celtic new year, the Web site says.

&#8220;Witches and other evil spirits were believed to roam the Earth on this evening, playing tricks on human beings to mark the season of diminishing sunlight. Bonfires were lit, offerings were made of dainty foods and sweets, and people would disguise themselves as one of the roaming spirits, to avoid demonic persecution,&#8221; it says.